Rents might struggle in the near term, but experts at Bisnow’s 6th annual Capital Markets Summit projected a stable market and great long-term fundamentals. Houston was the top performer of Camden’s 15 markets for the last four years, president Keith Oden (with Parkway’s Mike Fransen) said. He’s underwriting 3% rent growth in 2015 (it has been getting 6%) based on the prediction we’ll add 65,000 jobs. But even if we see no multifamily rent growth this year, Houston will still have the best six-year average in his portfolio. He says Wall Street has been very pessimistic about Houston, but in the last 30 days he’s started to see a more balanced analysis. 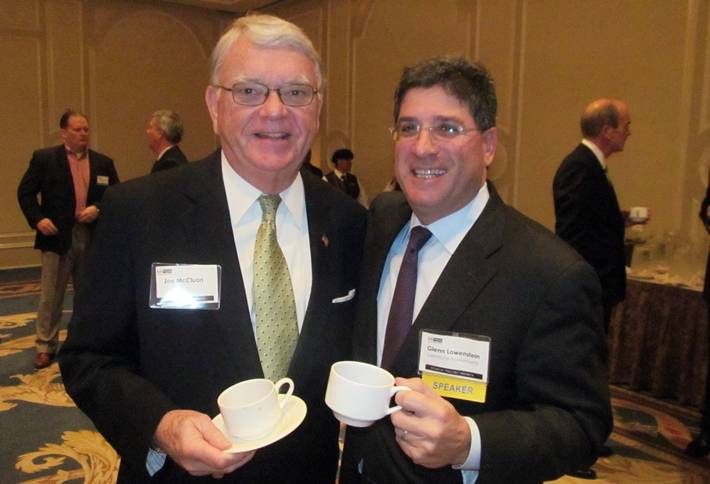 Lionstone Investments CIO Glenn Lowenstein thinks office rents will go flat for a few years and then rise to 3% growth. (He says there’s a 30% chance he’s wrong and rents start falling.) He thinks the Energy Corridor will face some struggles over the next few years, but overall this downturn will change Houston from a fad market to a stable hold for yields. Lionstone isn’t changing its allocations, but Glenn has changed pricing 3% to 5%. One positive: He thinks Houston’s office demand will continue to be one of the best in the world. We snapped Glenn with Joe McCluan, who clearly doesn’t understand how retirement works. 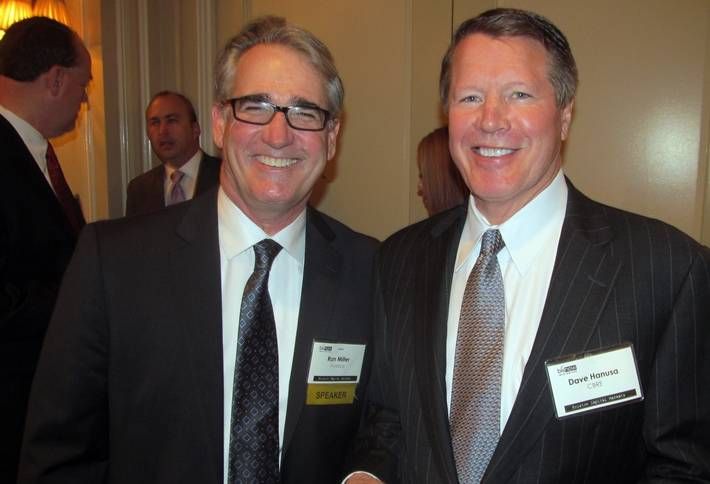 Invesco senior director Ron Miller (looking cheery with CBRE’s Dave Hanusa) doesn’t think this downturn will affect industrial much. He predicts flat office absorption this year, and says underlying office metrics probably won’t have any good news in the next six months. But he doesn’t expect serious pain—institutional money typically has an eight-year plan or longer, and can weather a two-year downturn. Spec projects delivering now will hurt, but he says Houston’s biggest problem isn’t the numbers, it’s the negative perception people have because of our history. If we weather this well, it’ll change everyone’s opinion about Houston forever. And when things improve, it’ll probably happen quickly—in ’09, oil rose $100 in nine months. After a few years as a net seller, Weingarten CEO Drew Alexander hopes to get back to growth mode this year. The firm already purchased one Houston property this year—Baybrook Gateway—and Drew says he’d love to buy more here. He thinks our retail market will do well this year, but says even if the sector is impacted by oil prices, a good shopping center can withstand a cruddy market. Drew (snapped here with Cushman & Wakefield’s Kris Von Hohn) thinks a 50 bps rise in the Treasury would plateau deals, but Ron says over the past two years, an 80 to 100 bps increase hasn’t impacted much, and he doesn’t think it will going forward. 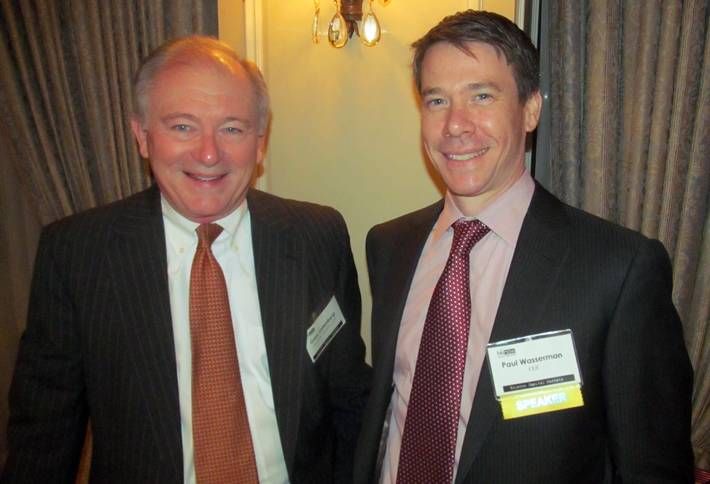 KKR director Paul Wasserman (pictured here with Lehmberg and Associates’ Gary Lehmberg; he just moved here from NY) says the next two years are foggy so cap rates will move up. And for a brief period, buyers and sellers won’t be able to match up, so there won’t be many investment sales. Avison Young principal Darrell Betts says institutional deals in particular will be scarce, partly because those investors are backing off from Houston, but also because most of our institutional product already sold in the last two years.