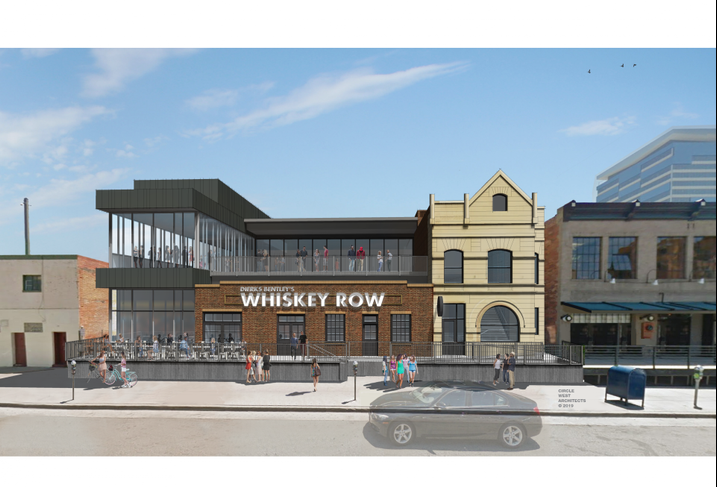 Courtesy of SideCar Public Relations
Dierks Bentley's Whiskey Row is moving into the current LoDo's Bar and Grill location near Coors Field. This rendering shows how owners worked with the city to preserve existing historic structures while implementing a multilevel design.

Denver will become the fifth Dierks Bentley Whiskey Row, with construction and renovation of the current home of Lodo’s Bar and Grill slated to begin in the spring, transforming the historic buildings into a multilevel attraction featuring food, drinks and live entertainment.

The project is a joint venture between Kenneth Monfort of Monfort Cos. and Jason Marcotte and Matt Runyon of Summit Capital Venture Group, which made the announcement following design approval from the Lower Downtown Design Review Commission. Maintaining the historical integrity of the buildings was a priority for the city, investors told Bisnow.

Denver-based Circle West Architects is the architect on the project.

“In the time since I’ve lived here, the city of Denver has reinvested its energy and money into Union Station, which has become an entertainment hub, and then just north of the ballpark has become the RiNO neighborhood, which has been reinvigorated as an entertainment district as well,” Runyon said. “We’re seeking to ... be that kind of connective tissue between all of that. And that’s not to say it doesn’t exist right now, because it certainly does.”

LoDo was the original entertainment district in Denver when it was first founded in the mid-1800s. In 1988, the city sought to revitalize the rundown area by creating a zoning ordinance to encourage historic preservation and to promote economic and social vitality in the area, which is home to 127 historic structures that remained after several buildings were razed in the 1960s and '70s.

Bentley lives and works in Nashville, but has strong connections to Colorado and is excited about the newest location in Denver.

“Colorado has always been a big part of my life and continues to be so as a place where I write and record music, spend time with family and put on our Seven Peaks Festival,” the country music star said. “Selfishly, opening a Whiskey Row there just gives me more excuses to head to the mountains.”

“Our goal was to purchase the portfolio, mostly because we really liked the real estate, but the business aspect of owning Lodo's kind of came as a byproduct of the previous owner wanting to get out of the business himself,” Runyon said.

Runyon said reinvigorating the current location and the surrounding neighborhood isn’t without its challenges, namely remaining relevant 365 days a year, finding an identity in a retail-starved area and building community.

“So when we contemplated buying Lodo’s, we did so really recognizing that the portfolio of three buildings with tremendous locations,” he said. “That’s what the downtown future of Dierks Bentley Whiskey Row is … the LoDo neighborhood has tremendous potential within it.

The multiple-floor concept caters to a diverse population, he said, whether it’s a lunch spot for professionals, a dinner spot for families, or a nightlife spot for a younger crowd. Lodo’s itself has been in operation for 25 years, just a few years longer than Coors Field has existed.

Since the Rockies just signed a 30-year deal to stay at Coors Field, investors are hoping that sustainability will lend itself to the revitalization of the LoDo area.

“We want to take the fun LoDo attitude that I think has existed for some time and bring in a refreshed concept with a little more focus on live entertainment,” Runyon said. “That makes it a prime mixture for why people would choose Dierks Bentley Whiskey Row over other potential spots in Denver when they choose to go out."

A couple of LoDo watering holes have closed their doors in recent weeks: Tavern Downtown and neighboring Cowboy Lounge were both shuttered Oct. 9 after operating near Coors Field for over a decade. Runyon and his business partners said they believe their new venture will be a great catalyst for reinvigorating how the district performs moving forward, including becoming the entertainment hub it once was.

When Ryan Hibbert, CEO and managing partner of Riot Hospitality Group was asked “Why Denver?”, he explained he has always had family and other ties to Denver, even as an Arizona resident, and knows the vibrant demographic here.

“Dierks started the Seven Peaks Festival right outside of Denver and has done very well with it the past couple of years,” Hibbert said. “It showed that the demographics in Denver for country music is is really strong … it was kind of a perfect synergy for us to to look into. Denver is so hot right now, I mean just the tech infrastructure that's getting built in the real estate market and it's so beautiful out there that I was excited to be able to do a project there.”

Having more than two decades in the hospitality industry, Hibbert says Riot does entertainment concepts that speak to the local markets better than just about anyone.

“Our plan is to really figure out what the local demographic likes and wants from an entertainment standpoint and bring that to them, whether that’s high-end country acts, middle-of-the-road country acts or up-and-coming country acts," he said. "We also obviously have nightlife elements like DJs and things for a really well-rounded entertainment concept.”

That means pulling in a professional lunchtime business crowd that will transition to a happy hour crowd, offering a private dining area that can be rented out by local businesses and groups, and then a full dinner service and nightlife.

LoDo is not currently an opportunity zone in Denver, so tax credits are not on the table for potential investors. But new investors hope their project is just one of several that will breathe new life into the historic area.

“It'll be exciting for people to see what we can bring in,” he said. It's really next level and I think people will be really blown away by the level of quality of food that we bring in, the craft cocktails and the live music.”