“There’s certainly going to be a lot of pain in the retail sphere, and I think we’re going to see that landscape change quite a bit.”

That’s according to Crescent Communities Managing Director Ben Krasnow, who was a speaker Thursday at Bisnow’s Developing in Denver Amid Coronavirus webinar, joined by EXDO Development Group CEO and Managing Partner Andrew Feinstein. 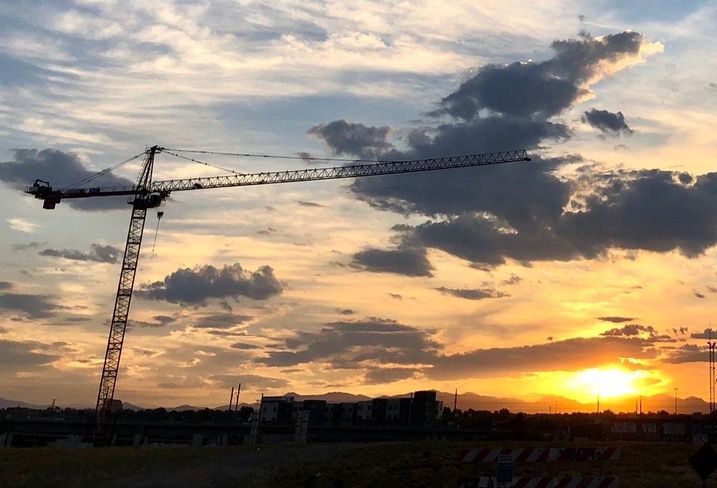 Bisnow/Kelcey McClung
A construction crane in Denver against the sunset.

Krasnow said that the way retail will be incorporated into larger multifamily projects could change in the future. There has always been a challenge with the valuation of retail space in larger projects, he said, but that’s going to be even harder now.

"There’s going to be a lot of pain in the retail sphere, and I think that we’re going to see that landscape change quite a bit, even to the extent that retail is incorporated into larger multifamily projects," he said. "There's challenges with valuation of the retail space at this point, there's always been some challenge there, but it's going to be even harder now."

Feinstein also said retail is in for a rough time. In RiNo, rent for retailers had been increasing dramatically, and there was already a "big punch" coming this year via a property tax increase. With growing rent, increased property tax and now the coronavirus crisis in the mix, predictions for the sector's short-term prospects are mixed.

Feinstein said it’s hard to imagine many companies will be looking to lease brand-new, Class-A office space right now. “I’m still bullish on multifamily, but I’m not bullish on retail or office leasing, unfortunately,” he said.

Multifamily velocity has been heavily based on job growth, and Denver has had healthy job growth and in-migration. But with unemployment skyrocketing, Krasnow noted that nearly all job growth since the Great Recession has been wiped out.

“So, how that affects Denver should be really interesting,” he said, adding that fewer people moving here for new jobs could stress CRE across the board.

Despite that, Crescent will continue to move forward with its business plan, Krasnow said, as projects that break ground soon or are in early development likely won’t be completed for another one to two years.

Many developers in metro Denver said they are pleased that construction has been deemed essential by local authorities, allowing development to continue.

“You can’t just stop every single corner of the economy,” Feinstein said.

He added that most construction is taking place outdoors right now, creating plenty of room for the construction workers to move about while socially distancing.

Still, many construction sites have taken measures for additional worker safety, including having large hand-washing stations on-site and requiring workers to wear masks 100% of the time. Krasnow said that some sites are even taking the temperature of employees.

Though many projects in Denver have continued on schedule, not all construction sites nationwide have been as fortunate. A recent Associated General Contractors of America survey said that 40% of construction firms that responded reported layoffs and more than half have had projects halted amid the economic impact of the coronavirus.

But in Denver, cranes are still moving and projects are still going vertical. Particularly in RiNo, construction sites are still active as many multifamily projects continue to develop.

Feinstein and Krasnow said they expect development costs to be affected by the current situation, with costs coming down “precipitously.”

“I believe we will see a reduction in cost all the way up the line in development whether its construction, architecture, consulting, engineering or environmental remediation,” he said.

There may be one silver lining locally: Krasnow said that while deals are getting delayed, dropped or put on hold indefinitely as a result of this pandemic, the backlog for contractors is drying up.

“It’s really hard to quantify right now as to what’s going to happen,” he said. “We certainly hope and think that there are savings that are going to come due to the fact that work is trailing off.”