Even before the coronavirus, data indicated the market was past its peak, a local expert said this week.

Rick Schuham, vice chairman, central region lead and director at Savills, said the company's Q1 market report for Denver showed inventory and availability had risen year-over-year, while quarterly leasing activity was down. Schuham said that those statistics are only “lightly” touched by the coronavirus.

“Before all of this went down, our perspective was that things were flattening,” Schuham said. Velocity was slowing a little bit, though nothing dramatic, he added. 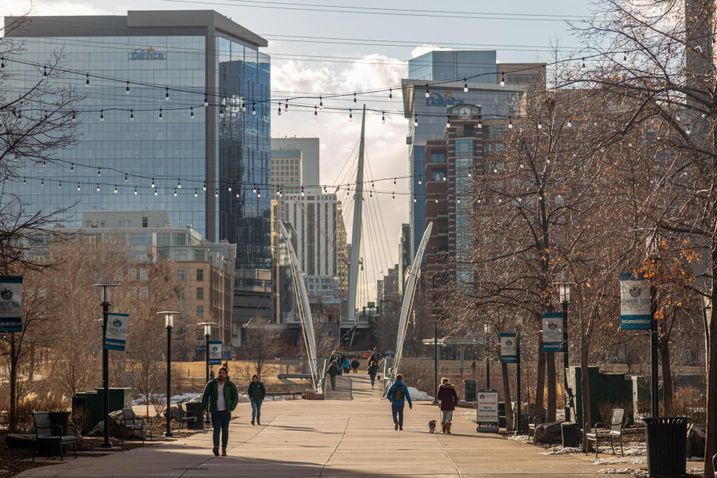 Now, Schuham said it’s tough to say what the market looks like because there really isn’t one.

“Velocity is off 90% to 95%, meaning some projects that were active are finishing because they have to, and anybody that doesn’t have to get to a decision is taking their time,” he said.

CBRE’s Q1 market report shows steady fundamentals in Denver’s office market. The average direct asking lease rate was up 1.6% year-over-year and direct vacancy was down, but absorption decreased 3.2% from Q4 2019.

“Overall, the fundamentals were strong in Q1 2020, given that the statistics do not yet reflect the far-reaching impacts of the coronavirus and its adverse effects on Denver’s business activity,” CBRE First Vice President Nicholas Weld told Bisnow.

Local highlights of the quarter include the $400M sale of Denver City Center by Shorenstein Properties LLC to New York-based Brookfield Properties, the largest single-asset transaction in over a decade, CBRE said.

Both reports also touched on COVID-19, which spread rapidly across the United States at the end of Q1. CBRE’s report said that office-using employment may be “less negatively affected than in recent recessions,” and also predicted an “unusually swift recovery” that could begin in Q3.

Weld said that it’s still too early to predict an entire next quarter, as each week has provided a different set of circumstances that shift the paradigm.

“As government mandates are adjusted in Denver, we will be watching closely to see how the business community reacts and landlords respond,” he said. “In the near term, the additional space needed per employee to maintain social distancing could temporarily offset some of the effects of headcount reduction and cause a delay in some excess space becoming available.”

Weld said CBRE expects Q2 will begin to show a softening of the Denver office market because of the pandemic. Leasing velocity will likely decrease and sublease availability will increase.

“The supply of new construction remained elevated at the end of Q1, representing approximately 4.7% of the total Downtown Denver office market,” Weld said. “This closely resembles the same proportionate share of new and existing product at the height of the market in Q4 2008.”

Weld added that speculative projects have only reached 6.6% of pre-lease commitments as of Q1 2020, and that it would be interesting to see if the “flight-to-quality trend continues” as the office market opens up.

Savills’ report said that as a result of COVID-19, increased availability and a flattening of rental rate growth is anticipated, though it's too early to understand the full impact on the market.

“We bet this one will be no different,” Schuham said. “Before rents start to reduce, typically you’ll see an increase in concessions. That’s an erosion of their return, but to tenants that’s meaningful. We’re already seeing upticks in free rent in those deals that are viable to getting done.”

The increased availability is likely to come from oil and gas companies, as they have been hit especially hard by the current pandemic.

Weld said that any “weakening” reflected in the Q1 office report was driven mainly by the energy sector, due to oil pricing reaching historic lows.

“We do expect Q2 and Q3 to more accurately portray a recessionary environment due to sharp declines in GDP as well as employment across all sectors,” he said.