Denver's Cherry Creek has established itself as a burgeoning corporate destination, with a busy central area and a roster of retailers and finance companies. But can it shift into the next gear to evolve and eventually secure a marquee-name public company? 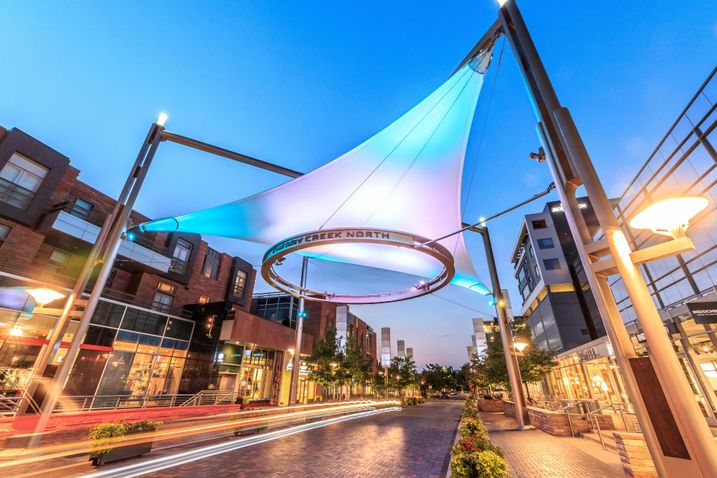 Cherry Creek is well-known for its shopping, but it is also a popular location for other types of business. With walkable amenities, restaurant options, an upscale atmosphere and a pedestrian-friendly streetscape, it’s a clear winner for many corporate users. In fact, its success as an office-using business destination has driven a demand for more office space, pushing up the demand for office space by 36%, or 1.8M SF, since 2014.

“These [large wealth management firms] are some of the largest offices in the country; not by people, but by assets under management,” said BMC Investments CEO Matt Joblon, who points to the area's status as one of the wealthiest areas in the state.

Could Cherry Creek attract a public company of significant size? Some market players say the space available would have to change first.

“Part of the issue in getting a large corporate user [is] there’s no large office with really large floor plates,” Joblon said.

Companies don’t want to be spread out over seven or eight floors, he added, and Cherry Creek has few options left for development or hundreds of thousands of square feet for a single user.

“But on the flip side, these buildings are filling up with private equity, investment, real estate and wealth management companies,” he said. “They only need 10K SF.”

The floor plate constraint could be a barrier to entry for a well-known, public company. Thus far, most landlords in Cherry Creek aren’t scrambling to fill vacancies.

“I don’t know if that’s going to happen or not,” Joblon said of Cherry Creek eventually scoring a large public company.

“But, I know the demand for companies between 5K and 50K SF that are privately held is robust.”

BMC Investments has several Cherry Creek projects, which Joblon said they continue to fill with those types of users. Both Cox and Joblon echoed that while Cherry Creek may not check every single box for a larger public company, it has plenty of healthy demand for smaller users. According to CBRE research, there’s currently 2.6M SF of net rentable area in Cherry Creek, and absorption in Q4 was a healthy 36K SF.

Another limitation of Cherry Creek? The lack of public transportation. Many companies look for that as a resource they can both use and market, Cox said, even in a car-dependent region like Colorado.

“But, I still think no matter where you are, Denver is a driving market,” he said. “I would say the makeup of tenants in Cherry Creek are less likely to take public transportation than [on a broad, general view] the tenants in North Denver Tech Center or downtown.”

The lack of light rail or heavy RTD bus infrastructure is a drawback, he said, but it’s not killing the submarket. There are communities that thrive without light rail, Joblon said, and it is possible to plan a sustainable, vibrant community without it, with transportation likely to continue to evolve over the next 15 years.

LeMasters said he doesn’t think the area can look to RTD to provide answers to Cherry Creek’s public transportation situation.

“I think the key for us will be finding ways to connect to Colorado and University stations,” LeMasters said. “As well as Civic Center Station and Union Station, in order to get people here in an efficient way.”

However, LeMasters also said that people are finding their way to Cherry Creek through multiple other modes of transportation. The numbers back that up: The Cherry Creek North BID found that in the second half of the year, the area had a daily visitor count of anywhere from 12,000 to 19,000 people.

“When you have a great destination, people will find their way there by hook or by crook,” he said.

The market will continue to evolve, and new infill developments will add to the heart of Cherry Creek North, Cox said. Whether or not the area is able to secure more public transportation infrastructure, or develop larger floor plates, it's unlikely the area will have difficulty attracting future tenants.

"Our best days are still ahead of us,” LeMasters said.