Serving food during the coronavirus pandemic is not an easy task for any Dallas-Fort Worth establishment, and Legacy Hall at Plano's Legacy West development was forced to pivot aggressively. But the three-year old food hall facility was coincidentally already preparing for the changes it had to make to stay afloat. 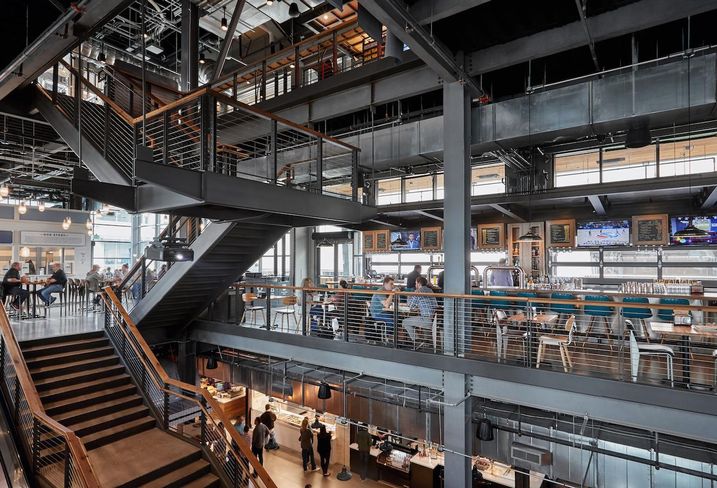 "The mobile ordering platforms that we onboarded in March, we accelerated that by about two months," The Food Hall Co. Senior Vice President of Marketing David Daniels said. "We onboarded a new [point of sales] system, which allowed us to enable mobile ordering, and we were able to thankfully accelerate that process and that has helped. We [also] leveraged our third-party delivery [services]."

Legacy Hall opened in 2017 and then introduced The Box Garden at Legacy Hall beer garden venue, creating a live music and entertainment site in the heart of Legacy West in Plano.

The pandemic hit hard on the three-story facility filled with numerous food concepts, which served items to an average of 2 million visitors a year in 2018 and 2019.

"We all feed off of each other, with us being a primary traffic driver," Daniels said of restaurants and retail in Legacy West. "But with that said, traffic is down across the board. Everyone is aware of that. The only thing that is going to change is consumer confidence in terms of safety, and [customers'] ability to come out and enjoy a meal and to be able to shop and not be in a position where they feel like they are vulnerable to catching the virus."

Legacy Hall is operating at the governor's mandated 50% capacity level. While the governor's decision to carve statewide restaurant capacity back from 75% stunted traffic a bit in June, Daniels is seeing more positive traction at the site.

But how does a facility like a food hall that has 59K SF, 40K SF of that inside and another 19K SF outside, make today's fearful clientele feel safe picking up food or sitting down for a meal?

Daniels said tables have been removed throughout the facility to ensure social distancing is carried out inside and within the exterior terraces and box garden, and staff members are issued lanyards every day to indicate that they've passed a routine morning health check-in test.

"I think the biggest piece of it is you can't just say you are doing something," Daniels said. "You can't just communicate on social media that you have measures in place. You have to demonstrate."

As for the future, the Food Hall concept is expanding, with Daniels already working on another 110K SF location in Nashville set to open next year.

"We are extremely bullish," Daniels said of the food hall concept, adding that a few other U.S. deals are already in the works that have yet to be announced.