One-Quarter Of All U.S. Office Construction In The Past Decade Was In Texas

Texas metropolitan areas have been leading the nation in office construction and have no reason to pump the brakes on future construction projects since demand only continues to grow, a new report from CoStar says. 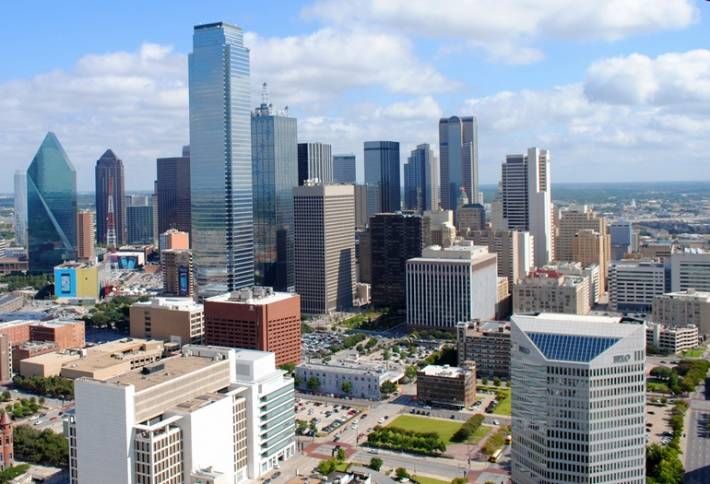 “We continue to be on top of the list in terms of best places to do business. We also have a highly skilled labor force and favorable tax conditions. I would say it is a combination of things that are driving the Texas economy.”

Texas’ top three office markets — Houston, Dallas-Fort Worth and Austin — housed roughly 104M SF of the 430M SF of new U.S. office space that came online during the last decade, CoStar data shows. In totality, Dallas-Fort Worth, Austin and Houston accounted for 24% of the nation’s new office construction pipeline during the 10-year span running from 2009 onward.

DFW in particular is keeping that pace up: Roughly 7M SF of office space is under construction in Dallas-Fort Worth, with 4.7M SF scheduled to deliver in the second half of 2019, Younger Partners Co-Managing Partner Moody Younger said.

Corporate relocations from other states, alongside intermarket moves from older to newer properties, have kept the office construction pipeline robust in Texas.

That heavy allocation of build-to-suits and large corporate relocations has meant new supply is absorbed quickly. Of the 7.1M SF underway in DFW, 69% already has a user lined up, Younger said. 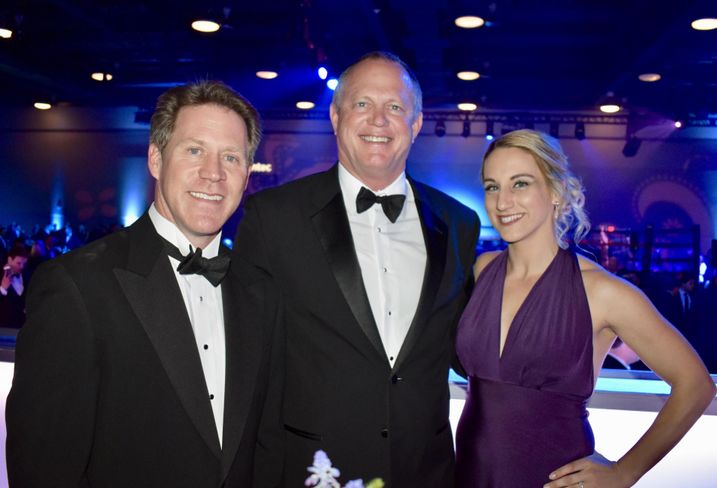 “On a regular basis, I get asked why we are building so much office product in the Dallas/Fort Worth market,” Younger said. “Our total vacancy rate typically runs twice or more the national average and yet our construction pipeline is greater than almost every other major office market in the country, any given year, for the past 40 years.”

He explained this dichotomy by looking at the actual amount of new space available when compared to 1980s or 1990s office products.

“If you look at the inventory of available space and where it is concentrated, you quickly see that DFW doesn’t have so much of an overbuilding problem as it does of a demolition problem,” Younger said. “Unlike most large office markets (which typically have substantially higher land prices) we don’t tear down old inventory, we just expand northward and build more new product.” 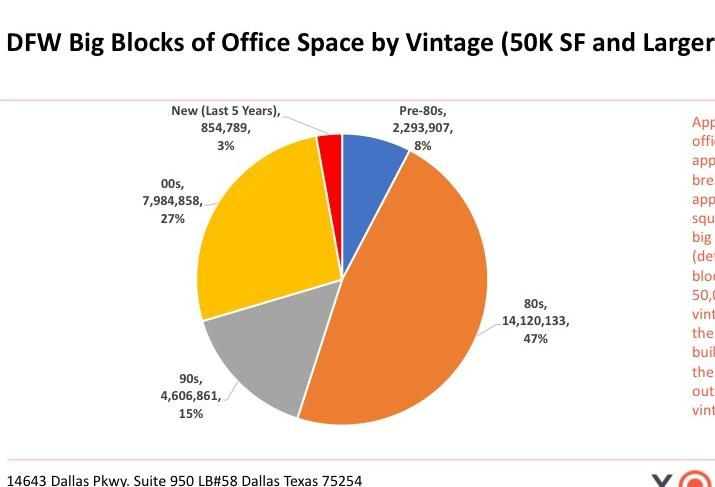 While the DFW market appears to be drowning in office supply, data from Younger Partners shows that there are limited new-build big blocks of office space available that are 50K SF or larger.

Many of the larger available office spaces are 1980s products — those represent a whopping 47% of the big office blocks available in DFW. Office product that is five years old or less represents only 3% of the local DFW market.

“Given this low availability of new construction, developers have little incentive to pull back,” Younger said. “In fact, most seem to have a sense of urgency to capture the existing demand for new space. Almost every office developer currently has a project underway or has announced plans for additional projects to begin construction within the next year.”

The underlying fundamentals support this rush, and analysts expect construction to continue apace in Texas, and particularly DFW.

“DFW is projected to continue trending positively in employment growth, and office jobs are forecasted to hover around a 1.5% to 2% increase on a year-to-year basis over the next 10 years,” Cushman & Wakefield Research Director Ching-Ting Wang said. “With this increase in office employment, new office construction is likely to continue, albeit at a slower pace compared to the past few years.”