CRE Industry Needs A Zillow-Like Platform Of Its Own. VTS Says It Has The Solution

VTS is setting out to change the landscape of CRE analytics.

VTS co-founder and CEO Nick Romito said the commercial real estate industry lacks a tool like Zillow, which provides investors, tenants and brokers in the residential real estate live market comparables and data points to assess the strength of each asset.

But he thinks he has invented one. 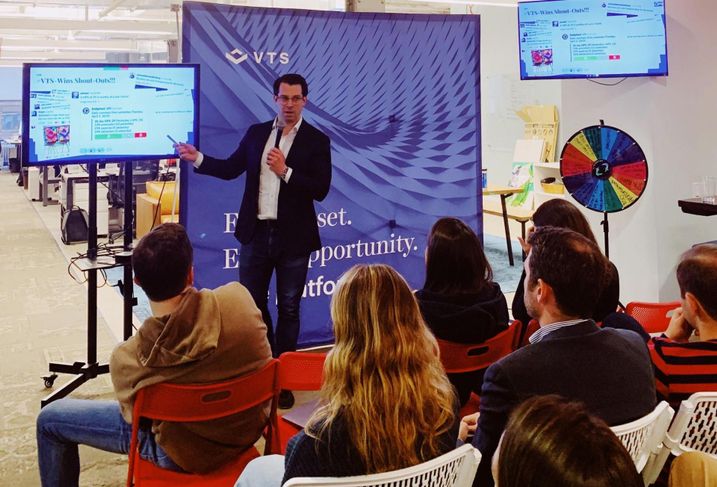 Romito is pitching his company's portfolio of analytic platforms, including VTS Marketplace and MarketView as intelligence products that will give minders of CRE assets enough granular data to know how much a building should cost, lease for, pay in overhead and expenses — and when an asset sitting in a market might face a drop in demand.

To reach the full Zillow effect for commercial real estate, VTS just needs to keep adding more data from clients in Dallas-Fort Worth, Houston and other markets nationwide, Romito said.

VTS is already exploding in DFW and Houston. The company’s MarketView product is in testing mode in Houston. And in DFW? Romito said he has cornered 60% of the North Texas market capture, but he’s aiming for 100%.

Romito sat down with Bisnow to explain how his analytic products work and what his CRE clients expect in terms of data analytics from the VTS platform.

Romito: I would say Dallas is a really strong market for us. Our market share is probably north of 60% in terms of using the product, so it’s going to be all of the local players like Stream Realty, as well as the larger more institutional folks … the Invesco’s, and even Granite Properties. It’s both the larger institutions as well as the local players that are VTS users, and they have been for a long time.

Bisnow: Sixty percent — that is a fairly large market share. Do you see your footprint growing even stronger in DFW?

Romito: We are adding hundreds of millions of square feet to the platform every single quarter, so we are for sure growing in Dallas in a pretty big way. And, the market there is becoming more and more institutionalized, and many folks acquiring those assets are already VTS customers, so we tend to grow that way. That tends to make our product pretty viral. There’s a lot of development happening; Downtown [Dallas] looks very different than it did five years ago.

Bisnow: When your clients bring a new building into their portfolio, how you are able to build analytics around those particular properties?

Romito: We actually become the workflow tool that they use to negotiate all of the deals and the transactions that they are working on. A lot of the analytics are coming from their actual usage and the deals that they are working on. In addition to that, we are integrating with all of the other systems that they do use. Whether it’s an accounting system or a budgeting system, all of that data gets pulled into VTS on a nightly basis. It’s kind of a one-stop shop to see all of their information in one place, but also a platform to kind of do their job much better using what has now become usable information versus data living in separate systems.

Bisnow: What is the data your clients are most interested in?

Romito: I would say they want to know what kind of tenants are growing and shrinking. For sure that’s a big one. Is it tech? Is it law firms? What are the kind of tenants in DFW that tend to be growing and migrating from one market to another? I think another one is people want to see how far outside downtown folks are willing to go to do a good deal. The industrial market is uniquely hot right now, especially in Dallas, so there is almost insatiable demand for product in industrial. It’s a very competitive market.

With that being the case, I think people are very eager to understand what kind of tenants are currently in the market looking for space, so you can position your assets much better to hopefully win those deals.

Bisnow: Do you have a recent story where you saw VTS data either drive a transaction or drive a decision on where one of your clients wants to go or what they want to purchase or how they want to manage a property?

Romito: When oil prices dropped a couple years back, our customers [in Houston] called us, and they were very excited to tell us the story. After oil prices dropped dramatically — everyone in Houston probably remembers that — the market started to slow down dramatically. We had a bunch of customers who asked their agents or their peers in the market: "Do you guys feel like the market is slowing down as a result of this?"

And everyone’s response was kind of the same, which was it feels like things are still really strong.

What our customers did was they went to VTS and they looked at something as simple as tour activity or showings. What they saw was tour activity basically fell off of a cliff, which meant the market was slowing down dramatically. But, because we are the only place you track that, you didn’t see it anywhere else.

So what this specific customer did was he stopped negotiating pretty much every deal he had out, he signed those leases and probably saved himself $5M because every other deal he had out where his asset managers kept negotiating, those deals never happened because the market slowed so bad people weren’t comfortable.

Bisnow: Are you still interested in growing your DFW area client base?

Romito: Oh, yes. The next two products that we are releasing are ones that we have to have a very large percentage of the market for them to be viable. We have our Marketplace product which is going to be effectively — think of it as as Zillow for commercial real estate for tenants to find and transact on our platform as well as tenant rep brokers. So we are going to want to have every piece of space in the market live. And that will be our goal going into next year is to have pretty much every asset in Dallas on VTS.

Bisnow: How would you describe the second product, MarketView?

Romito: MarketView is our analytics product, so it lets you benchmark your performance versus the market. We are in beta [testing mode] in Houston. Houston is our first market.

Bisnow: How will clients be able to leverage the MarketView product as something that will be beneficial to them?

Romito: It will be the first time clients can actually log into a system and see how their specific buildings are comparing to the market or their competitors. Understanding things like are we achieving higher or lower rent than every competitive building in the market? Is it taking us longer to do deals than the other buildings in our submarket? Is it costing us more to acquire tenants by giving away concessions like free rent?

We have an algorithm that will actually look at all of the assets, and it will tell you how you compare to seven buildings that you are comparable to in your submarket. But, it won’t tell you what buildings those are, which is a very common way of doing this in other industries. It just hasn’t come into commercial real estate yet because there hasn’t been a player like VTS that has had this much market share, but it’s probably the most requested product from our user base.

Bisnow: What is driving the request for more data?

Romito: It’s probably the only industry in the world left where you have no real way of understanding how you’re doing versus competitors.

If you are in the hotel industry or residential, every piece of data is completely transparent. But in commercial real estate — in office, retail and industrial — it’s an opaque market. Comps are not public. Information in general is not public. Before VTS, people were managing everything on spreadsheets.

There was no difference between 1947 and 2011. We used to always joke with brokers that the biggest change our industry saw before VTS was going from fax to email. There is this hunger or starvation for information because people feel like in 2019, it should just exist. It’s very much an underserved market.