2013 was a dynamic year for office, and Transwestern's Reid Caldwell breaks down three trends that stood out. (They sure beat the sagging pants and the tongue wagging that were also rampant this year.)Â 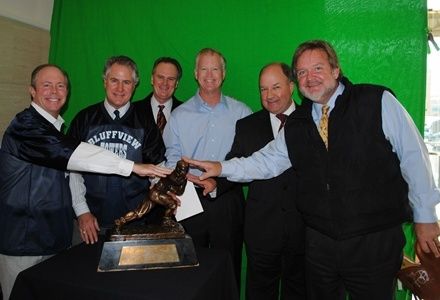 With the exception of certain submarkets (think Preston Center) tenants demand more density. What was 3:1,000 in the '80s became 4:1,000 in the '90s, and is now at 4 to 5:1,000. (We're all way more comfortable inside each other's personal space.) This, along with close proximity of the parking, is causing problems for a number of the downtown buildings, Reid says. That's why Uptown outperforms some downtown buildings, he says. We talked with Reid yesterday at a Heisman event to promote the CDI-owned Bluffview Tower (3890 W Northwest Hwy in Dallas) where he and colleagues Scott Walker and Blair Huddleston are trying to fill 40k SF of space in the west tower. Scott brought his dad's (SMU's Doak Walker) 1948 Heisman Trophy for photo opps. Here's Reid with Scott, JLL's Steve Jarvie, Calvin Hull, and Greg Burns, with CBRE's Lance McIlhenny (who happens to be the most successful QB in the Southwest Conference and SMU history with 34 wins.) 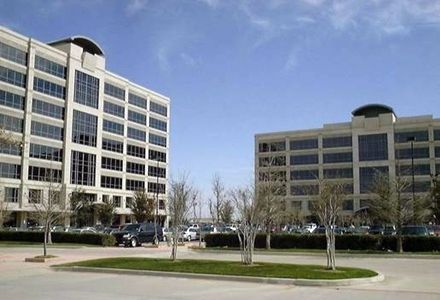 DFW has been the beneficiary of companies escaping bad economies in other states. Texas has all the right moves: we're a right-to-work state, have a favorable tax climate, and possess the quality of living, Reid says. (We also now have ice!) Some good examples: State Farm in Richardson, Neovia Logistics Services (pictured) in Las Colinas, and Copart along the Tollway. Reid says he's felt DFW was ripe for relos for years and is now seeing the results. Dallas has the stats, too. It ranks fifth among US cities for the lowest cost of doing business. 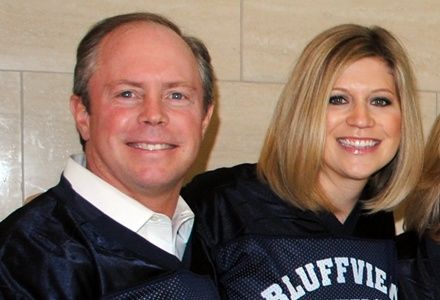 Reid (with Blair at the broker event yesterday) tells us rental rates are increasing. One reason: Construction has been held in check because of lenders' requirements for the amount of recourse needed. "That's good, because it allows markets to tighten," he says. Rental rates for the new projects will also be higher because construction and land costs are going up, too. That means rental rates will also cost more. A couple of years ago, no one would imagine paying $30/SF-plus, but that's not out of the ordinary today. And the triple-net rental quote will become more prevalent during the next four to five years, he says.