Lindale Economic Development Corp sold an almost 18-acre site in Lindale Industrial Park to Tyler FXG, a subsidiary of Kansas City-based Jones Development, with plans to build a 163k SF distribution center for FedEx Ground. MW Builders of Temple will serve as the GC. Construction will start immediately it's slated to open July 2014, says City of Lindale EDC prezJohn Clary(here, with city councilmanBob Tardiff at the ICSC event in Dallas last fall.) The new distribution center will replace two existing faciltiies nearby and is part of FedExs nationwide network expansion to boost its daily package volume capacity and enhance the speed and servicecapabilities. 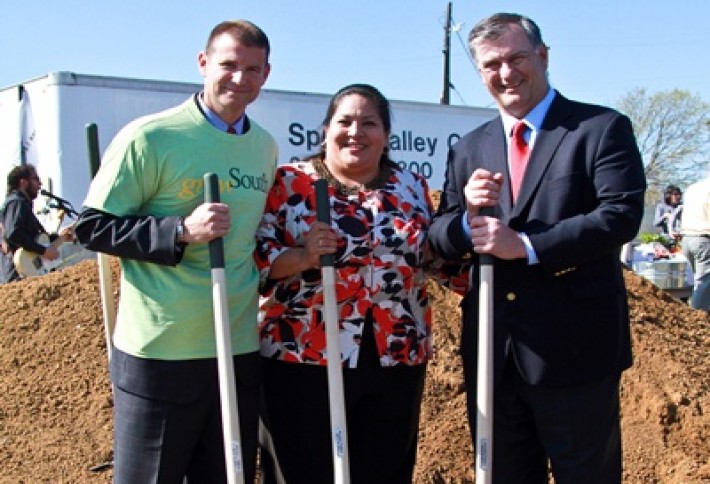 All 20 of the ceremonial shovels at the Sylvan | Thirty groundbreaking yesterday turned some dirt as local elected officials and business leaders welcomed the new mixed-use center from Oaxaca Interests and Wood Partners. Heres Oaxacas Brent Jackson, Dallas City Councilwoman Monica Alonzo, and Dallas Mayor Mike Rawlings.(Thanks to Beau Bumpas for the photo). By years end, the first apartments and the first retail building are scheduled to open.

More than 1,200 runners participated in the recent 2nd Annual Form Follows Fitness 5k at the new Klyde Warren Park benefitting the Dallas Center for Architecture. Heres Team Skanska, which finished fifth out of more than 30 teams, and had three members taking the first, second, and third places n their respective age groups. We assume some people love that runners high. We love the finish line.

If youre on a DART train, dont worry, you wont be in the dark. But, the Dallas Area Rapid Transit HQ will go dark (the lights in the restroom may stay on, if you need to go) for the sixth straight year between 8:30 and 9:30 p.m. Saturday night as part of Earth Hour 2013. A new 40-foot compressed natural gas bus made its debut in January. It is the first of 459 to be placed into service over the next three years to replace older buses that have reached the end of their useful life, a DART spokesman tells us. Newmark Grubb Knight Frank property management services employees and clients also plan to power down equipment and lights during Earth Hour.