Here's What It Takes To Win The Amenities Arms Race

In the amenities arms race there are the basics: fitness centers, conference rooms, food courts. And there are the luxury amenities like rooftop decks and greenspace. Today we highlight amenities that go above and beyond the call of duty as building owners and property managers work to fill their buildings. 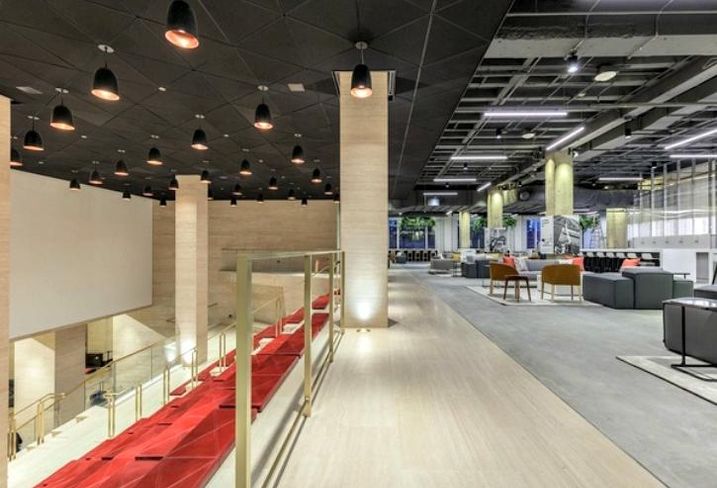 Cushman & Wakefield EVP Andrea Saewitz says the Grand Stair is the centerpiece of the first phase of Merchandise Mart’s $40M renovation. The majestic 50-foot-wide marble staircase is more than just a set of steps connecting the first two levels—it features stadium seating (shown) and a lobby wall where movies can be projected. A lounge sits atop the staircase, and the stairs themselves serve as a collaboration area for tenants. The renovations also feature a modernized urban eatery titled the Food Hall, a multi-purpose tenant lounge with spectacular views of the Chicago River and skyline, and a 5k SF outdoor greenspace along the riverfront. Andrea says building owner Vornado wanted to transform the Mart’s common areas to both complement the creative energy of the building’s tenants and impress visitors, while reflecting the functionality and aesthetics of the 86-year-old landmark. Andrea adds that the renovations serve as a message to the market that Vornado is a motivated owner that is investing in modern amenities for the Mart, giving the iconic Chicago building the updates it deserves. 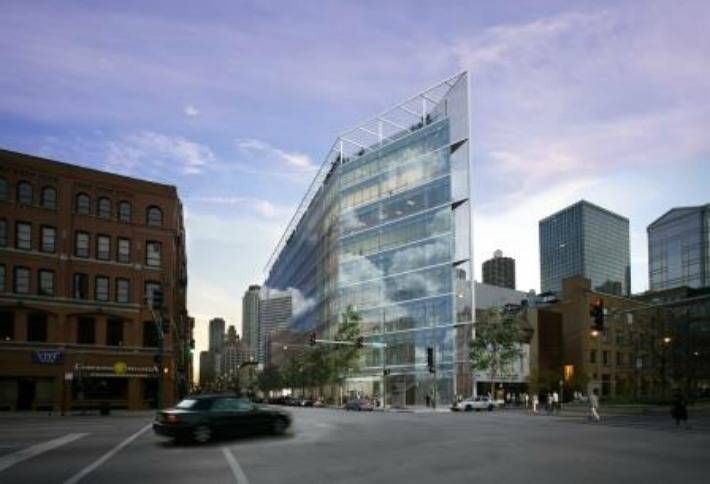 Alter Asset Management president Sam Gould says his firm often finds itself in a tight spot because it runs smaller buildings where the cost for amenities is more difficult to rationalize than in larger assets, especially in a market like Chicago where tenants are looking at having the latest and greatest amenities. But there are ways to satisfy those demands. Sam says there are three separate entrances, and street identities, at 111 West Illinois for WeWork, Salesforce and the Erickson Institute, which owns a portion of the building under a reciprocal easement agreement. Sam adds that this is rare in larger buildings. Also unique, for a smaller asset, the building has three restaurants with differing price points: Roka Akor, Enolo Wine Cafe and Olive Mediterranean Grill. 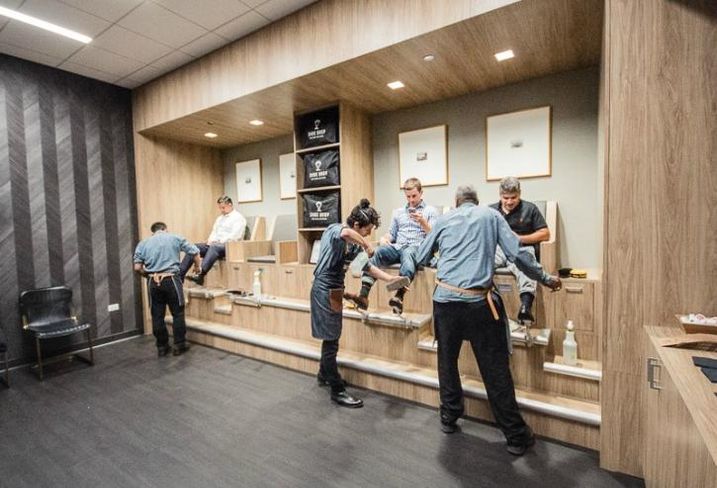 CBRE general manager Heather Holderman and manager Jacqueline Meyers have always modeled their management of 353 North Clark St on a Four Seasons-like hospitality atmosphere, and have added amenities that fit their philosophy. The latest, upscale shoe and handbag repair business Shoe Drop, was added after Heather and Jacqueline surveyed tenants about amenities they wished were in the building. A shoeshine and repair shop ranked high on the list, and Shoe Drop, a modern, technology-enabled cobbler service, fit their vision for the building and its space—a former sundry shop. Tenants seeking on-site shoeshines can sit in a lounge-like atmosphere and enjoy television on a built-in flat-screen or browse the internet on customized iPads, while top-notch cobblers that are friendly, attentive and dedicated to their craft go to work. 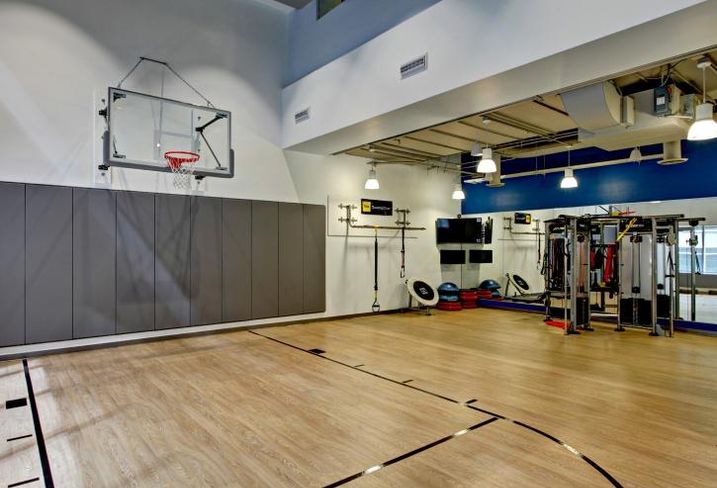 Transwestern VP Courtney Baratz says one of the highlights of the recently completed $20M renovations at 500 West Madison, owned by KBS REIT III, was the construction and addition of a 13k SF fitness center with an indoor half-court basketball court in what was previously unused mezzanine space. The idea came about by happenstance. Crews went through some drywall and discovered there was an old space for windows on the mezzanine with great height. Courtney says management immediately knew they wanted to add a unique amenity for tenants, and started planning what is now West Loop’s only half-basketball court. Courtney says the results are overwhelmingly positive. Since the renovations, Transwestern was able to bring occupancy to 98% leased and increased rent spreads in the building by 30%. 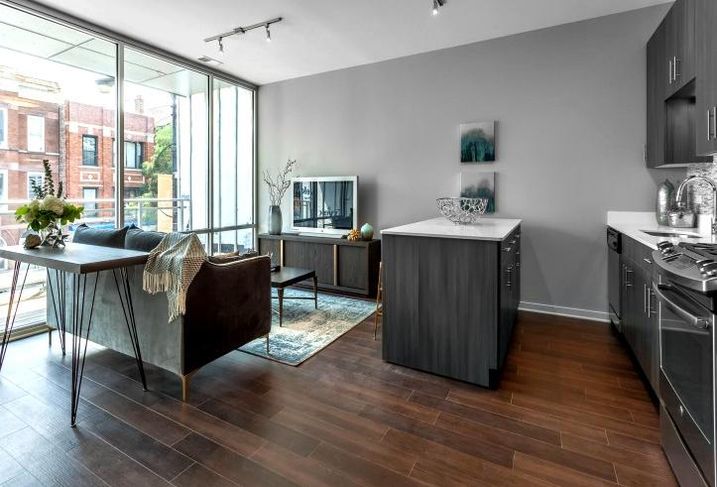 Condo-quality finishes and loaded amenities packages are common in downtown multifamily, but are a rare commodity in the outer neighborhoods. That’s starting to change as developers like Fifield Cos are building smaller projects like its Luxe on Chicago, in West Town. Luxury Living Chicago managing broker Aaron Galvin and senior project manager Mark Ziemke say the amenities Fifield is adding to Luxe’s 60 units are unseen for a building of this small scale. One amenity Luxury Living Chicago—which is handling the leasing duties at Luxe—is excited to offer renters is Doorman, an on-demand package delivery service that allows tenants to receive packages when they’re at home and ready to receive them, removing the stress of missed deliveries or stolen packages. Aaron says one of the biggest issues facing multifamily developers today is how to receive packages. Doorman allows tenants the convenience of scheduling deliveries when they’re available and reduces the labor costs of having a physical person on staff to receive packages.

6. Convenience Even In Industrial 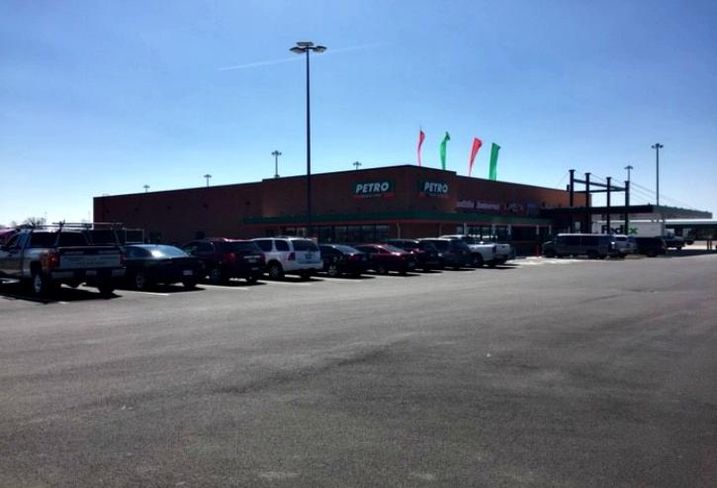 The need for new, cool amenities has made its way to the forefront of industrial real estate. Ridgeport Logistics Center, a 1,280-acre industrial park in Wilmington, IL, recently opened its Petro Travel Plaza, offering truck drivers amenities like fitness facilities, business services and multimedia entertainment, as well as on-site truck repair, service bays and a truck wash. JLL managing director Keith Stauber says that’s only scratching the surface, as RidgePort is experiencing an influx of labor from companies like Michelin, Batory Foods and Consolidated Distribution, which calls for better amenities. Elion Partners and Ridge Development are working with local officials to incorporate a state-of-the-art police and fire station on the site, and will add more food offerings, retail and a hotel.