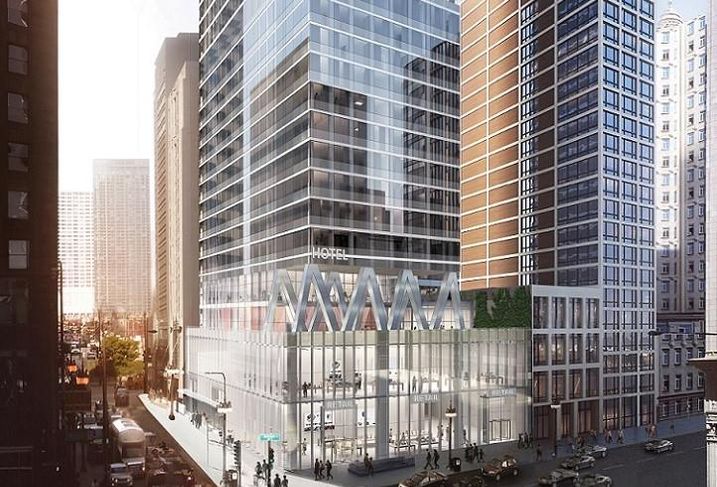 CitizenM, a Netherlands-based luxury hotel brand, recently announced its ambition to spread out across the U.S., Europe and Asia, and Chicago just became the latest city to land one of its many new projects.

The firm announced today that it would create a hotel within Sterling Bay’s mixed-use project at 300 North Michigan Ave., located between the Riverwalk and Millennium Park.

The project, developed in partnership with Magellan Development Group, will consist of a 47-story tower with 289 residential units, 25K SF of retail space and 280 hotel rooms. Its site has been underutilized for years, and demolition of the small existing structure has already begun. Sterling Bay officials hope to start construction in the next few months.

CitizenM is a company flush with cash, and its leaders seem confident American consumers will flock to its “affordable luxury” product. It provides small, but well-designed rooms with a lot of high-tech amenities, and puts a lot of emphasis on huge lobbies that guests can use like living rooms. Guests check in on tablets and costs are also kept low by eliminating concierges and room service.

Singapore-based sovereign wealth fund GIC bought a 25% stake in citizenM earlier this year, and along with shareholders KRC Capital and Dutch pension fund APG, has committed $844M to help fund its expansion.

“Chicago has always been one the most important financial, entertainment and cultural capitals in the world, but in the past few years has also become one of the country’s largest tech hubs due to its incredible talent pool,” citizenM Managing Director Ernest Lee said. “As we continue to increase our brand awareness in the U.S., it’s important to us to have a presence in this critical business market.”

“We share similar values with citizenM in that we aim to create spaces that are community-oriented, design-focused and tech-enabled,” Sterling Bay CEO Andy Gloor said.