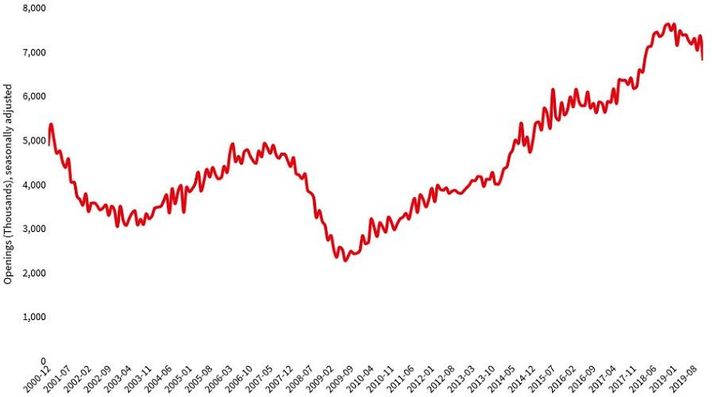 Courtesy of JLL
The monthly number of open positions in the U.S.

It’s just a small decline, and in a few months, it may prove to be a forgotten statistical blip. But with so many observers believing the U.S. is at the tail end of a long recovery, any economic clouds are often looked at as the first sign of a recession, and the recent drop in the number of open U.S. jobs caused the economists at JLL to take notice.

After peaking at about 7.5 million in March, the number of open positions declined to roughly 6.8 million in November, according to JLL Chief Economist Ryan Severino. The labor market overall remains quite robust, so a decline in open positions is no reason to panic. The same statistic stalled in much of 2015 and 2016, only to start trending upward once again, and that could still happen.

Severino said the number bears watching over the next quarter or two, when a clearer picture will emerge. If the downward trend continues, it could impact commercial real estate, but to what degree is uncertain. A continued decline in net jobs could mean slower growth and less demand for space.

“This is really a question of magnitude,” he said. “If it is just a minor pullback like we have seen, probably not much.”

Even though a lack of qualified labor plays a major role in this overall new jobs slowdown, Severino said that shortage has been a feature of the economy for years, and he is seeing something new.

“The pullback is likely a decline in demand from businesses assessing the future, not a response to the supply side,” he said. “If the pullback is significant enough, no property sector would be unscathed.”