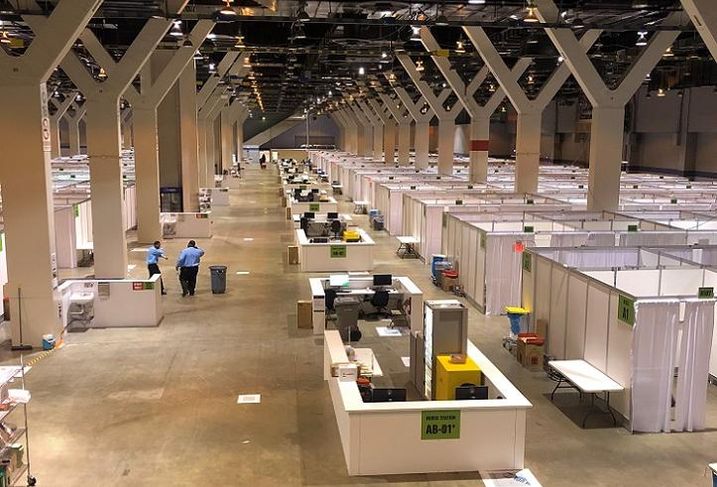 Chicago’s McCormick Place Convention Center had been set for a healthy year for conventions, but the onset of the coronavirus pandemic forced the city of Chicago to transform much of its cavernous space into a makeshift hospital.

That project hit its first milestone last week, when 14 days after securing approval to proceed, infrastructure firm AECOM completed remaking Hall C into a 500-bed facility, which began accepting its first patients last week. Company officials say the original plan was to open Hall A to patients next, but they skipped that step after it was apparent those beds were not yet needed. Instead, AECOM started getting the center’s Hall B ready, another 500-bed facility, which it plans to open to patients on April 29.

“The city and the state have acted very well on this, and fortunately that put us in the position where we are not facing the worst-case scenario, although we will be ready for it if necessary,” AECOM Managing Principal Bane Gaiser said.

The first phase completed last week is for patients with relatively mild cases of COVID-19, and helps relieve some of the burden on local hospitals, he added. Most patients there are mobile, and can get around to the restroom, as well as get their own food, and need less oversight from medical personnel.

The second phase requires more infrastructure, and will serve moderate acute-care patients. The effort is being led by the U.S. Army Corps of Engineers in partnership with Walsh Construction, Gaiser said.

Although Hall B won’t function as an intensive care unit, and patients there will not be on ventilators, they may need continuous oxygen, which required the construction of support systems that will take time to test, he added.

Los Angeles-based AECOM responds to disasters, including floods and hurricanes, all over the U.S., Gaiser said. But helping construct the McCormick healthcare facilities has been a unique experience. Typically, disaster recovery involves creating temporary services like tents and cots.

“In this instance, we were anticipating the event and getting ready for it in advance.”