Jonathan Gray's mom convinced him to come home so she could hear him speak (and pinch his cheeks). A Highland Park native, Blackstone's global head of real estate took the stage yesterday at the 2013 Kellogg Real Estate Conference. 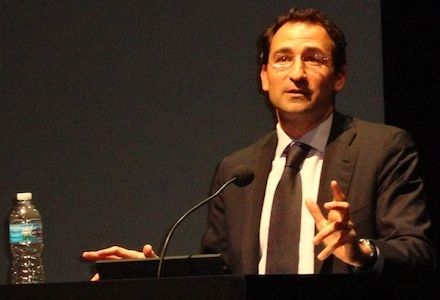 Blackstone has invested $29B in equity since the summer of '09. How has it seen net returns of 16% annually on its global funds for the past 20 years? Continuity, Jonathan, who met his wife in a romantic poetry class at UPenn, says. It's stuck to the "buy it, fix it, sell it" strategy, and favoring discounted hard assets over development has kept it out of trouble. While most hid under the covers after Lehman collapsed in September '08, Blackstone recognized opportunity in the subsequent global real estate distress, especially since "not many people could write big checks," he adds. (Monetarily big, they mean... anyone can make a giant check if they have enough cardboard.) 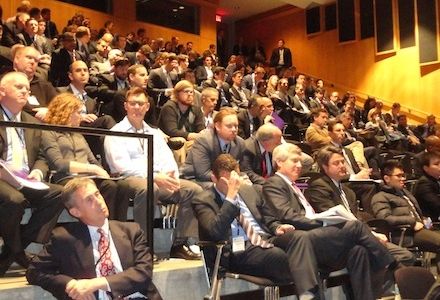 And it's paid dividends. Brixmor Property Group (formerly Centro Properties, which Blackstone rescued for $9B two years ago) recently went public, raising $825M, and the world's waiting on Hilton. While the economy is still weak, a better-than-ever supply side has helped rent growth, Jonathan says. That doesn't just apply to warehouses and shopping centers. Blackstone has become a large player in US single-family, picking up 40,000 foreclosed homes for rental nationally and around 2,500 in the Chicago area. As the population steadily grows and homebuilders have a tough time making sense of construction costs, existing assets will inevitably go back up in price (Blackstone's homes 60-plus days post-renovation are more than 90% occupied). 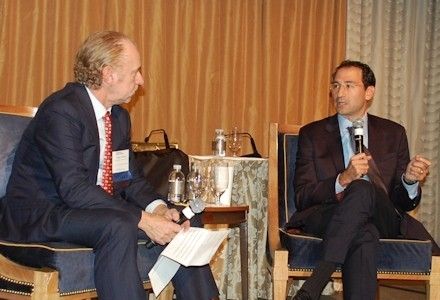 We also snapped Jonathan in NYC two weeks ago with NGKF prez Jimmy Kuhn. As the cycle moves from distress to recovery, Blackstone's focus will shift to more secondary assets like strip centers, warehouses, and suburban office, where cap rates are decent and it can borrow cheaply. Distressed continental Europe remains a big target and emerging markets like India are seeing great pricing after falling out of favor for corruption and infrastructure concerns. Jonathan's other thoughts: sovereign wealth funds are just getting started as aggressive players in global real estate; companies are migrating to the public markets; and Blackstone's not calling top of the market until it sees too many cranes and too much capital. (We hope to be hiding under the covers by then.)