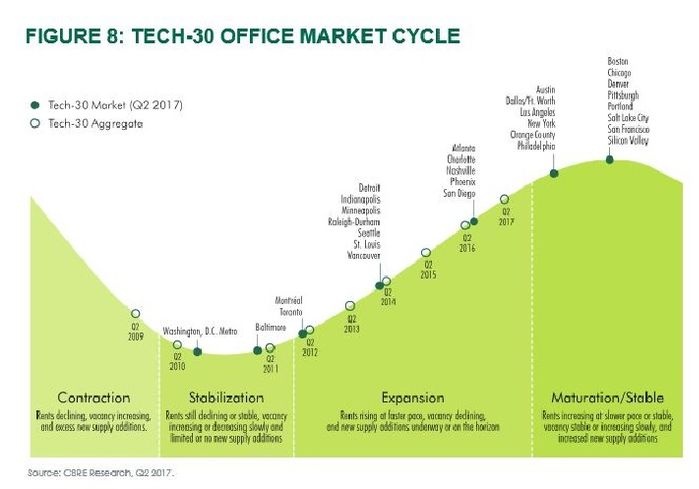 Charlotte has the potential for increased office rent, according to CBRE’s latest annual Tech-30 report. Charlotte is No. 4 in office rent growth nationally — with the tech sector fueling that increase. Suburban and city markets are benefiting as tech companies expand beyond the city limits. 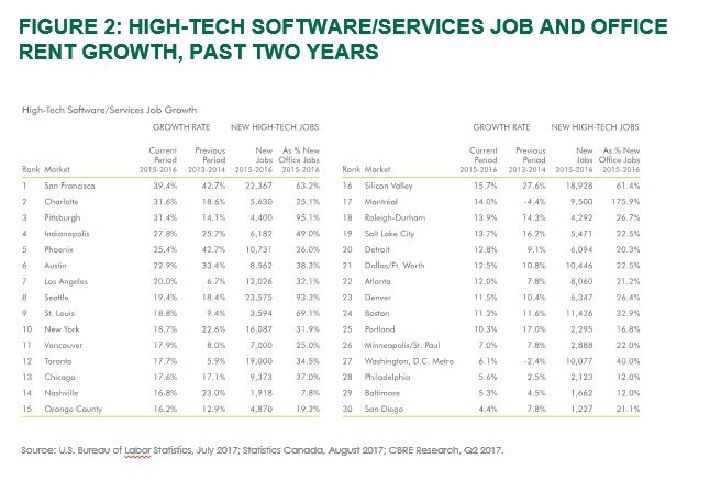 Charlotte is second to San Francisco’s No. 1 spot on the tech job growth chart. At a 31.6% increase in two years, Charlotte is building a reputation that it can provide the tech-minded pool of people needed to work at these companies.

“Living in Charlotte, findings like this are not surprising given the young workforce we have,” CBRE Senior Vice President Joe Franco said. “South End, in particular, is seeing an influx of young talent, leading to the growth in the tech industry. Owners are responding. We have been working with owners to identify the way in which office space will be receptive and cater to this industry type, with efforts such as building connectivity and speed and flexible workspace.”

Charlotte’s office rent has increased 16.9% in the past two years. Franco said public transportation is helping to drive that, especially the light rail connectivity in South End.

“We’re seeing increased office rental rates along that transportation line and among the growing talent population in the South End area,” he said. “Charlotte’s suburban markets are active as well. Owners in the suburbs are thinking about amenities in and around their buildings, with the tech worker in mind.” 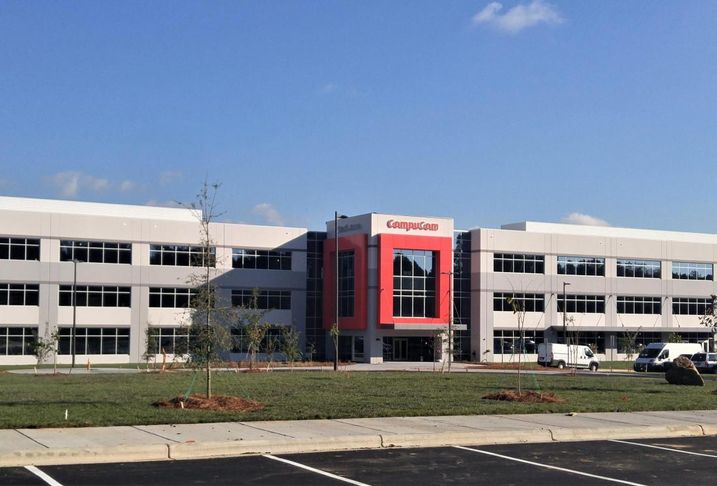 Submarkets farther from Uptown are also impacted. Lancaster County in South Carolina has been positively affected by the tech office growth.

“Over the past five to 10 years, we have been able to reinvent ourselves,” Lancaster County Director of Economic Development Jamie Gilbert said.

Red Ventures, an internet and technology marketing firm, has 2,000 employees on its Lancaster County campus.

CompuCom’s new headquarters is almost complete in Indian Land, South Carolina. Its $51M, 150K SF building will bring 1,500 new IT and tech jobs to the area.

"Lancaster County was the right choice for CompuCom," CompuCom CEO Dan Stone said. "The region is close to some important customers in the retail, financial services and healthcare industries. The Charlotte region also has a lot of technology talent trained at the university systems in the Carolinas.”