The Seaport’s original life science tenant is looking to expand across the neighborhood. 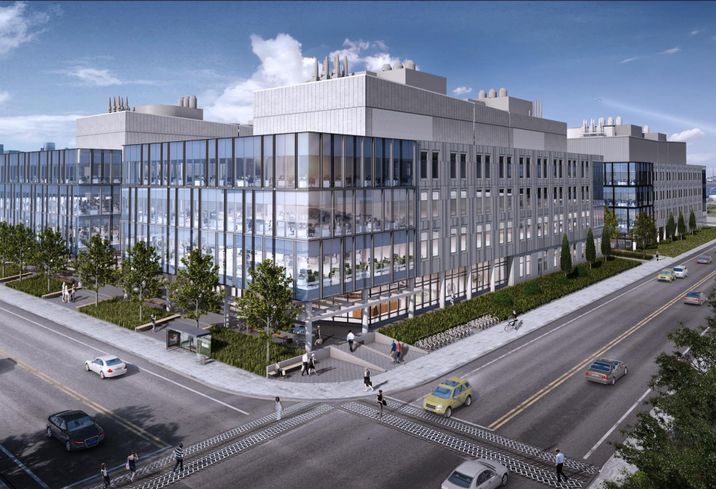 Vertex Pharmaceuticals is in advanced talks to grow its Seaport footprint by 256K SF at iSQ, also known as Innovation Square, according to multiple sources familiar with the talks and brokerage documents obtained by Bisnow.

The Related Beal-developed life science complex is on the Seaport’s eastern edge in the Raymond L. Flynn Marine Park and includes a completed 125K SF first phase, where flex lab provider SmartLabs is an anchor tenant. Vertex is in talks to take the entire, 265K SF second phase at the development, despite the company scouring the market for between 100K SF and 120K SF of lab and between 60K SF and 100K SF of office, according to multiple brokerage documents.

Vertex’s $1B move from Cambridge to its 1.1M SF Fan Pier headquarters in 2014 boosted the Seaport’s profile as Greater Boston’s newest office and life science cluster. Companies like Goodwin, PricewaterhouseCoopers, PTC, Alexion Pharmaceuticals, Reebok, Amazon and MassMutual have either moved or announced plans to move to the neighborhood in the years since.

“There was previously a trickling in to the East Seaport, but an inflection point may be the 2016 decision on the part of Reebok to relocate their headquarters from Canton to the Innovation and Design Building,” Perry Director of Intelligence Brendan Carroll said. “In very recent succession, MullenLowe and Shell have committed to presences in the area, and now Vertex may expand their Seaport footprint in an adjacent site.”

Vertex declined to comment on the negotiations, as did Innovation Square’s listing brokers at JLL. Calls to Related Beal went unanswered and CBRE, Vertex’s representative, didn't comment in time for publication.

The Innovation Square expansion — Vertex is keeping all of its space at Fan Pier — comes amid a busy year for the pharmaceutical company.

Last month, the U.S. Food and Drug Administration approved Trikafta, Vertex’s treatment for cystic fibrosis. The drug is designed for patients with a gene mutation, called F508del, found in roughly 90% of the cystic fibrosis patient population. Vertex executives indicated on a Q3 earnings call that revenue growth in 2020 will be heavily tied to Trikafta.