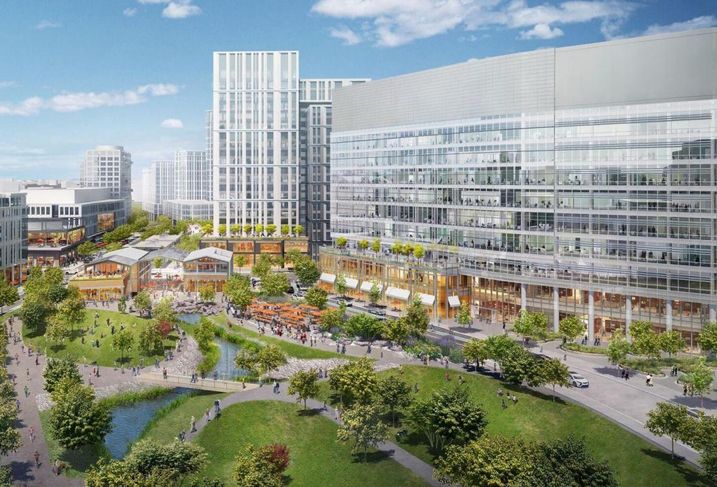 A long-awaited and much-needed East Cambridge development is moving ahead with a new name.

DivcoWest celebrated the relaunch of its 45-acre Cambridge Crossing — formerly NorthPoint — development Thursday with a mix of regional leaders excited by the prospect of more commercial space added to one of the country’s tightest life science clusters.

“We are thrilled to embark on our long-term commitment to develop a world-class community within this former rail yard — a place in which companies, researchers, startups, entrepreneurs, visionaries and Nobel laureates, can live, work, play and thrive,” DivcoWest founder and CEO Stuart Shiff said.

The groundbreaking was for 250 North St., a 430K SF lab and office building. At full build-out, Cambridge Crossing will include 2.1M SF of science and technology space.

DivcoWest expects to build an additional 2,400 residential units, in addition to the nearly 2,500 existing units in the development, and 100K SF of retail. Lab space is highly coveted in the East Cambridge submarket, where the direct vacancy rate is under 1%.

“It is important that we continue to provide places that allow our local colleges and universities to collaborate with entrepreneurs and industry leaders in solving real world issues, and in developing the next generation of companies,” Cambridge Mayor E. Denise Simmons said in a statement.

One potential way the site could evolve is with Amazon HQ2. The site has been included in Somerville’s regional bid that pitched a headquarters along the Orange and Green lines, from Boston’s North Station to Somerville’s Assembly Row.