Maybe the third time will be the charm for developer Don Chiofaro’s proposed Harbor Garage skyscraper, which he has rebranded as The Pinnacle at Central Wharf. 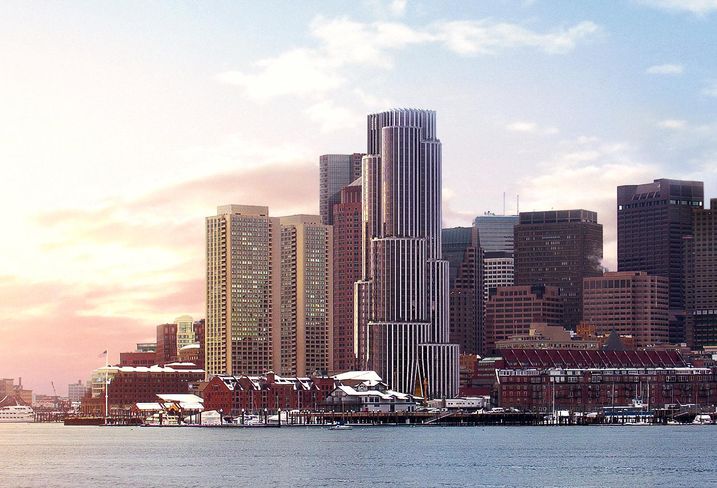 Courtesy of KPF
Rendering of the Pinnacle at Central Wharf

The Chiofaro Co. filed plans Wednesday with the Boston Planning & Development Agency for a $1B, 600-foot tower in place of the seven-story Harbor Garage near the New England Aquarium. The Kohn Pedersen Fox Associates design is the third proposal Chiofaro has publicly floated for the garage since he purchased it in 2007 for $153M.

“The Pinnacle at Central Wharf is a project driven by a desire to elevate Boston to the short list of truly extraordinary global waterfronts,” The Chiofaro Co. President and founder Don Chiofaro said in a statement. “In order to accomplish this goal, we need to deliver a project that promotes access and activity along our Harbor, honors its special location with exceptional design and recognizes and confronts the challenges of climate change.”

The 865K SF Pinnacle proposal calls for 538K SF of office, 258K SF of residential and 42K SF of publicly accessible amenity space. Half the property would feature 28K SF of new open space and improvements to the Harborwalk in place of the parking garage.

The new design calls for a stepped tower, and is a result of more than a decade of planning and input from various stakeholders, according to the development team. KPF designed setbacks in the tower as it gets higher to try to address shadow concerns and wind mitigation, as well as provide outdoor space for occupants.

At ground level, a new public plaza would complement the planned Blueway and serve as Boston’s “front door to the world,” the developer said in a statement.

“We recognize that, no matter how grand and beautifully designed, public spaces must be active in order to be successful,” The Chiofaro Co. Vice President Don Chiofaro Jr. said in a statement. “We look forward to engaging with Bostonians, through the Article 80 process and beyond, to explore how we can best animate the interior and exterior spaces at the new Central Wharf to appeal to the broadest cross-section of visitors.” 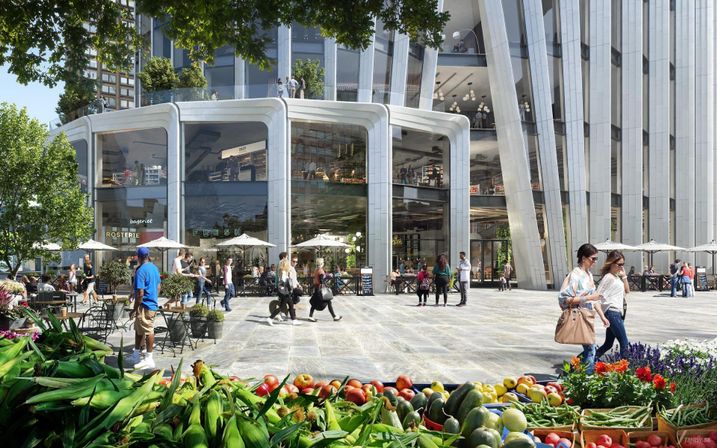 Courtesy of KPF
Rendering of public spaces at the proposed Pinnacle at Central Wharf.

While the latest proposal promotes public access, the surrounding community has been critical of Chiofaro’s previous waterfront plans.

The developer discussed building a high-rise residential project on the waterfront as early as 2006, a year before he actually acquired the Harbor Garage. Chiofaro's first proposal came in 2009: a $900M, 1.5M SF mixed-use project with two towers. The late Boston Mayor Thomas Menino swifty opposed the project.

Menino argued only “modest-sized” buildings, no more than 200 feet tall at the garage site, should be erected along the Boston waterfront and Kennedy Greenway.

“The chances of Don Chiofaro building is about as likely as an 80-degree day in January,” Menino said in 2009.

Boston may still be waiting on that 80-degree day in January, but the city did see two days this month surpass 70 degrees. A different administration at City Hall has also helped boost Chiofaro’s odds of breaking ground.

Boston Mayor Martin Walsh’s administration hasn’t voiced direct support of Chiofaro and his Harbor Garage proposal, but it has cleared the way to make it a reality.

BPDA Director Brian Golden indicated in 2014 that Chiofaro’s 2013 proposal — a 1.3M SF design with a 500-foot and 400-foot tower — was still too big for the site. But the Walsh administration worked to pass new waterfront zoning guidelines that enabled a single, 600-foot tower to be built at the garage site.

But even new zoning doesn’t guarantee smooth sailing for The Pinnacle at Central Wharf through Boston’s approvals process.

The Conservation Law Foundation and residents of the Harbor Towers condo development next to the garage have filed separate lawsuits against Chiofaro and the Massachusetts Department of Environmental Protection, accusing state officials of ignoring the modest-sized waterfront development obligation when it passed the Municipal Harbor Plan.

Both lawsuits have been cleared to progress in tandem with the planning and approvals process for the development.

“We are excited about how the design work has progressed and, over the next few months, we’ll be refining our ideas and preparing to shift from talking in the abstract about aspirations to engaging in a robust public discussion of a real design,” Chiofaro Jr. said in December.