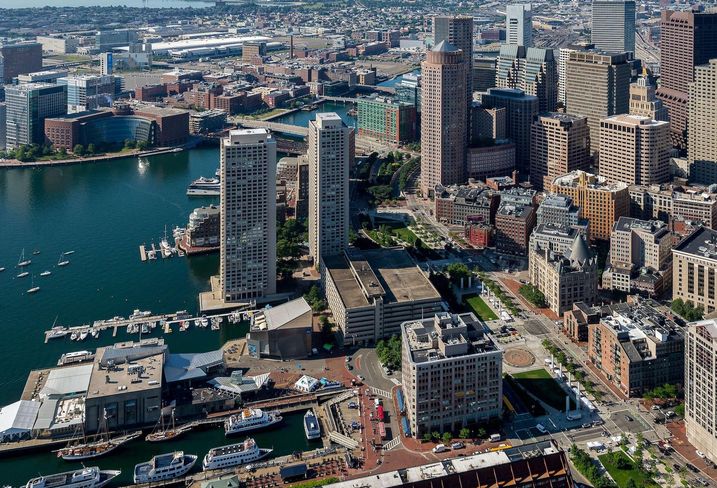 Courtesy of the Chiofaro Co.
Boston Harbor — the garage Chiofaro would redevelop into a tower is center

After years of heated talks with neighbors and the city of Boston, developer Don Chiofaro is moving forward with plans for a Boston waterfront skyscraper.

The Chiofaro Co. filed a letter of intent with the Boston Planning & Development Agency Wednesday for a $1B, 600-foot mixed-use tower. The 900K SF project could include offices, condos or a hotel over retail. No renderings or further details of the tower were made public apart from claims it would be “architecturally distinctive” and designed by Kohn Pederson Fox Associates, the New York City-based architecture firm known locally for designing EchelonSeaport.

"We have an enormous responsibility to the city after a lengthy and inclusive [Municipal Harbor Plan] process, where a wide range of contributors worked collectively to lay the groundwork for ‘Boston’s next great place.’ This project will be the catalyst for that transformation,” Chiofaro Co. President and founder Don Chiofaro said in a statement. “It's time to allow residents of — and visitors to — Boston the opportunity to enjoy the full potential of our city’s waterfront."

The tower would replace the seven-story Boston Harbor Garage and include 28K SF of public space that would link to the New England Aquarium’s planned “Blueway” along Boston Harbor.

Chiofaro has wanted to build a tower at the garage site for more than a decade, but he has had a series of spats with residents of the neighboring Harbor Towers and the late Boston Mayor Thomas Menino that blocked progress.

Harbor Towers residents and the Conservation Law Foundation have filed separate lawsuits against Chiofaro over the tower, saying Massachusetts ignored a prior obligation to keep waterfront development modest in size when it approved the MHP. The newer zoning allows Chiofaro’s tower, as well as a 300-foot tower farther down the Rose Kennedy Greenway.

Those lawsuits will move ahead in tandem with the planning and approvals process.

“We are excited about how the design work has progressed and, over the next few months, we’ll be refining our ideas and preparing to shift from talking in the abstract about aspirations to engaging in a robust public discussion of a real design,” Chiofaro Co. Vice President and Project Manager Don Chiofaro Jr. said in a statement.