First Look: Inside The $22.6M Renovation Of The Massachusetts Senate Chamber

After years of planning and a nearly $23M construction budget, the design team behind the renovated Massachusetts State House’s Senate chamber couldn’t help but feel a little anxious in early January.

It was opening day of the 2019 legislative session and time for the chamber’s carefully restored woodwork — some dating back to when the state's own John Adams was president — to endure its first test.

“The first time that gavel was hit, I kind of cringed,” CBT associate principal Christos Coios said. “It was a good, almighty whack.” 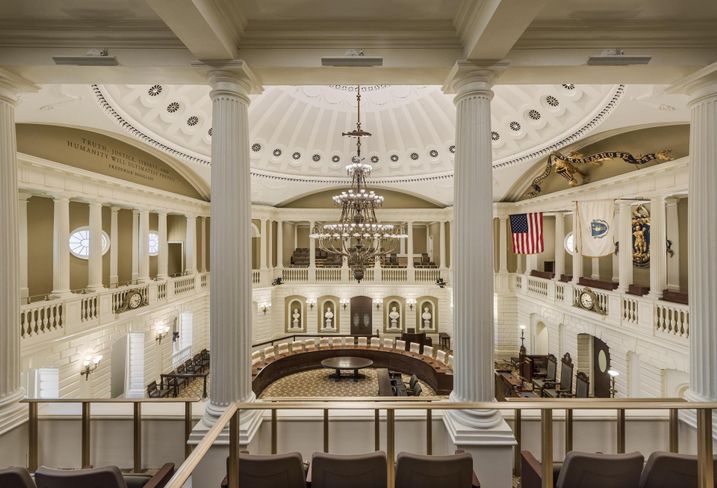 The Massachusetts State House and the Senate chamber, which was built originally for the House of Representatives, was designed by Charles Bulfinch and opened in 1798. Coios was the project architect behind renovating and modernizing the chamber over the last 18 months. He stressed to reporters Monday how important it was to keep as much of the Bulfinch-era woodwork as possible.

There have been several renovations to the facility in its centuries of existence, but the latest focused on bringing the facility back to 1898, when it became home to the Massachusetts Senate. While the finished product pays homage to the past, it also looks forward to more diversity and accessibility.

“What is so wonderful is we’ve made the chamber a more inclusive, welcoming and more diverse place — more in line with what the Senate is like, what the State House is like and what our state and country should be,” Massachusetts Senate President Karen Spilka said. 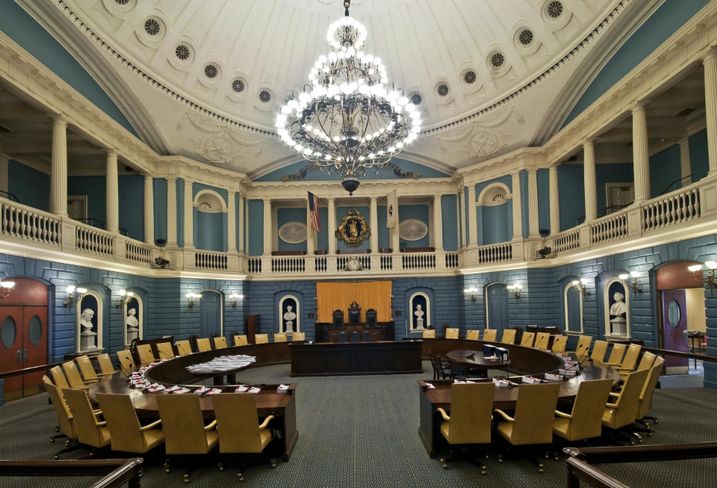 State senators will formally reopen their chamber Wednesday with a ceremony dedicated to the arrival of a bust of Frederick Douglass, believed to be the first bust of an African-American historic figure to be displayed in the State House. Senators also selected a Douglass quote — “Truth, justice, liberty, and humanity will ultimately prevail” — to be added to the chamber’s south wall.

There is an open space in the chamber left for where the Senate hopes to add a prominent woman from American history within the next year or two. 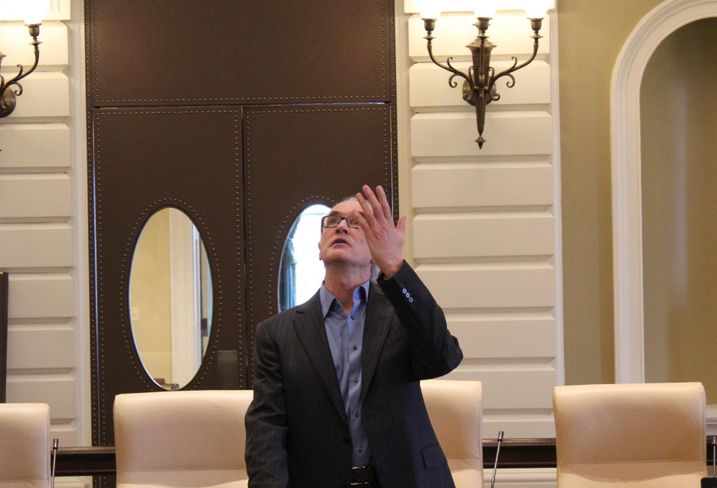 The Senate chamber of 2019 is also notably more handicap-accessible than it was when the Senate last convened there in 2017. All seats are wheelchair accessible, and a wheelchair lift was added to the rostrum where the presiding officer and Senate clerk sit. The chamber previously only had a dedicated handicap area.

The antique chandelier, including a decorative “Holy Mackerel” ornament above its many lights, was disassembled, rewired and refitted with LED lighting. The design team also replaced its antiquated hand crank with a motorized one to make raising and lowering the chandelier easier.

Acoustic materials were added to the overhead dome to improve sound quality. While restoring the dome’s plaster work, the design team also added a sprinkler system for fire safety. 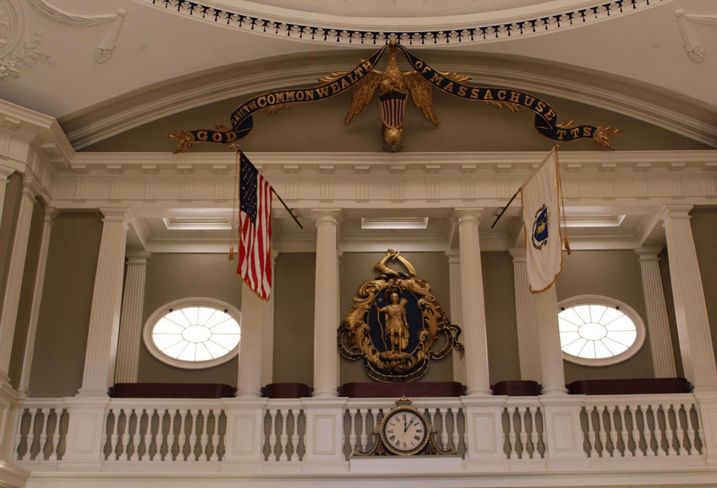 Bisnow/Cameron Sperance
The north wall of the Massachusetts Senate chamber

At ground level, the restoration team used images of the original chamber carpet to re-create the design for new carpeting. The four corners of the chamber that originally housed wooden stoves to warm the facility have been replaced with a new HVAC system. 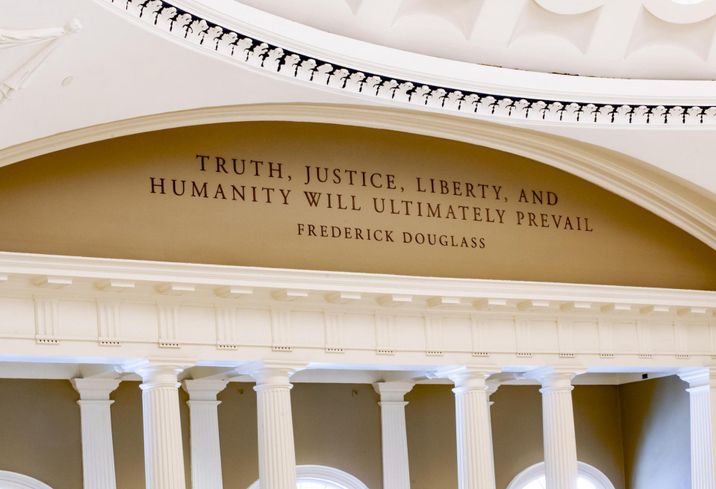 Other modern touches include new seating and USB and power ports at the Senate desks and clerk benches, but Coios highlighted how computers wouldn’t become too much of a fixture on the restored wooden desk surfaces.

“The chamber is a place of discourse and discussion,” he said.

The most painstaking part of the renovation may have taken place behind the desks.

The 1,500 wood panels on the chamber walls were removed, tagged with brass markers, and 20 layers of paint amassed over more than 200 years were steam-stripped away.

The restoration team then assessed the panels for damage and filled in any holes or cracks. The team later hand-pieced the wall back together and repainted the former blue panels to a cream color believed to be the same as what was on the walls in 1898 when the Senate moved in. 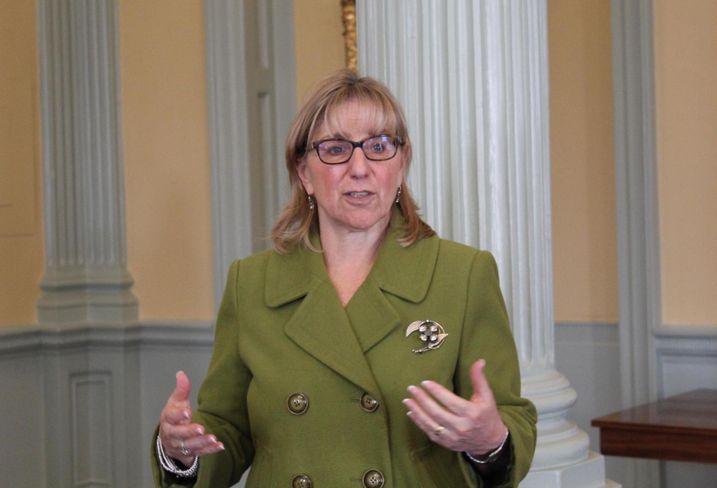 Construction may have taken slightly less than two years, but the overall research and design process took much longer, Spilka said.

“The restoration going back to making it more like the late 1800s was beautifully and painstakingly done, and it is almost an obligation that we owe to the residents of the commonwealth to keep our State House in good shape,” she said. “It is the people’s house. It is for everybody to come and feel a part of, and we want them to feel proud.”