Next Wave of Housing to Hit Seaport

John Drew is planning Phase 2 of Waterside Place, his sixth building in the Seaport District in the past 30 years. He’s confident that this hot mixed-use market will do better than ever. That's why we're excited he’s among the all-star panelists for our 4th Annual Bisnow State of the Seaport event on May 7 starting at 7:30am at the Renaissance Boston Waterfront Hotel.

When The Drew Co partnered with Fidelity to develop four buildings on and around the old Commonwealth Pier, the waterfront was a languishing, remote destination, says John (here with colleague Rie Sugihara). But their $500M investment (probably $900M at today’s prices) to build two office mid-rises and a 426-key hotel and to redevelop the pier into The World Trade Center has proven to be in the vanguard of a development wave that’s attracted investors worldwide. With demand for Trade Center offices rising, rents have increased to the $48/SF to $70/SF range, up from about $28/SF in the ‘80s when the waterfront had more parking lots than buildings, John tells us. 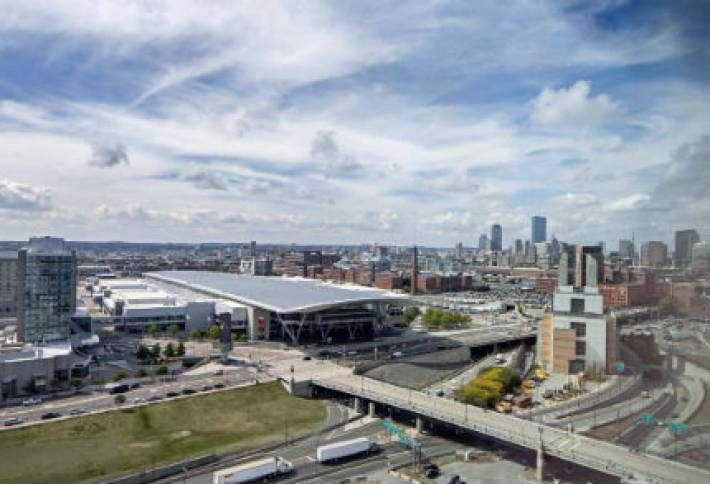 A lot’s happened in the intervening three decades. The public sector made a historic $20B investment to rebuild the transportation infrastructure and clean the harbor. The South Boston Convention & Exhibition Center (above) was built. When the economy was still staggering from the financial crisis, Cresset developed Liberty Wharf with four restaurants that are now among Boston’s top performers. The Blue Hills Bank Pavilion opened, and with the new eateries, introduced thousands of people to the area. Vertex Pharmaceuticals relocating its HQ from Cambridge—and bringing with it 2,000 employees—has been a game changer, John says. Waterside Place is emblematic of the new wave of luxury multifamily buildings going up in the Seaport District. Its rents range from $2,500/month for a one-bedroom to $7k/month for a three-bedroom penthouse or about $4.20/SF. Tenants include young professionals, empty nesters and a surprisingly strong contingent of families. For the area to hit a tipping point in its transformation into a new neighborhood, the massive amount of retail development underway will provide a big push. Next on the agenda: a supermarket and school. Now 11 buildings—soon to be 12—are under construction and John expects The Drew Co’s 236-apartment Phase 1 of Waterside Place (above with view of offices Fidelity/Drew developed), first occupied 13 months ago, to be about 94% leased by summer. Hear more about Phase 2 of Waterside Place, the rest of the growth coming to the Seaport District this year and what else the market has in store. Join us at our 4th Annual Bisnow State of the Seaport event on May 7 starting at 7:30am at the Renaissance Boston Waterfront Hotel. (Sign up here.)