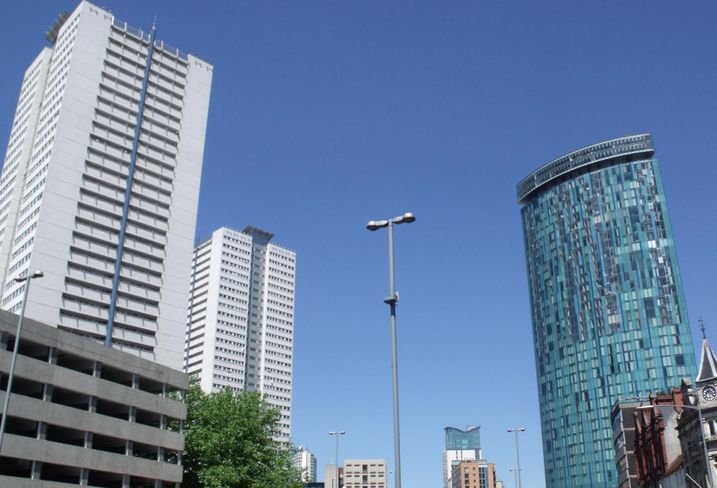 With talk of social distancing lasting into 2022, and hotel occupancy that hovers around zero, you would have to be an optimist to imagine what the world needs now is more hotels.

Yet the hotel sector, and the investors who back it, are undeterred.

Prosperity Capital has lodged plans for a 64-bed boutique hotel and 94-bed aparthotel at St James House, 17 Horse Fair, Birmingham, in plans that convert a brutalist concrete block that sits on top of music venue 02 Academy.

The design by Cartwright Pickard adds an extra four storeys to the eight-storey block. It also includes plenty of noise insulation.

The boutique hotel will be on floors three to six, with the aparthotel above.

The proposal replaces plans approved in 2018 for the building's conversion into 79 apartments, suggesting confidence in the hotel sector maybe outpaces that in city residential, as Birmingham gears up for the 2022 Commonwealth Games.

London hotels are expected to bounce back, with Knight Frank publishing research showing how the sector has recovered from half a dozen major shocks since the 9/11 bombings in New York. However, they are gloomier about regional hotels.

"The severity of the economic downturn will likely have a more lasting impact on the performance of the regional UK hotel market. Corporate budgets are likely to be squeezed, whilst the level of unemployment will dictate the disposable income available and therefore the propensity to spend on leisure-based experiences," the Knight Frank report said.

Investors are likely to take an interest, despite the obvious short-term disruption to the hotel sector.

Hotel operator PPHE agreed last week to a £180M development finance facility with Israeli lender Bank Hapoalim to fund the construction of an upscale hotel at Old Street, London, at the heart of the city’s tech district.

The 343-room hotel will cost £200M to develop and PPHE has already put in £43M of equity, some of which it will be able to unlock as a result of the development loan.

Savills reported that landlords are largely open to tenant requests for rent concessions, deferments and holidays in the hotel sector. According to press reports Travelodge did not pay its quarterly rent with StayCity seeking a rent freeze.

LandSec reported that across its hotel and leisure assets, it received 23% of its March quarter rent (five days post quarter date), roughly half the level of payment it received from its retail assets.

“From a lending perspective, the major lenders seem to be flexible with loan expiries and facility covenants. This reflects their confidence in the longer-term health of their customers. However, appetite for new debt remains limited,” the Savills report said.

Major hotel chains such as Marriott are responding by closing about 25% of their hotels, and closing floors in those hotels that remain open, in effort to maintain their cash position.