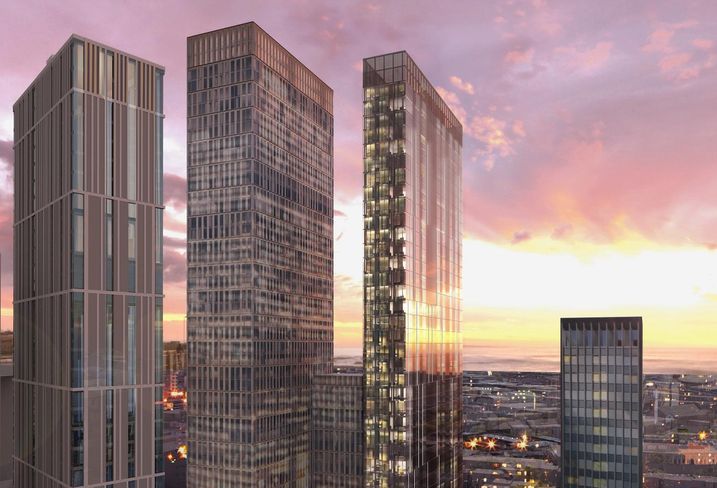 The 'super-slender' skyscraper has finally crossed the Atlantic — and its first outing is in Birmingham.

Ultra-skinny ‘pencil’ towers have been a feature of Manhattan’s Billionaire’s Row property market since the start of the century, driven by New York’s high demand, and regulations on floor area ratios and transferable development rights.

Now the logic of the super-skinny tower is being trialled in the UK at Taylor Grange Development’s 37-storey tower at 211 Broad Street, Birmingham. The building will be an aparthotel.

Claimed to be the UK’s first habitable super-slender structure, the tower designed by Glancy Nicholls Architects will be 382 feet tall and just 31 feet wide. That is a height-to-width ratio of 12:1, which is within the New York industry definition of super-slender, often said to be any tower with a ratio of height to width of 10:1.

That is nothing compared with the pencil tower claimed to be the skinniest tower in the world at 111 West 57th Street. The 1,428-foot tower is 24 times taller than it is wide and has only one residence per floor, Business Insider reported. This makes it 59 feet wide, relatively chunky compared to the Birmingham tower, but at 91 floors considerably taller.

“Advances in engineering and construction technology have allowed us to design an iconic building that will enhance Birmingham’s skyline and bring a new type of skyscraper to the city,” Glancy Nicholls Director Lisa Deering said.

“It’s great news that 211 Broad Street has been given the go-ahead and we’re very much looking forward to seeing the building take shape. This is an exciting project to be part of and a key milestone for Birmingham’s architecture.”

The tower at 211 Broad Street was praised by Birmingham City Council for its design, referencing its "ambitious concept and elegant form".

The building will be the latest in a series of skyscrapers to be delivered on Broad Street and will be located opposite The Bank, two residential towers that were also designed by Glancy Nicholls. The skinny skyscraper will be just a short walk away from Brindleyplace and the new stop on the West Midlands Metro extension.

Combining the features of a boutique hotel with those of an apartment, the city centre aparthotel will boast 264 self-contained rooms, along with a range of amenities, including a bar, a restaurant, a gym and a residents' lounge.