On the eve of last week's reveal of the Inner Harbor's latest master plan, we were visiting with the man who more than 50 years ago began the dramatic and wildly successful reinvention of the CBD and Inner Harbor into a global model of what to do with waterfront cities. Here's how. 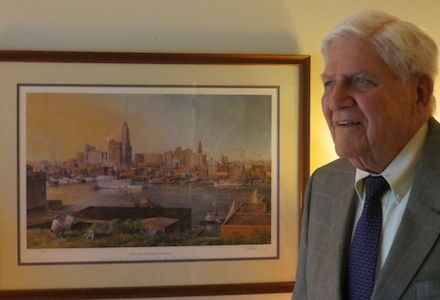 We snapped Marty Millspaugh in his home, where a painting of Baltimore Harbor in its industrial heyday hangs above the couch. After graduating from the Gilman School in Roland Park, he volunteered for the Army and was sent to Fort Dix. The friend ahead of him in line for the train to join the infantry turned out to be the last head needed, and so Marty stayed behind. (That soldier was killed among the ski troops in Italy.) Instead, Marty joined the Air Force and lived in a tent with the ground crew on the Marianas' Tinian Island, from which the atom bomb took off. He's lucky enough, he says, never to have heard a shot fired in anger. 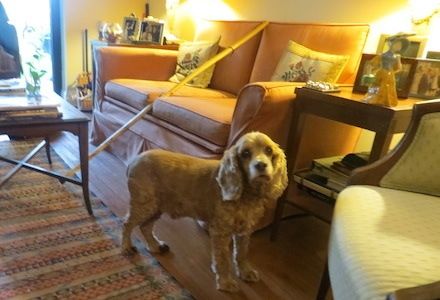 Upon his return, he went to Princeton's Woodrow Wilson School of Public & International Affairs to study social and political ideas. His thesis (by recommendation of the editor of Public Opinion Quarterly) was 10,000 words on the definition of news, for which he interviewed plenty of newspaper editors. That led to a search for reporting jobs. His first offer came from Virginia's Farmville Gazette. Instead, he joined the Richmond News Leader, narrowly missing the opportunity to cover the Farmville schools taking the lead in the revolt against Brown v. Board of Education. (Above, a picture of Marty's dog Pavlov to lighten the mood.) 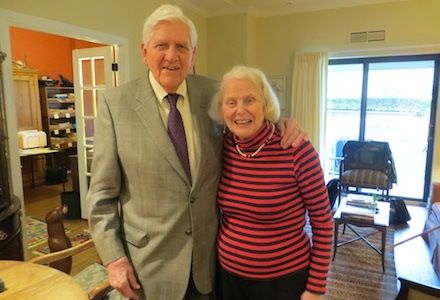 Eventually, Marty and his wife Meredith decided to return to Baltimore, where he worked at the Evening Sun, taking over the beat of famed reporter William Manchester, who like his mentor H.L. Mencken was interested in medicine. So, Marty covered the City's use of health code violations ($100 fine/day for each violation) to drive out absentee landlords. Those stories led him to cover development pioneer Jim Rouse, then chairman of Eisenhower's Housing Advisory Committee and author of its report on urban renewal, which led to the Housing Act of 1954 and the creation of HUD. All of a sudden an expert on such matters, Marty passed on an offer to be Dick Steiner's public information officer for the US Urban Renewal Administration but acquiesced to a second offer in 1957 to become its assistant commissioner, based in DC. In that position, he says, he was high enough to be involved in policy "but not high enough to be shot at." 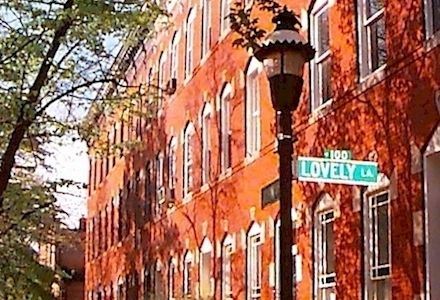 In 1960, it was time once again to return to Baltimore, where the Millspaughs lived for a short while on a Bolton Hill alley where they got the City to erect a sign labeled Lovely Lane that still stands today. But soon they moved to the old mill houses in Rockland. Marty took the job as deputy GM of the Charles Center Management Office, supervising the renewal of the mostly empty Charles Center parcels in the heart of the city. He reported to committee head Jeff Miller (former head of Hecht's), who Marty says took that famous $1/year salary so he could feel free to scream and holler to get the job done. 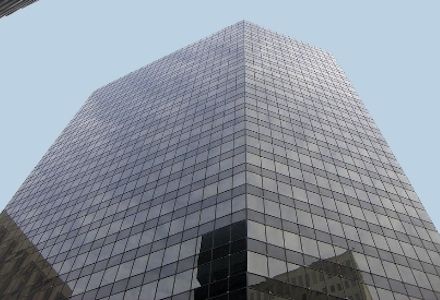 Within just three years, three buildings were done and six under construction or committed. The key, Marty says, is that his organization was a non-profit. By contract, the profits went to the City. In other words, the City was able to act like a private corporation. Pent-up demand for office and the fact that local companies were expanding also helped. In fact, the first spec building there didn't go up until Manekin built Charles Center South at 36 Charles St (above) in 1985. 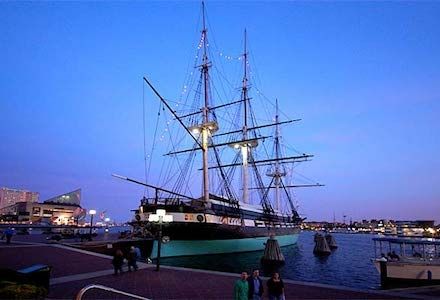 By 1963, Ted McKeldin had returned as mayor and declared the Charles Center project proof that the City could do much more, so he pushed for Marty and Jeff to concentrate next on the Inner Harbor. That's when Jeff stepped back from daily administration (though he'd stay on to help "get doors open") and handed the reigns to Marty. They formed Charles Center-Inner Harbor Management, with Marty as president and CEO. He convinced eight tall ships to dock in the Inner Harbor for the country's bicentennial, and Baltimore's ethnic groups started holding festivals there. And by 1981, Marty's org had brought in the USS Constellation (above), National Aquarium, Maryland Science Center, Convention Center, and Hyatt Regency (Downtown's first new hotel in 20 years). 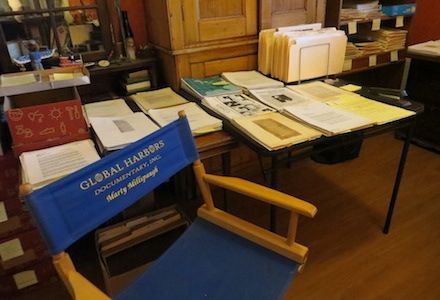 Meanwhile, Marty recruited Jim Rouse, who was finding success with Boston's Faneuil Hall, to build Harborplace. And thus the Inner Harbor completed its transformation from a deserted industrial waterfront to a $1B tourism industry. Former Deputy Mayor Andy Frank, now at Johns Hopkins, later said the 1960 to 1990 redo of those 300 acres at Charles Center and the Inner Harbor created 50,000 new jobs and $60M in new tax revenue. The work also won 50 national and international awards for design and development. Above, we snapped Marty's home office, where he's organizing the last of his archives to complete his donation to Johns Hopkins and is writing a book about the Baltimore Renaissance. 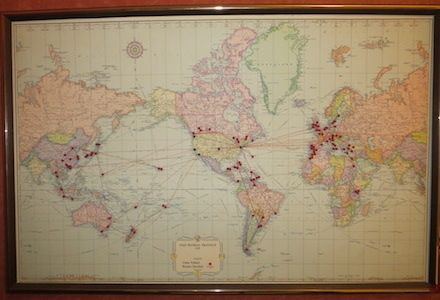 But Marty didn't stop in Baltimore. Their work there done, he and Jim hit the road with Enterprise International Development, a consultant-developer that traveled the world dispensing advice learned in Baltimore for place-making at abandoned ports. Above: a map of all the places outside the US Marty has traveled. He says the company was seriously involved in 30 cities, from Rotterdam and Sydney to Budapest and Belfast, all documented in his documentary, Global Harbors.