After 20 years of no development, cranes are spinning again in Towson, and that's churning up a tide that's getting the beached whale of a submarket moving again (good thing it's got the East Coast's most sushi restaurants per capita, so we hear). And the rest of the county's submarkets are swimming again, too. 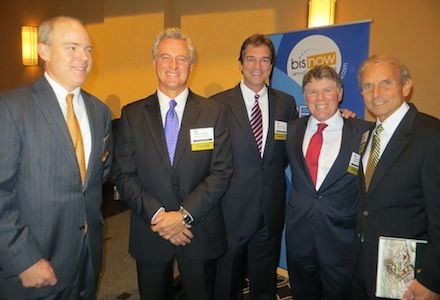 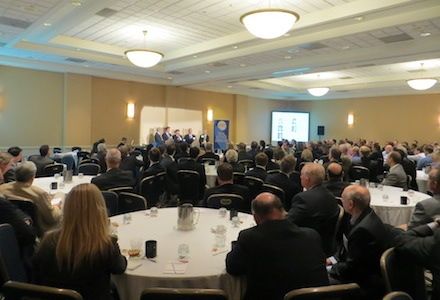 Wayne says new development in Towson is encouraging real leasing activity rather than the same-old musical chairs. (It's been fun, but we're all pretty dizzy by now.) Caves Valley's Towson Row redo, he says, is pushing its existing tenants out of the nest, and they're absorbing vacant space elsewhere in the market, including Wachovia's move to York Road and Towson Avenue. Towson City Center had been vacant for 12 years, but after a $27M investment, the 150k SF of office (the submarket's first new space in 20 years) is fully leased. Wayne also points to DMS Development's 101 York student housing, Garrison Investment's Towson Commons reinvigoration, Bozzuto's Towson Green town homes, and Chesapeake Realty Partners and Wood Partners' Winthrop apartments. 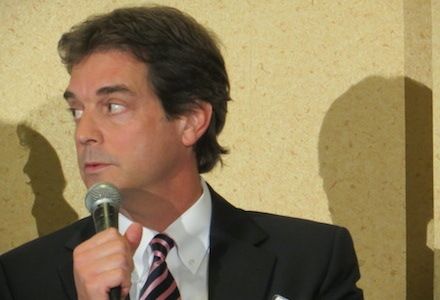 While all these projects were getting going, occupancy across Mid-Atlantic's local office portfolio rose from 81% to 96%. And Wayne says there are now 46 restaurants on three blocks, soon to rise to 55. (You'll never have to cook again, which is either a bad thing or a really good thing.) 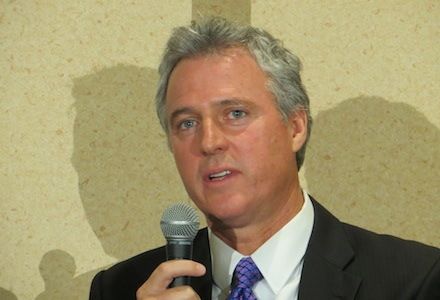 Elsewhere in the county, Brian reports that his firm and AvalonBay are adding 350 residential units at GG's 100 Hunt Valley acres, recapped last year. And the Wegmans there continues to be the best performing in the state. (They have a fruit tart that is to die for.) Plenty of residential units are rising in Owings Mills, he says, where David S. Brown Enterprises' Metro Centre is well on its way. And the development plan for Greenberg Gibbons Solo Cup redevelopment was approved two weeks ago, and while demolition looks almost done, it'll be two or three more months until the former 2M SF building's rubble is all cleared away. 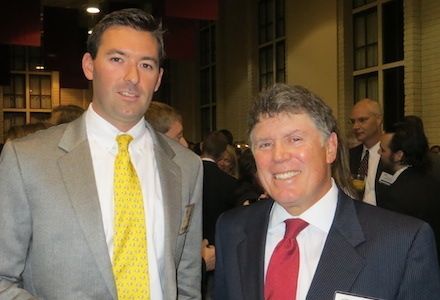 Scott (right, whom we snapped with Fulton Financial Advisors' Kevin Tehan) says office in Hunt Valley has always been like Whac-A-Mole: A tenant comes knocking, landlords find a place for it, and then tenant comes looking for space. Now, though, existing tenants are expanding, which he says owes to business services job growth. The flex/light industrial market, meanwhile is stable but exhibits no new demand. 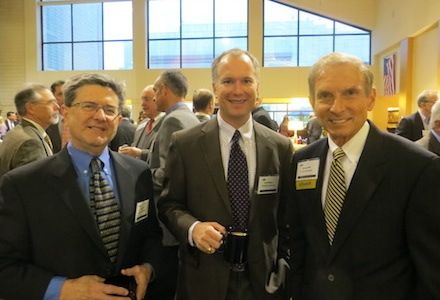 Jerry (right, with colleague Al Cunniff and MacKenzie Commercial's Joe Bradley) agrees the suburban office market is shifting into drive. He says Ed St. John presides over Thursday meetings by running through the company's development sites. And after five years, leasing head Rick Williamson has finally started giving his blessing for some development sites to move forward. Its last two sites in Owings Mills (9 and 11 Easter Court) are under construction, and it's starting 100k SF in Reisterstown. St. John also got approval from Baltimore County Executive Kevin Kamenetz for 2,000 residential units at White Marsh's Baltimore Crossroads and has just sold Elm Street Development the land to build them.

Check out more pictures from the event here.