Hours after the state demanded all bars and nightclubs shut down due to the coronavirus pandemic, Atlanta Mayor Keisha Lance Bottoms issued a stay-at-home order of all city residents and ordered the closure of all nonessential businesses. 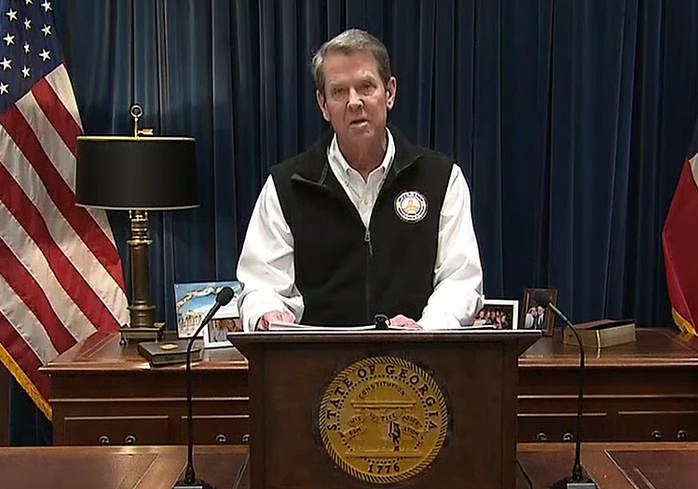 Kemp was days behind the city of Atlanta on a similar ban. Bottom's new order makes exemptions for grocery shopping, medical necessity, the Atlanta BeltLine and restaurants that serve takeout.

"Based upon our density & specific needs/concerns in Atlanta, I’ve signed a 14 day Stay at Home Order," Bottoms tweeted.

Kemp's executive order also bans all gatherings of 10 or more people unless they can maintain a minimum distance of 6 feet between them and allows authorities to shut down any gatherings or businesses that don't comply. It goes into effect at noon Tuesday and expires April 6.

"These measures are intended to ensure the health and safety of Georgians across our state, and I ask for everyone’s cooperation over the next two weeks. They will protect the medically fragile, mitigate potential exposure in public venues, and allow the state to ramp up emergency preparedness efforts as cases increase in each region," Kemp said during his Monday evening speech. “This fight is far from over. But we are in this fight together.”

As of Monday night there were 772 cases of COVID-19, the disease caused by the coronavirus, in Georgia in more than 60 counties with 25 fatalities. The U.S. has more than 43,000 cases of the coronavirus and more than 500 people have died.

The latest restrictions from Kemp and Bottoms follow similar moves in states across the country. New York, California and Maryland have all issued stay-at-home orders. But the decisions add to the pain Metro Atlanta restaurants, already reeling from a drop in business due to pandemic fears, are feeling.

“The mood is panic. At the end of the day, your restaurant business as a business is off 85-90%,” said The Shumacher Group CEO Harold Shumacher, one of the metro area's most prolific restaurant brokers. “There's a devastating falloff in sales. We're in uncharted waters.”

Georgia's restaurant industry is large, with more than 18,400 eateries throughout the state employing more than 488,000 workers, according to 2019 data from the Georgia Restaurant Association. In 2018, restaurant sales reached nearly $23B.

Kemp also said the state is working with the U.S. Army Corps of Engineers to convert arenas or large facilities into medical facilities, as well as converting vacant and underutilized properties to makeshift hospitals.

Even before the latest gathering bans, Atlanta's commercial real estate industry, including developers and contractors, was beginning to feel the brunt of the prohibitions.

“It's pretty apocalyptic for us right now. We have several projects that have been shut down. We can't work,” said Scott Moore, managing partner of general contractor Humphries & Co. “A few weeks ago, we were thinking this is just the flu. And then when the city of Atlanta shut down, it became a big deal really quickly. We're still getting RFPs, the architects are still drawing from home. But we can't bill anything.”