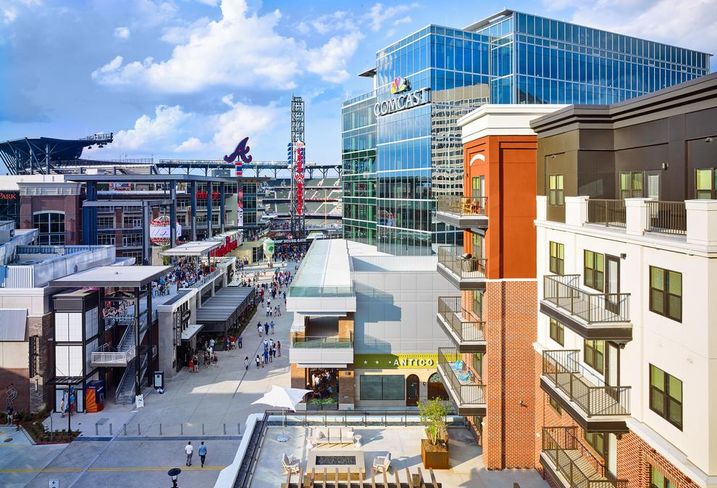 Atlanta-based Cortland Partners has paid the second-highest price in Atlanta so far this year for some of the best seats in the house for the Atlanta Braves.

The multifamily investor purchased the 531-unit Home at The Battery Atlanta from the Braves Development Co. and Pollack Shores for $156M, or $293,000 per door. Bisnow was first to report last month that Cortland was in talks to purchase the property, which is part of the greater The Battery at SunTrust Park mixed-use development, with some of the apartment units having views of SunTrust Park.

According to Colliers International Atlanta, the purchase is the second most expensive apartment trade in 2018. Ironically, Pollack Shores paid the most for an apartment project in Atlanta in 2018, shelling out $172.4M for the Avery at Northwinds in Alpharetta.

“We see [the Battery] as an unusual asset in an incredibly exciting part of Atlanta,” Cortland CEO Steven DeFrancis said. “The Braves development has kicked off an energy of revival in the submarket.”

DeFrancis said the purchase is part of Cortland's strategy that lies beyond value-add, acquiring properties that are “in iconic locations where our research suggests we'll experience outsized growth.”

So far, that has proven to be the case for apartments in the Cumberland/Galleria district, which is home to the stadium. According to a recent Marcus & Millichap report, renters and investors have been gobbling up units in and around SunTrust Park to be close to shopping and entertainment.

Average rents at Home are already among the highest in the metro area, at just over $2/SF and on par with rents being achieved in Midtown and Brookhaven.

Cortland officials also noted that more than a thousand new jobs are expected to land at The Battery when Thyssenkrupp's elevator division officially opens its North American headquarters there, complete with a 420-foot elevator testing tower.