Atlanta Has The Fastest-Growing Suburbs In The Country For Renters

Five Atlanta suburbs are among the 10 suburban cities in the U.S. with the fastest growth in renters, and on top of that list is Chamblee. 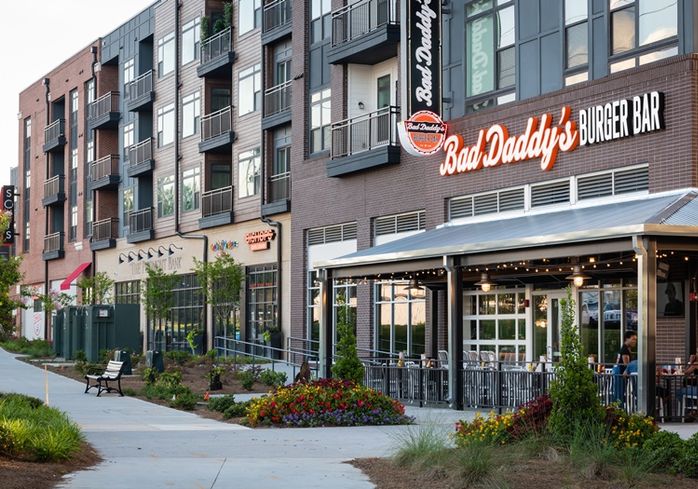 Fourteen and a half miles north of Downtown Atlanta, Chamblee's pool of renters grew by 156% between 2011 and 2016 to 19,400, according to a study conducted by RentCafé and Yardi Matrix. In Norcross, 6 miles farther north, renter population grew 148% during that period, the second-fastest in the U.S.

Other Georgia cities in the top 10 were Clarkston at No. 5, Johns Creek No. 6 and Lilburn at No. 10. Jonesboro's renter population grew 15th-fastest of all the cities tracked by Yardi and RentCafé.

“Boasting a strong local economy and high-paying jobs in the tech sector, The Peach State is home to six of the top 20 trending suburbs in the U.S., followed by Texas with five,” RentCafé officials wrote in the report. It was unclear if the report considered Peachtree Corners as part of Norcross. Peachtree Corners achieved its own cityhood in 2012, and is also experiencing a surge in new apartment development. 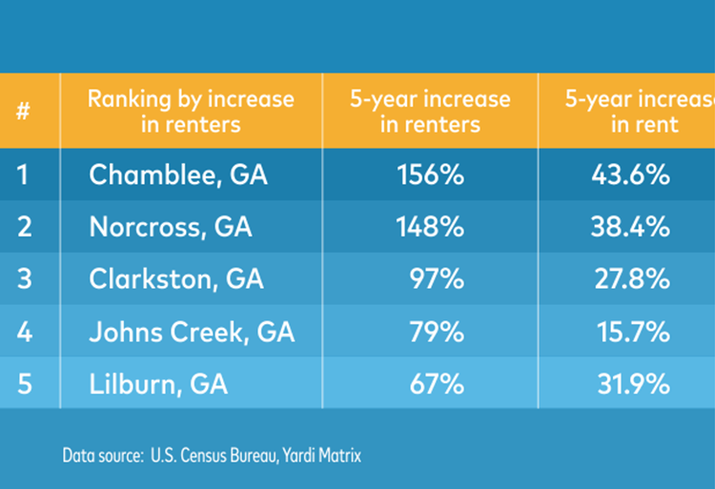 Courtesy of RentCafe
The top five Georgia suburban cities that experienced an increase in their renter populations.

Population and job growth have been central to the Atlanta story in recent years, especially population growth. The metro region is expected to overtake Philadelphia as the nation's eighth-largest population center by 2020.

The report noted that a big driver in suburban renter growth across the country is affordability: Apartments in the suburbs are generally more affordable than their urban counterparts.

Apartment rents in Atlanta rose 4.8% last year, surpassed only by Orlando, Phoenix and Las Vegas, according to a recent RealPage study. But as Bisnow reported, much of that growth was credited to healthy rent increases at suburban and mid-rise urban apartments, with high-rise apartment rents remaining flat.

The RentCafé/Yardi Matrix study certainly hewed to that narrative, showing the rental rate in Chamblee shooting up 44% over a five-year period that ended in 2016 to an average of $1,413/month. All of Atlanta's top suburban cities in the top 20 of U.S. renter growth experienced rises in rents, but all, save for Johns Creek, remained below the metro rent average.

“Affordability does play a major factor in renters' decision to head to the suburbs, along with the chance to trade crowded and noisy cities for quieter, family-friendly communities,” RentCafé officials wrote in an email to Bisnow. “The suburbs are usually associated with buying a home and settling down, but data shows that an increasing number of both owners and renters are keen on leaving city life behind and moving in suburban homes.” 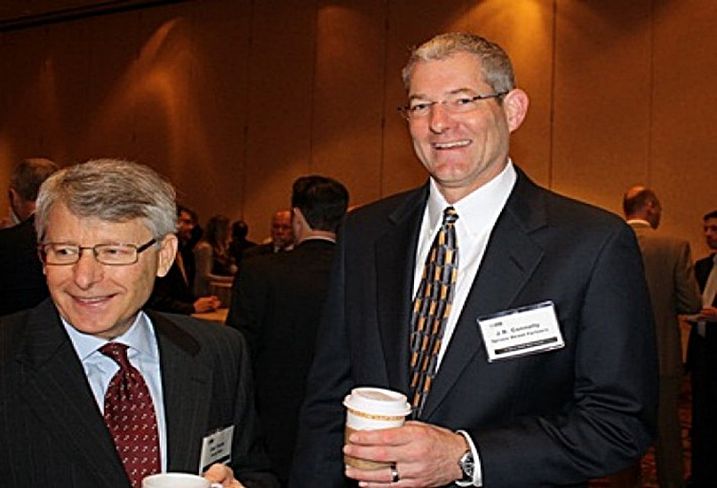 The report also found that not all suburbs were considered equal by various age groups. Forty-five percent of Chamblee's renters were 34 years old or younger, while Johns Creek pulled in the most middle-aged professionals (69% were between 35 and 59), and Lilburn, which saw a 67% jump in renters, saw those 65 and older taking the most apartments, according to RentCafé.

Connolly Investment & Development was one of the first firms into Chamblee's resurgence with Parkview on Peachtree, a mixed-use project right off Peachtree Road that includes 303 luxury apartments. The firm is underway with a second phase that is adding another 200 units, Connolly CEO J.R. Connolly said.

Chamblee leading the nation in new renters "doesn't surprise me," Connolly said. “It's just for a lot of people a really convenient place to live. There's a lot of character in the area. There's a lot to do.”