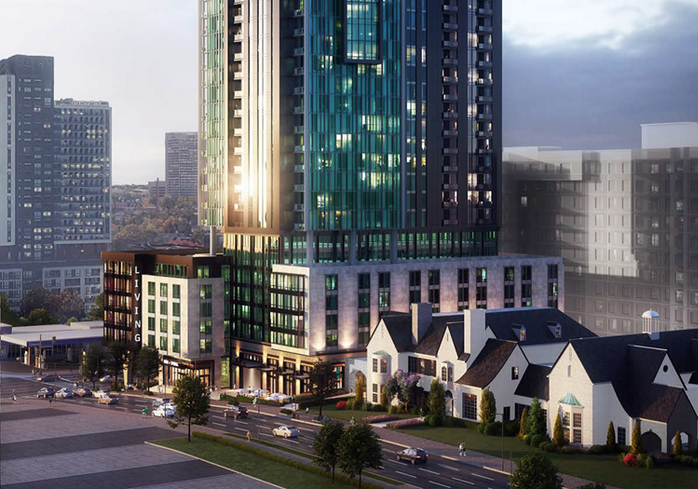 Portman's next ambitious Midtown project has the preliminary blessings from the submarket's main gatekeeper. Now the state has to weigh in.

The Midtown Development Review Committee gave a tentative green light to the redevelopment of the H.M. Patterson & Son-Spring Hill Chapel property, a project that could break ground as early as the first quarter of 2021.

Portman purchased the 4.1-acre property at 1020 Spring St. late last year and unveiled plans for a massive mixed-use development. Portman told the Midtown committee its plans include a 36-story, 375-unit apartment tower, a 34-story, 700K SF office tower and a 24-story, 350-room hotel. Those plans call for keeping the historic funeral home intact and integrating it into the project.

H.M. Patterson & Son was built in 1928 and was the site of many prominent funerals, including those for Gone With The Wind author Margaret Mitchell and former Atlanta Mayor William B. Hartsfield. In 2018, the city awarded the building a historical landmark designation, protecting it against future development. This designation includes not only the Tudor-style building, but also the front lawn and north garden.

Portman has been one of Atlanta's most active developers, especially in the hot Midtown submarket, where it developed the $375M Coda high-performance computing tower with Georgia Tech and two towers being occupied by Anthem Blue Cross/Blue Shield. 1020 Spring is slated for a 2025 completion, the developer said in its Development of Regional Impact application.

According to the Midtown Alliance, the review committee asked Portman to address issues with streetscape configuration, the number of curb cuts along Spring Street and pedestrian connection through the site. The next step is approval of Portman's application for the project as a development of regional impact with the Georgia Department of Community Affairs.