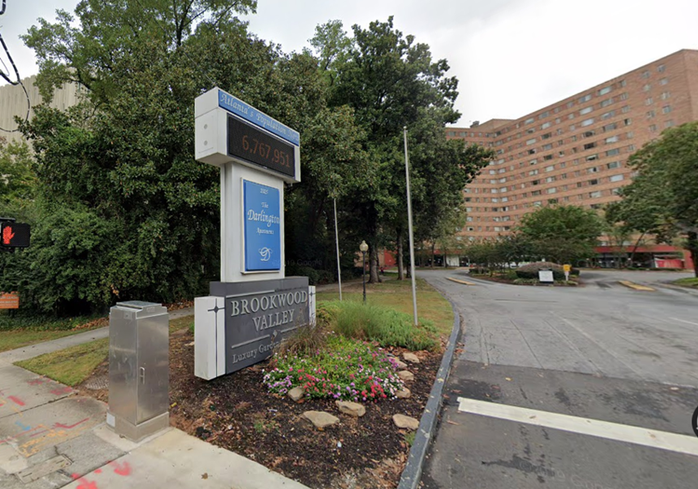 Google Maps
The famed Atlanta population sign in front of the Darlington Apartments.

Plans for a new medical office building next door to Atlanta's famous digital population sign are taking a step forward.

The developer of the Darlington Medical Center has filed permits with the city to begin land preparations for a 77K SF medical office building in Buckhead, just across the street from Piedmont Atlanta Hospital and the Shepherd Center.

"If you look at that market, there's opportunities to make sure Piedmont [Healthcare] can grow. This is one of them," said Jay Gipson, the founder of The Gipson Co. and developer of the Darlington Medical Center project.

He said the design of the five-story building will mirror that of the Piedmont Hospital expansion across the street.

The Gipson family has been in commercial development for 50 years, mainly building big-box retail in the Southeast. But after the 2008 credit crisis, the firm switched gears, focusing on urban mixed-use and medical office projects, Gipson said. The firm has developed more than 200K SF of medical office space, including Brookhaven Medical Center in 2016, which the firm sold to Caddis two years later for more than $27M.

Darlington Medical Center is set to replace part of the surface parking lot of the Darlington Apartments and will rise next to the digital "Atlanta's Population Now" sign along Peachtree Street. And Gipson said that landmark sign is not going anywhere.

"That was going to be my one condition [for the project]. That sign stays and it's going to be very prominent," he said. "That sign is historic. It's like the Varsity."

Land disturbance permits are generally filed for developers to begin the groundwork for a future vertical development. Gipson has tapped Transwestern to lease the project, which is scheduled to deliver next year.