Children's Healthcare is spearheading the next effort for a new hospital in Brookhaven in the tune of more than $1B. 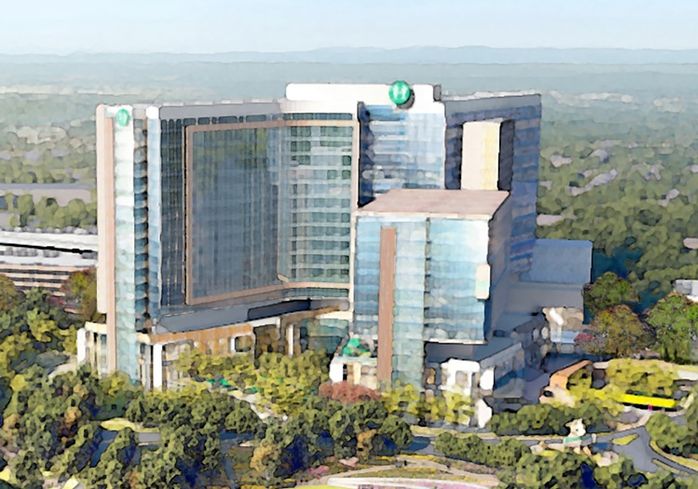 Courtesy: Children's Healthcare of Atlanta
Rendering of the planned $1.3B new Children's hospital tower in Brookhaven

Egleston Hospital, a subsidiary of Children's Healthcare of Atlanta, has filed a certificate of need with state regulators to get a green light to begin construction of a 446-bed pediatric hospital at the intersection of North Druid Hills Road and Interstate 85.

The building will be the crown jewel of Children's new Brookhaven medical campus, where the healthcare giant just completed its 260K SF outpatient center called the Center for Advanced Pediatrics.

In Georgia, healthcare providers are required to obtain approval from the Georgia Department of Community Health with a certificate of need when expanding physical medical services.

“Filing this CON is a significant milestone for developing a transformative healthcare campus that meets the needs of Georgia’s children,” Children’s Healthcare of Atlanta board of trustees Chair Jonathan Goldman said in a release. “Our rigorous planning process shows that Children’s must grow to continue to meet the vital needs of kids and their families in our state.”

The planned hospital is expected to both replace Egleston Hospital across from Emory University as well as expand its bed capacity by more than 100.

The plan comes at a time when the overall healthcare real estate market has been on a positive burst, with vacancies in Atlanta below 10% for the first time in more than a decade. And even though more than 700K SF of medical office space was under construction at the start of the year, more than 60% of it was already pre-leased.

The 1.8M SF hospital, which alone will cost $1.3B, will include an office building, a central utility plant and a clinic. It will be situated on a 70-acre campus that will include 20 acres of green space and walking trails. If approved, officials said the project should deliver within seven years.