If you ask JLL power broker Kay Younglove about the top deals of her career, she’ll point to iconic office properties: Peachtree Center, IBM Tower, Three Ravinia, Paces West, Hammond Exchange. Yet she got her first taste for big deals in a small town. 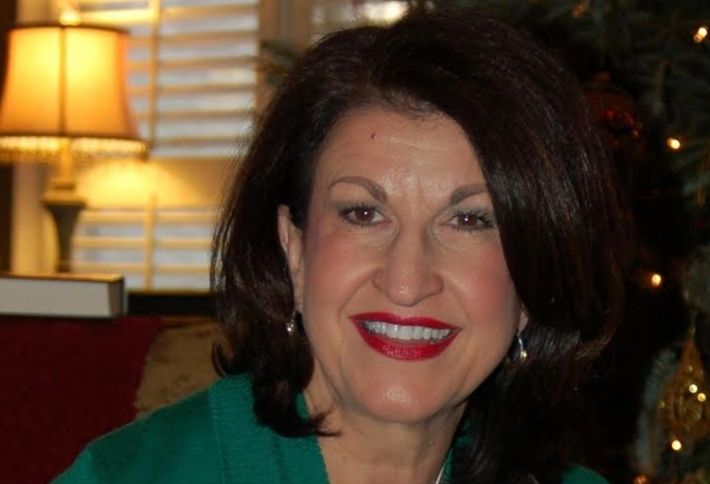 Kay’s father John Richard Kelley Jr. owned a real estate business for over 30 years with her uncle that included a real estate auction company in Waynesboro, Tenn. (2012 population: 2,437). “When I was in high school, my weekend job was helping with the auctions,” she tells us. She kept the accounting straight, writing tickets as people were buying, how much they paid, and who they were, all on a numerical stickboard (pre-computer). In a rural setting, you do it all, including buying and selling big tracts of land, Kay tells us. “If an elderly person passes away, you hold an estate auction on the weekend,” she says. “You might also be responsible for selling the bank building on the town square.” 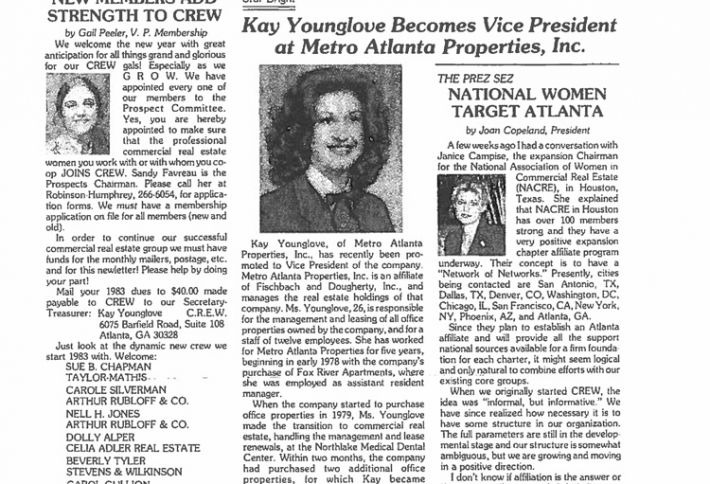 That was enough to spark her interest in marketing and sales, but Kay initially came to Atlanta “because of a guy”—her husband, Bob. After two years in the Army and graduation from Tennessee Tech), Bob took a teaching/coaching position in Cobb County and leased an apartment in Marietta. They wed in 1976 and Kay joined Bob in the big city.  She enrolled in GSU and put out the word she was looking for a job. One day, the apartment manager approached her by the pool—the leasing agent had just turned in her notice—would Kay be interested? She juggled office hours with a full school load, getting a free apartment in the deal. (Having started Tennessee Tech at 17, she would finish GSU at 20.) Her employer then went on a buying binge of office parks, closing on six in nine months, and wanted her to manage and lease them—at age 22. The owners were starting the business on the side, she recalls, signing checks at lunch, so Kay learned using the sink-or-swim method. Metro Atlanta Properties made her a VP when she was 26 (as reported in a 1983 CREW Atlanta newsletter, above). 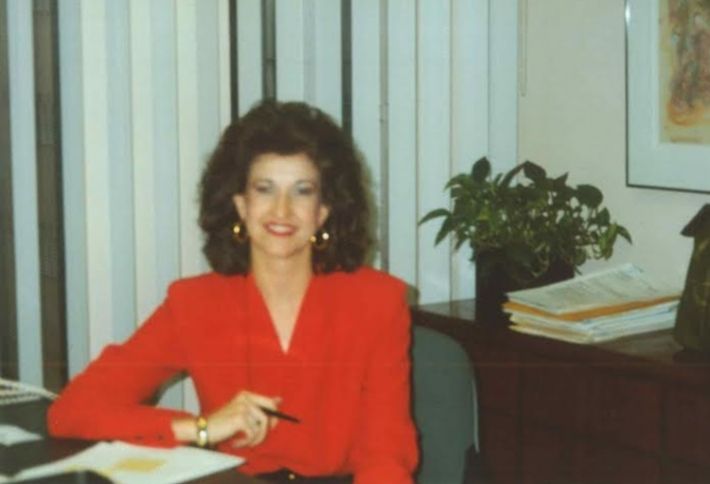 By 1984, Kay was president of CREW and pregnant with her daughter, Jessica. She was still with Metro Atlanta Properties and with a 14-month-old baby in September 1985 when a headhunter called about a job with John Portman’s company, which was building the Marriott Marquis and the Marquis One & Two office towers. Marquis Two was under construction, and they needed some leasing assistance, she says. She declined—her mother had recently passed away—saying if the job was still open in January, to give her a ring. They did, and she went to work leasing Peachtree Center for five years in the go-go ‘80s, back when brokerage parties (and hair) were huge, restaurant openings happened with celebrities like Ringo Starr, and “every other day there was a Portman story in the AJC.” By late 1990, the market had turned, and Portman had become overextended, laying off numerous people, including Kay. 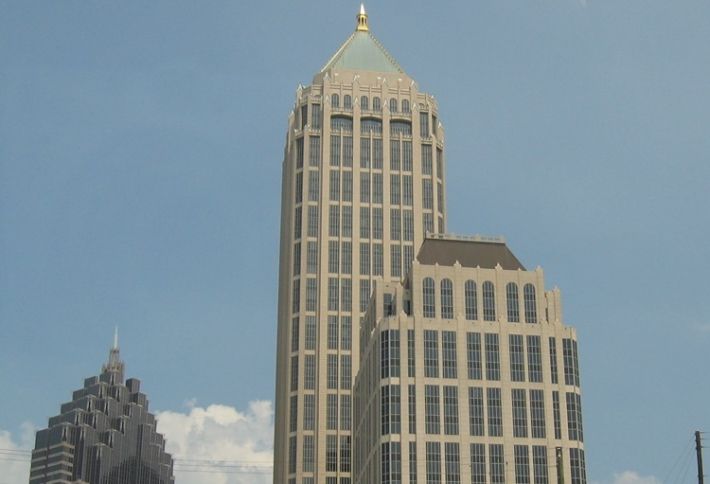 So, in a down market, as one of many applicants and the only woman interviewed, she won a job leasing One Atlantic Center (the IBM Tower) with developer Prentiss Properties. “I have such an affection for that building,” she tells us. “People came in from other cities and had no idea if it was five years old or 50 years old. It was and is such a classic asset.” Over the next 10 years, she would fill it up twice for a total of 2M SF. During her tenure, tenants like Alston & Bird grew by 10 floors. Two of her largest deals to backfill IBM’s departure in 1994—a 300k SF deal with the FDIC and in 1996 a 226k SF deal with Coca-Cola—were done directly with the tenants, with no outside brokers. 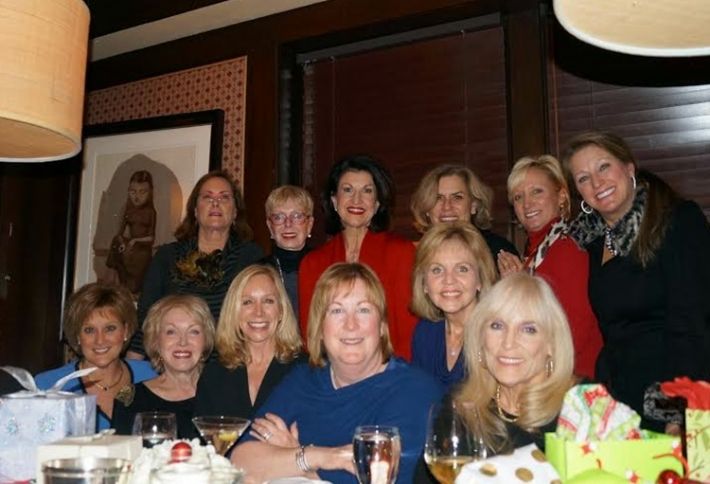 By 2002, Kay had built a reputation as someone who fills half-empty buildings. So she was a perfect fit for Koger Equity and its 49%-occupied Three Ravinia. Not only had she brought the occupancy up to 95% by 2007 (IHG with 358k SF and Eclipsys Corp with 103k SF), but in that same year of the crash, she closed 537k SF in office leases (valued at over $123M), earning her recognition from NAIOP as the top office producer in the city. Kay is also part of Atlanta's CRE power women group, whose friendships go back as much as 30 years (they have standing reservations at Bones for their quarterly get-togethers): Eastwood Real Estate Services' Lee Eastwood, SRS Real Estate Partners' Ray Uttenhove, Kay, Hartman Simons' Lori Kilberg, Taylor & Mathis' Ginger Martin, Raymond James' Lisa Boone (and seated) First American Title's Sally French Tyler, Annette Meyer Commercial Real Estate's Annette Meyer, Cassidy Turley's Lisa Dunavin, Equifax's Karen Dick, Avison Young's Char Fortune, and The Cheroff Group's Penelope Cheroff. 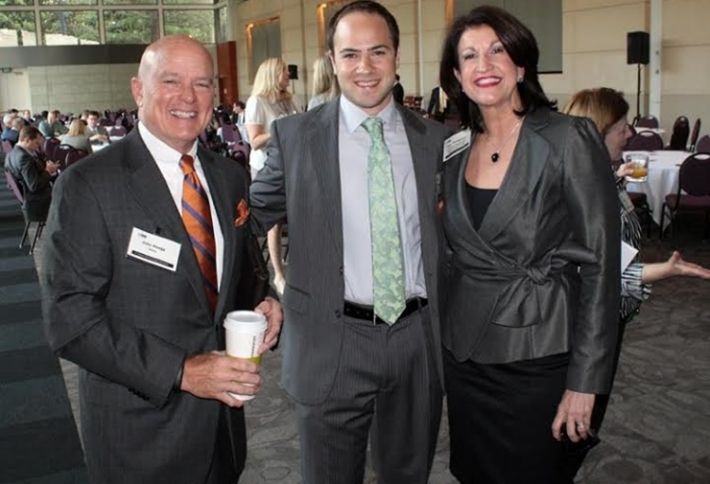 Most recently—“and the most fun doing”—Kay worked on the repositioning of the 10-story Hammond Exchange Building in Central Perimeter for client GE. Within a year, Kay tells us, the JLL team assessed the property, proposed and completed improvements, and leased the building to 100%. (Above, she’s snapped with Hines’ John Heagy at a recent Bisnow event—both are on the board of the Perimeter Community Improvement District. They're bookending Bisnow's Brian Kinslow.) In August last year, GE sold the asset to State Farm for $44M, with the value jumping from a low of $60/SF empty to over $180/SF full. Kay now leases Paces West in Vinings and The Pavilion on Powers Ferry Road and is actively looking to backfill her portfolio, as her on-going leasing success creates “opportunity to take on the next exciting new challenge.” 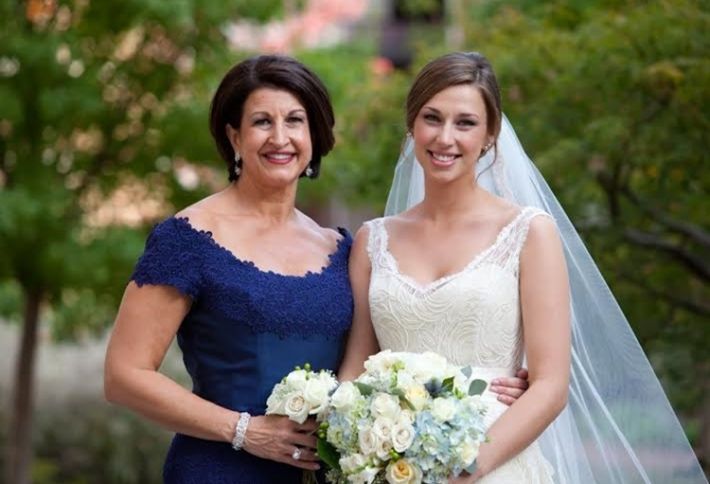 All the while, Kay has advocated for women in commercial real estate through CREW, where she’s a past president and charter member. She’s also served on the executive committee of the Board of Directors for the Atlanta Commercial Board of Realtors and works on its diversity committee. Her daughter, Jessica Younglove Childers, is now 30 years old and director of accounts for Resource Branding & Design, a studio specializing in real estate. Kay tells us she didn’t sacrifice anything by having a family, but it was still a challenge. It’s “not just a female issue” getting women into leadership positions, she says, “it’s a family issue.” (In lay terms, she explains, her husband took her daughter to as many doc appointments as she did.) 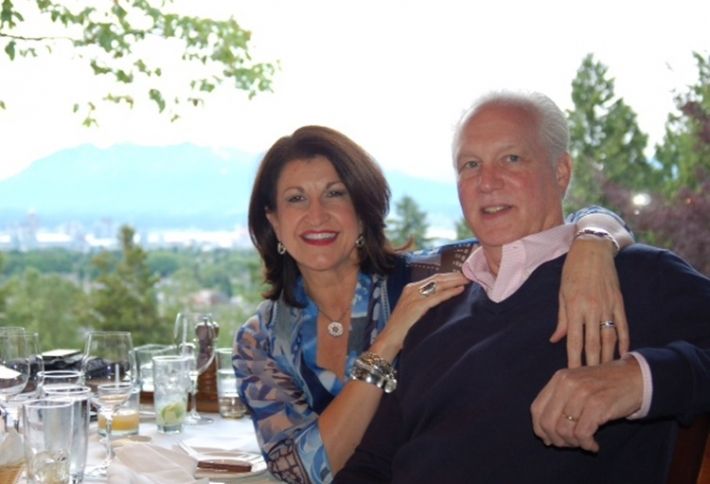 It must have been a good recipe for marriage, too—Kay and Bob recently celebrated their 38th wedding anniversary with a trip to Vancouver, Victoria, and Whistler, British Columbia, as well as the Willamette Valley of Oregon, for two days of wine tasting. Back home in Atlanta, they’re spending weekends renovating The Seed Pod, their mountain-lake retreat on Seed Lake (between Rabun and Burton).