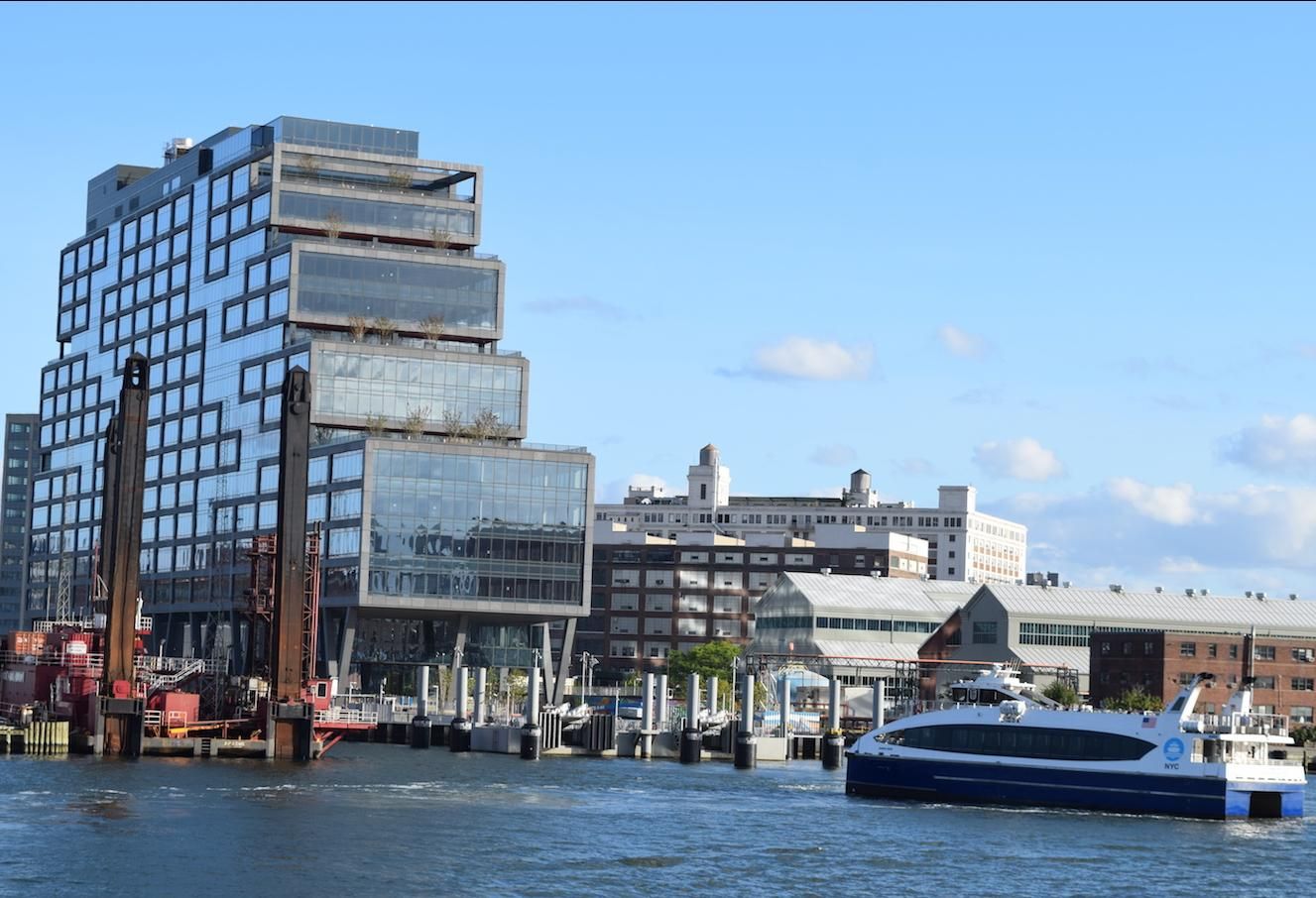 For Francis Greenburger, the CEO of development firm Time Equities, two flooded buildings in Lower Manhattan were the wake-up call.

”I never imagined these two buildings — three blocks back from the East River — that they would be vulnerable to floods at all,” Greenburger said. “It was a wake-up call … Sandy taught us and the world a lot of lessons.”

By 2050, about 37% of buildings in Lower Manhattan — home to some of the world’s most valuable commercial real estate and famous businesses — are expected to be under threat from storm surges, according to the Lower Manhattan Climate Resilience Study, released by the city last March. Property owners don’t need to stretch their imaginations too hard to think about what impact that might have. In 2012, Superstorm Sandy smashed into the city, doing $19B in damage, forcing the closure of a quarter of the Financial District’s offices and putting parts of major commercial buildings underwater.

Now multiple landlords are taking individual action to protect their assets: No one wants to see damage like that caused by Sandy repeated. Systemic action is harder to come by.

The federal government is weighing a massive sea wall as one way to protect against storms, though some critics say it doesn’t fully prepare for future sea-level rises. The city also passed an unprecedented package of laws that forces building owners to bring down their emissions or face hefty fines, which have faced pushback.

The real estate industry has a lot at stake, and the impact is twofold. Future storm events could damage businesses, and as operators of the built environment, the industry is under increasing pressure to step up and play a role in fixing the problem.

“It's in our enlightened self-interest as a building community to tackle climate change … New York is at enormous risk to sea-level rise,” Urban Green Council CEO John Mandyck said. “New York is a coastal state. It has $3 trillion of insured coastal properties. Three trillion dollars — that’s twice the GDP of Canada."

In 30 years' time nearly 40% of buildings, or approximately 875 properties, in Lower Manhattan will be under threat from storm surges, according to last year’s Lower Manhattan Coastal Resiliency report. And it is set to get worse. By 2100 that will have risen to 50% of the buildings, or 1,200 properties. About 20% of Lower Manhattan’s streets will be at risk of floods every single day, based on the projected sea-level rise of more than 6 feet. Over the last century, New York has already experienced at least a foot of sea-level rise, according to the state’s Department of Environmental Conservation. Flood maps in the city are being updated now, and are due to be released in a year. 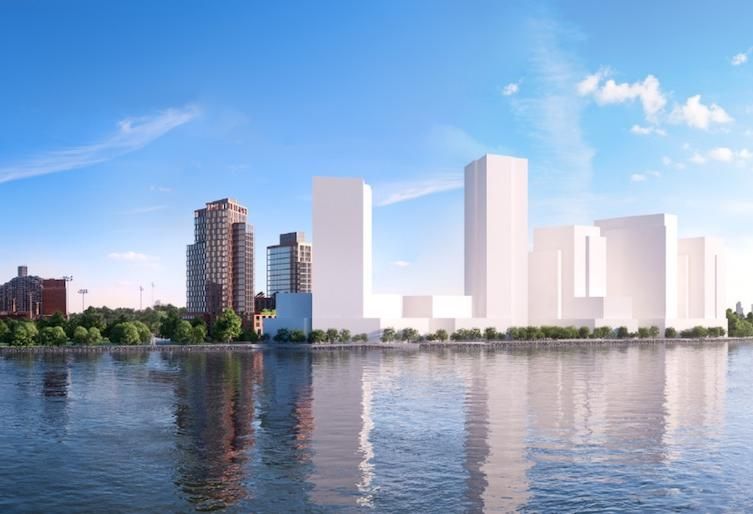 Photo: Courtesy of The Durst Organization

“Sea-level rise in our part of the United States is disproportionately higher, just based on sea floor activity, than other parts of the coast,” Mandyck said. “So we have rising waters. We have a lot of valuable real estate at risk. And the combination of the two is very unfortunate for New York.”

He said that while there is the natural assumption that waterfront properties face the greatest risk, the entire city is vulnerable if critical infrastructure like the subway, which he described as the city’s sink, were to be hit. But he points to a fairly well-informed, or at least badly burned, community of developers.

“Sandy left such a searing impact on the city that people get it. It was a very unfortunate event for the health and safety of New York City,” he said. “But on the positive side, it was a harbinger. And so people are taking notice of it and they're taking action.”

Time Equities’ Greenburger said two buildings flooded by Sandy had to be completely retrofitted, to have all the utilities moved to the upper levels of the building. But it also reshaped its approach to design. At the company’s luxury condominium at 50 West St., Sandy’s arrival during the design phase meant a new set of plans to meet new Federal Emergency Management Agency guidelines. The lobby was raised above grade and a flood gate system was installed to wrap around the building in the event of a storm, both of which Greenburger said has helped market the units.

“It is possible to create a situation where even a flood-zoned building is not overly vulnerable,” he said, though he added there is one particular property the company owns in South Florida that it may consider selling at some point because of concerns about rising sea levels.

At The Durst Organization, a century-old real estate company in the city, rising sea levels and flood threats factor into its strategy, but it continues to acquire on waterfronts. It is, however, operating under a whole new paradigm.

The company just closed on land along the Delaware River in Philadelphia that is in a flood zone, a location where it is planning a mixed-use development. Its massive mixed-used development at Halletts Point in Queens fronts directly onto New York City’s East River, and is in a flood zone. During Sandy, a building it owns in the South Street Seaport area of Lower Manhattan had 7 feet of water in the lobby. The water destroyed every single piece of the building’s mechanical and electrical equipment and made it uninhabitable for six months. That building was also completely redesigned to move all utilities from the basement.

“There are some design changes and some increase in construction costs to build higher. But if you are aware of these requirements from the beginning of the design process it is manageable,” Barowitz said, pointing to an elevated lobby at Halletts Point rental buildings.

It is a similar story for Rudin, which has built a brand-new, ground-up office building in the Brooklyn Navy Yard called Dock 72 where the first floor is a foot above the 100-year flood level. All of the mechanical equipment is on the second floor of the building and the roof, and the lower part of the building has louvers that would allow for any water to flow under the first floor. In the event of a flood, the building is designed to reopen the next day, the developer said. 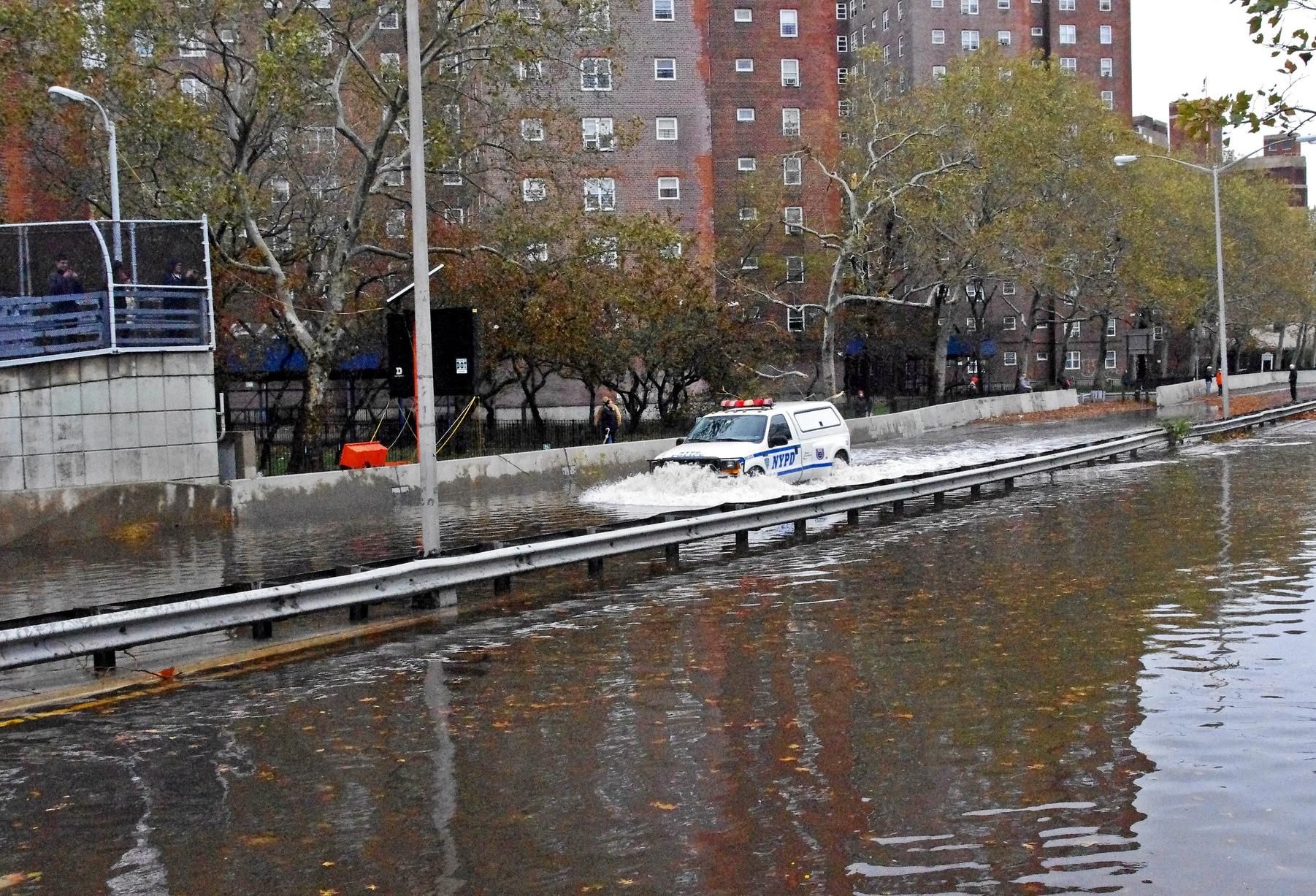 “The site is unique, I don’t know any other sites in New York that are surrounded by water on three sides, that presented a challenge and an opportunity,” Rudin Vice President of External and Government Affairs Nicholas Martin said. “We wanted to be smart and thoughtful about how the asset would perform in all conditions.”

However, while Sandy ushered in a new era of building requirements, development is still growing in areas most at risk, mainly because they have long been considered attractive places to live and work. In the years since the storm, thousands of new residential units have been built in some of the city’s worst flood zones. The need to meet consumer demand today means developers aren’t fundamentally changing their approach, said Slate Property Group co-founder David Schwartz, who owns and develops multifamily buildings in the city.

“We don't predict how people will live differently in 15 or 20 years, and we have to build and run apartments for right now,” he said. “We're going to have to figure out how to adapt as things change. But it's hard … if we build buildings far away from the water, I don't think anyone would move there.”

Some of that adaptation for building owners in the city is being forced on them. As part of an ambitious plan to reduce emissions by 40% by 2030, New York City last year introduced the Climate Mobilization Act. Within the package of bills is a new law that sets emissions caps on buildings that are 25K SF or bigger. Starting in 2024, building owners will be fined up to $268 for every ton of emission beyond an individual building’s limit. The law will impact about 60% of the city’s building stock, and could cost landlords around $20B to prepare for — and the caps will become increasingly stringent starting in 2030.

Some members of the real estate industry are less than thrilled about the new requirements. “Instead of being a stick, it should be more of a carrot; induce people to do things that are good for the environment as opposed to penalizing them for not meeting the standards that buildings can't meet,” said Marx Realty CEO Craig Deitelzweig, whose company owns 2.1M SF of office space in New York City.

Like others, his complaint is that the emissions caps don’t take into account how densely populated a building may be, which means even efficient buildings could be hit with fines. While Deitelzweig said his company’s buildings will be able to comply with caps set for 2024, he is preparing to just pay the fines as they become harsher. He said while he is working to make his buildings more efficient, he is not making any changes based on the legislation. Many in the industry are taking a similar wait-and-see approach.

“We think that climate change is a real concern and we want to do what's right for the planet,” he said. “However, the law doesn't help that goal because the law is really focused on carbon imprint as opposed to energy consumption.”

Lobby group Real Estate Board of New York has also complained about the laws, arguing that, instead of an emissions cap, it would have been more effective to require buildings to reduce energy consumption by a certain percentage.

“The idea is right, the goal is right, and reducing emissions is right," REBNY Vice President of Policy and Planning Zachary Steinberg told Bisnow last year. “The approach ultimately taken to achieve our collective and shared goals doesn’t get to the right place.”

In some cases, getting building owners to make changes voluntarily can be a tall order.

Amy Macdonald, who is the head of resilience at engineering consulting firm Thornton Tomasetti, said many preventive flood design measures are guidelines at this point as they are not enforced, and that can make it hard for owners of buildings to make big changes. That is particularly the case if they don’t intend to hold onto the asset for very long.

“If investors start pushing developers to consider [climate change] in their designs and report on it that I think will begin to change behavior,” she said. “I think ultimately the conversation needs to be turned around to not just what the risk is but what are the opportunities.”

As a result of Sandy, NYC real estate owners are more aware than most about the risks that rising sea levels will pose to the city. They are addressing the problem in the here and now, and at an individual asset and portfolio level. But when it comes to the action required to try to counter rising sea levels altogether, action is less forthcoming.