D.C.: Policymakers Try To Get Ahead Of The Wave 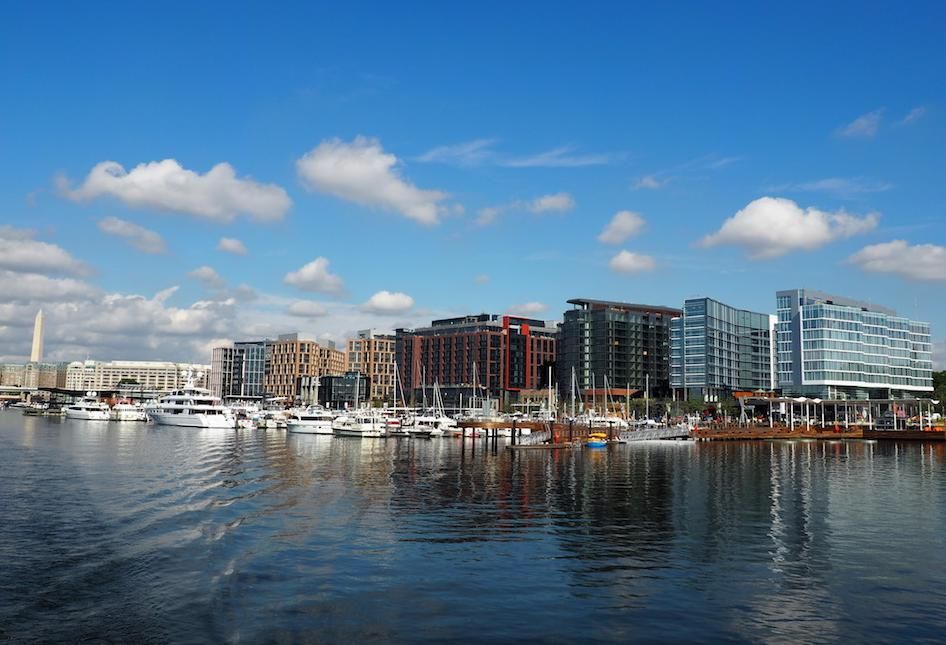 The District of Columbia, sitting at the nexus of two rivers, has experienced a surge in waterfront development over the last decade, just as rising sea levels have become a larger threat to the city’s riverfront areas.

D.C.’s local government in recent years has begun to ramp up its efforts to prepare for rising sea levels and the threat they pose to waterfront real estate by creating new commissions and leadership roles, crafting lengthy planning strategies and following national best practices on climate readiness.

“There’s not a question that we’ll change,” D.C. Office of Planning Director Andrew Trueblood said. “The city changes, and the question is how do we adapt to that change. To me, climate change and sea-level rise resilience is a critical thing to plan for.”

The nation’s capital has not experienced a natural disaster as severe as Hurricane Katrina in New Orleans or Superstorm Sandy in New York, events that led those cities to implement new measures to prepare for flood risks. But D.C. officials have witnessed the weather-related damage in other cities and taken steps to prepare before it’s too late, D.C. Department of Energy & Environment Director Tommy Wells said.

“With climate resiliency, the thing that seems to be the biggest motivator is having a disaster,” Wells said. “We have not had much of a disaster to force us to do this, so we’re providing leadership in that we’re projecting what could happen and putting in protection.”

Even without a major disaster, D.C. has seen flashes of the havoc flooding can wreak on a city. In April 2011, floodwaters rose as high as 12 feet in Georgetown and caused $20M in damages to the iconic Washington Harbor development.

Georgetown has experienced an average of more than 17 "high-water events" annually over the last nine years, and in November a new flood wall system was proposed to deal with the rising waters. Hains Point, the southern tip of East Potomac Park, has experienced a substantial increase in flooding, Wells said.

According to analysis firm Climate Central, rising sea levels mean there is a 90% chance that D.C. will experience a flood of 6 feet or more between now and 2050. That puts property valued at almost $5B at high risk, the firm estimated.

“The truth is, sea-level rise is increasing substantially,” Wells said. “We already know every high tide at Hains Point floods. When it was first built, it was not built to flood. We already have parts of the District that are now routinely flooding that did not used to flood. So we’re going to have to recalibrate.”

D.C. took a significant step toward recalibrating its flood preparation plan in 2016, when it established the Commission on Climate Change and Resiliency, a 16-member body tasked with assessing and preparing for adverse effects associated with the changing climate. In 2017, Mayor Muriel Bowser created a new position in the D.C. government, chief resilience officer, and appointed former U.S. Department of Housing and Urban Development official Kevin Bush to the post. 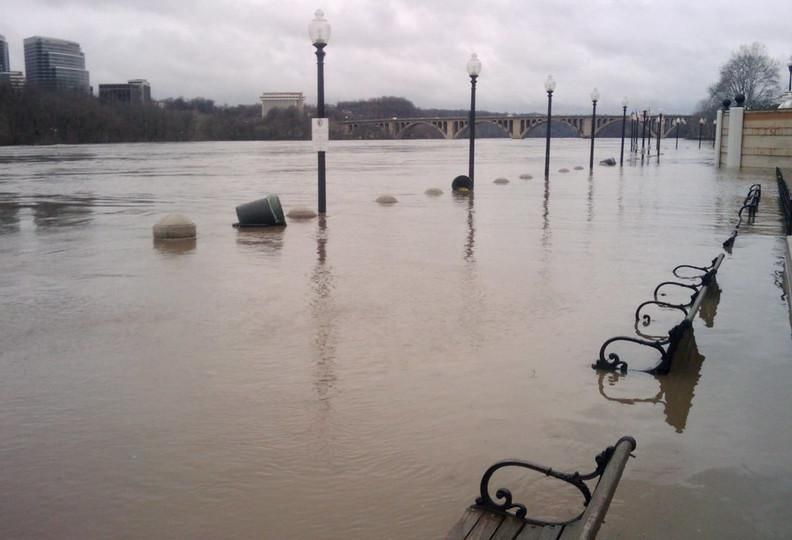 The largest waterfront development in the city’s history — The Wharf — delivered in 2017. While planning for the project’s 1.4M SF first phase began before the creation of a commission and top officer to spearhead climate resilience efforts, the riverfront project, developed by Hoffman-Madison Waterfront, was built with future sea-level rise in mind.

“The walls to the water are fairly high and they also have a large cistern underneath that Water Street road,” Wells said of The Wharf. “That is absolutely a resilient-built area that will manage high water.”

The city’s efforts to plan for climate change threats took several major steps forward last year. In April, the Bowser administration released Resilient D.C., a 160-page report outlining strategies to prepare for the adverse effects of climate change. The report calls for retrofitting all at-risk buildings or removing buildings from high-risk areas by 2050, making D.C. the first city in the U.S. to pursue such a plan, according to Bloomberg.

In October, the Commission on Climate Change and Resiliency released its first report to D.C, outlining a series of recommendations for city policies. Also in October, the Office of Planning released its proposed amendments to the Comprehensive Plan, the land-use document that guides the city’s development, and it created a new section on making the city more resilient to climate-related risks.

The latest wave of waterfront development is taking place on Buzzard Point, the peninsula where the Potomac and Anacostia rivers meet. The area in 2018 welcomed a new stadium for Major League Soccer club D.C. United, and a string of new developments have begun to move forward around the venue.

Two former Coast Guard office buildings on Buzzard Point’s waterfront are currently being redeveloped into residential, a 453-unit project from Douglas Development and a 470-unit project from the joint venture of Akridge, Orr Partners, Western Development and Redbrick LMD. Wells said DOEE worked with the developers to implement resiliency standards for the properties, parts of which sit in the 500-year flood plain. Converting the buildings to housing created more flood risk concerns as people would be living there, and the developers were not able to build units on the ground level.

“When they wanted to turn office buildings into residential buildings, that triggered flood issues,” Wells said. “No one said you can’t use those buildings, it’s just about how they’re designed, especially in relation to the first 16 feet from the floor.”

HOK Director of Sustainable Design Anica Landreneau worked with Akridge on one of the Buzzard Point apartment conversion projects. In addition to not building ground-level residences in the flood plain, she said the development team implemented flood-proofing measures for the below-grade parking and came up with resident evacuation strategies for flooding emergencies. She said the city has taken a much more proactive role in addressing flood risks in recent years. 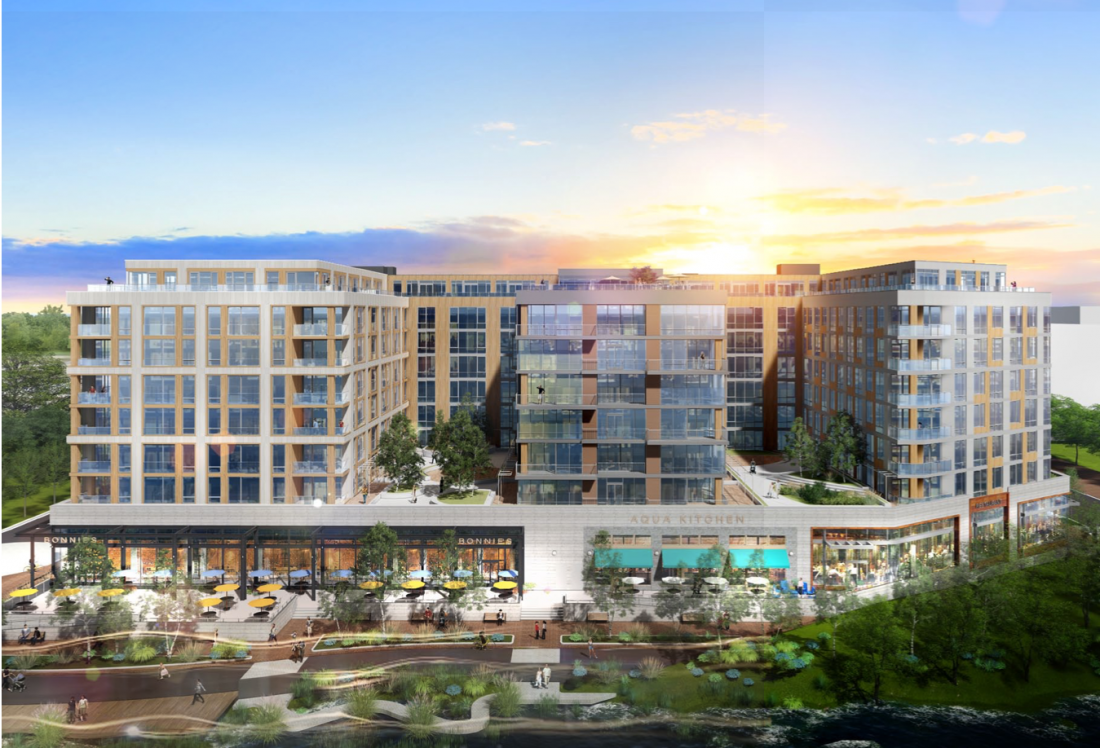 “Everything in the 500-year flood plain now has to be flood-proof, they’ve taken that into consideration for some time and it has definitely accelerated in the last few years,” Landreneau said. “As that new development is filling in and people are seeking permits, they’ve really paid attention to these sensitivities.”

Enterprise Community Partners last month launched the first update since 2015 for its Enterprise Green Communities Criteria, a set of affordable housing sustainability requirements with which D.C. and 27 states comply. Among the primary changes to the criteria were new standards around climate-related risks and making buildings more resilient to flooding.

The criteria tightened the restrictions on new development in certain high-flood-risk areas and required renovations of existing buildings in flood-prone areas to meet more stringent construction and design standards. Enterprise Senior Director of Initiatives Krista Egger, one of the authors of the criteria, said there is a growing recognition in the real estate industry that climate change will have significant impacts on communities.

“We really felt like through this criteria update we needed to address this head-on given the increase in disasters across the country and how they in many ways disproportionately impact vulnerable communities, and given the growing body of science that’s showing how our changing climate and sea-level rise does affect our day-to-day lives,” Egger said.

An expert on preparing housing development for climate risks who has studied cities nationwide, Egger said she sees New York and D.C. as two of the most forward-thinking cities on this issue.

In spite of not having been hit by the kind of disastrous weather events that New York and Florida have experienced, D.C.’s policymakers are trying to make sure that in the worst-case scenario, the city is protected.