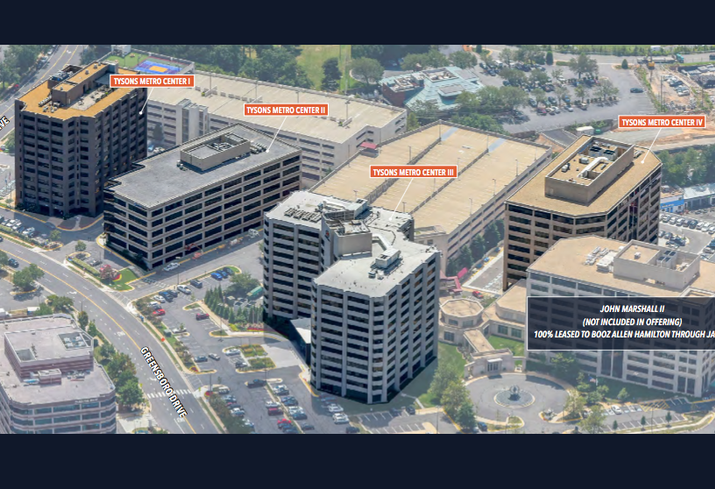 The Meridian Group is adding to its Tysons domination with the purchase of a four-building office portfolio a short walk from its 15-acre The Boro development.

Beacon retained HFF in November to market the 764k SF office park, which it recently invested $27M in for renovations. The property is 91% leased with Booz Allen Hamilton as the anchor tenant.

Meridian and Kettler broke ground in September on The Boro, a 3.5M SF mixed-use development that will include 1.3M SF of office, 1,500 residential units and 400k SF of retail including a 70k SF Whole Foods.

Given the proximity to the developer's other properties, Meridian vice president Andrew Pence said the firm has had its eye on the office park, and has been in talks with Beacon, for a number of years. He said Beacon finally felt it was the right time to sell after it completed its renovations and lease-up.

Pence said Meridian plans additional renovations to the exterior of the four buildings and some landscape improvements.

"What we’re doing with this acquisition is we’re trying to leverage what we’re doing at The Boro and put some finishing touches on this project to enhance it," Pence said. Meridian wants to "tie it into the experience office users and renters will have at The Boro and facilitate a rebranding of the projects into a cohesive destination."

The deal closes out a busy week for Beacon, which brought in Singapore Wealth Fund GIC to invest $1.05B in three of Beacons DC-area assets and bought a Fairfax office building from First Potomac Realty Trust.