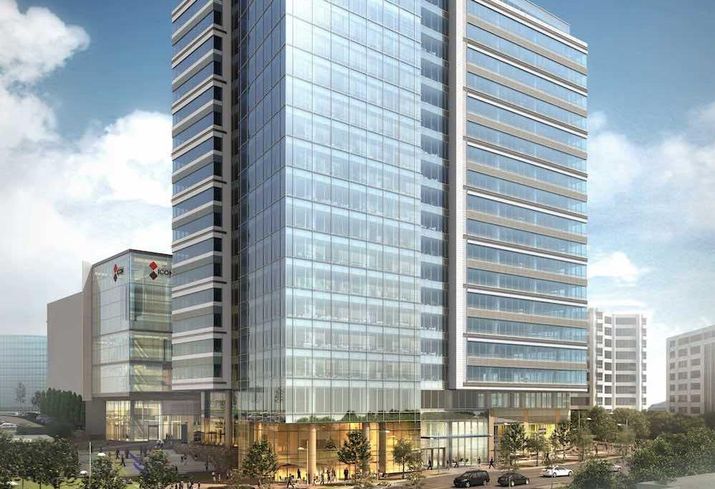 Courtesy: The Meridian Group
A rendering of the 20-story Boro Tower under construction in Tysons

The development team behind megaproject The Boro in Tysons has landed a major anchor tenant for its 20-story Boro Tower.

Accounting firm KPMG signed a lease that could span seven floors at Boro Tower, relocating from nearby 1676 International Drive in Tysons, developers The Meridian Group and Rockefeller Group announced Wednesday.

The lease gives KPMG up to 168K SF, a Meridian spokesperson said. The 437K SF office tower now has 178K SF remaining available ahead of its 2019 delivery, making it over 60% pre-leased. The development team signed law firm Hogan Lovells for 44,500 SF last year and media company Tegna for 46K SF in 2016.

The Meridian Group is the primary developer behind The Boro, a 4.2M SF mixed-use development on a 15-acre site next to the Greensboro Metro station in Tysons. The development team has also signed retail anchors Whole Foods and a 15-screen theater, now being billed as a Kerasotes Showplace Theatre, plus several restaurants and service retailers. In August, Meridian partnered with New York-based Rockefeller Group for the Boro Tower component of the development.

“We are very pleased with the strong response to Boro Tower,” Rockefeller Senior Vice President Hilary Allard Goldfarb said in a release. “Forward-thinking companies today are embracing new construction for all the workplace advantages it can deliver."

“With nearly 2,000 employees across Fairfax County, KPMG is an invaluable contributor to the regional economy, and we are honored that a corporate services provider of this caliber has chosen to grow in Virginia,” Northam said in a release. “This major expansion reinforces the company’s commitment to the Commonwealth and to Northern Virginia’s dependable talent pipeline."