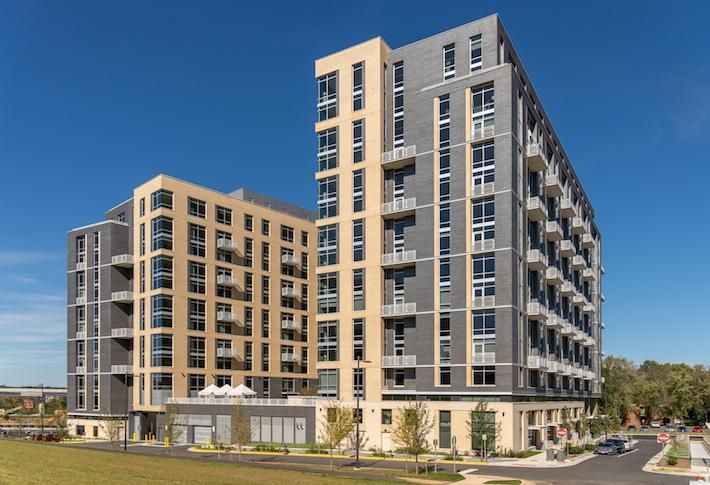 Six years after receiving approval for a seven-building development near the McLean Metro station in Tysons, LCOR has welcomed residents into the first building.

The developer recently celebrated the grand opening of Kingston at McLean Crossing, a $122M multifamily development with 319 units.

The building at 7480 Birdwood Ave. sits near the interchange of Route 123 and the Dulles Toll Road, about a half-mile from the McLean Metro station. It is also less than a half-mile from a Safeway-anchored shopping center. Several office buildings occupied by Mitre, Northrup Grumman and Capital One are also close by.

The Kingston apartments are currently 44% leased, according to LCOR. The building consists primarily of one- and- two-bedroom units with a handful of three-bedrooms. Its amenities include a business center, a library, a fitness center, a children's play area, a pool deck and a rooftop courtyard with grills. The east and west towers of the building are connected with a sky bridge with lounge seating and a piano.

"We're ecstatic with how residents and prospective tenants are receiving Kingston so far, and we're confident that will continue," LCOR Regional Property Manager Peter Pollak said in a release.

The project is part of a 20-acre site on which LCOR received approval in 2012 to build seven buildings with 2,571 units and 50K SF of retail. LCOR is evaluating potential revisions to the approved master plan as it considers its next phases, a spokesperson said. The development, previously called The Commons at McLean, has been rebranded as McLean Crossing.

Also near the McLean Metro station, Cityline Partners is moving forward with its planned 8M SF Scotts Run development, including a roughly even mix of office and residential space. Capital One last year finished construction on its new McLean headquarters, now the tallest building in the D.C. region, and is developing additional phases, including a Wegmans grocery store and a performing arts center.