Baker Tilly partner Brad Nicklin has extensive asset acquisition experience, serving as the team lead for both the DC office and East region real estate practices. As we searched the galaxy for a willing subject to bombard with every burning financing vehicle-oriented question we could think of, we honed in on him. This exhaustive interview proves the force is strong with this one. May the funds be with you. 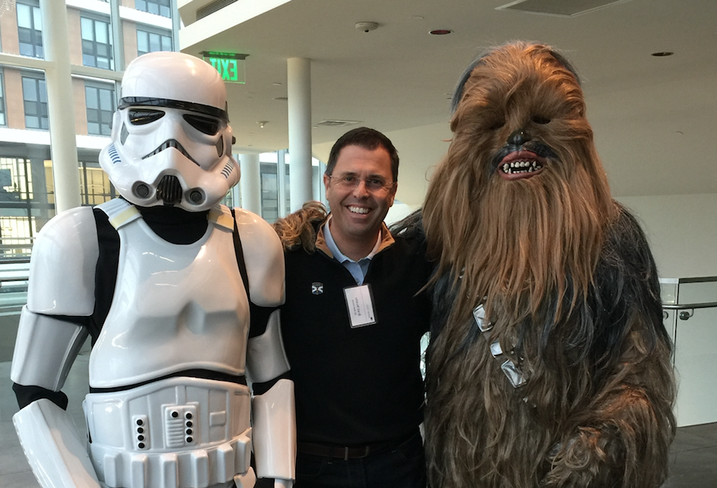 Bisnow: What are some new trends in the equity/debt stack you see?

Brad: We serve clients in many different markets across the US. What we are seeing is a resurgence of quality deals in the more favorable markets. I believe, however, bankers are being a bit more discriminating in the type of projects and the partners involved. The partnerships that have large amounts of funds to deploy are more easily able to execute than the thinly capitalized ones.

In the DC area, the finance community seems to be even more conservative and has significantly dialed back the aggression. This manifests as higher pricing, stricter covenants and controls, and less willingness to push leverage ratios. Lenders are focusing on the supply side and completion issues. New apartments, for example, are harder to get financed at this point.

We are finding that banks are looking at their portfolios and challenging mix and exposure. Condo projects are a challenge to push through as well, with teams having to pre-sell a majority before securing financing. We are also seeing greater discipline applied consistently across the board.

Finally, there is a renewed interest in tax credits and incentives—like New Markets Tax Credits—when they can be obtained. Still, transactions that can move forward without any subsidy are typically not willing to endure the hassle and holdup these credits entail.

Bisnow: Sounds like you're optimistic and market conditions are improving due to more rigorous controls on lending practices. Are developers still using mezzanine debt? Is this in the form of preferred stock or mortgages with higher interest rates than the first mortgage? Do you see much convertible debt?

Brad: We’re not seeing much in the way of convertible debt. Use of true mezzanine debt is fairly limited, but it is used when developers want to maintain 100% ownership and control over the long term.

Use of EB-5 as mezzanine debt is fairly prevalent in “gateway cities,” as it is more affordable when compared to traditional mezzanine debt, but there is a hassle and timing factor to consider. A source of bridge financing is generally needed if using EB-5. So, it’s not very common, and banks are willing to evaluate yet hesitant to execute. Banks are trending towards only committing if they have a high degree of confidence in the mezzanine partner.

Bisnow: And that requisite confidence was likely significantly eroded by the subprime mortgage crisis. As people look for other financing options, crowdfunding is a hot topic. With the JOBS Act passed, many feel it democratizes investment opportunity. Are developers engaging with crowdfunding platforms?

Brad: I think crowdfunding platforms have been in the exploration phase for the last three to five years. It’s receiving a lot of media attention but represents less than a fraction of a percent, volume-wise. Some developers are probably skeptical of this approach, as they do not have an established track record with it.

My prediction is that we will continue to see crowdfunding gain traction. Many of these deals will be small initially and pass under the radar in the construction and real estate ecosystem. To answer your question—it’s out there, but not that prevalent. It’s a nascent development that may be overhyped.

I do believe these platforms have the ability to change how capital is raised and allocated, as well as how investment fees are impacted. This allows for a much broader investor base access to investment opportunities they would historically never obtain due to failure to hit critical mass. Historically, when you are able to empower a broader investor base, it will allow for greater capital to be deployed and thus stimulate new development.

The institutional investor’s barriers to entry have held steady. Eventually, the fees charged on the two might converge and start to have some parity. We will need to observe how the eREITs perform over a longer period of time to evaluate if their model will be a successful investment platform. Results drive future behavior, so we will have to wait and observe.

Bisnow: Necessity is the mother of invention (or maybe in the case of eREITs, adoption). Do you find that lending institutions are more discriminating when allocating capital after the Great Recession?

Brad: They have eased credit but not to the point where it was pre-2007. Still, we are not really seeing a lot of deals sitting idle due to lack of financing. In fact, we see competition for deals. I think lenders are a bit nervous this current expansion trend is unsustainable. Eventually, we will have another recession—it is just a matter of what degree.

From my perspective, banks are maintaining discipline on leverage this time around. We are not seeing 100% levered deals anymore. Rarely are banks pushing out of the normal bounds of leverage; we’re seeing 65% to 75% depending on the type of project. I think each market is going to be unique, but the DC market is certainly one where we see cautious lending activity.

Bisnow: Is there a particular asset class that is very attractive right now, seeing a tremendous influx of investor money?

Brad: Investors seem to be seeking multifamily—it is a great asset class, especially in a downturn, but there is speculation that the current run may end.

I think people are avoiding market-sensitive sectors like hotels, retail and office. It seems the rotation is heading toward sectors more dependent on lifestyle and thus less volatile. This would point toward assisted living, storage, healthcare, medical office, industrial and warehouses.

In DC, we have seen an uptick in interest in medical office buildings and specialty real estate. I believe investors view some of these asset classes as hedges. With Baby Boomers, there is a need for a great numbers of clinics, assisted and independent living, and patient care facilities.

All these asset classes go through cycles of popularity. Office is on a downturn in the DC area. The General Service Administration (GSA) slowdown has put a crimp on the local office absorption.

Bisnow: The point about market volatility discouraging some from investing in certain asset classes is an interesting one. How do you see the role of institutional money evolving?

Brad: Historically, pension funds have done a fair amount of direct investment. Now, however, pension funds are moving toward more indirect investment to help spread risk. It looks like they are more inclined to go through a REIT or private equity fund to help diversify risk. At the same time, I see institutional investors pushing the PE funds for more favorable fee arrangements, putting pressure on the PE firm to do the same amount of work for less.

The PE firms still have to evaluate and manage the investments, report on performance, monitor markets, etc. They are getting requests to lower fees to help with overall investment performance metrics. Investors are pushing for fee breaks on larger investments and longer-term commitments.

To learn more about this Bisnow sponsor, click here.