Robotic furniture could be a boon to the real estate industry, helping to maximize small spaces for city dwellers and increase profits for developers.

Automated systems from Boston-based Ori Inc. can slide beds under wardrobes or convert desks into tables, simply with the press of a button. Like super-high-tech cousins of the Murphy bed, these systems essentially turn bedrooms into living rooms, or vice versa. They were invented by researchers with the Massachusetts Institute of Technology's Media Lab, and refined by Swiss designer Yves Béhar.

Haun sees the furniture as a benefit for budget-conscious renters who, instead of choosing a one-bedroom unit in a subpar building, might opt for a studio in a prime building. Take, for example, the hot neighborhood of Brickell in Miami.

“It's getting harder to even find opportunities to do anything there because of the existing buildings,” Haun said.

But one of ZOM's current projects, Solitair, is located across from Brickell City Centre, a high-end retail complex, and adjacent to Mary Brickell Village, a thriving shopping area. That gives tenants a wealth of entertainment choices within walking distance, and about 50 restaurants within a five-mile radius.

Haun surmises that tenants looking at one-bedrooms in other locations might instead choose a studio in Solitair, a 50-story, 438-unit building. With an Ori system, that would still give tenants a comfortable amount of living space.

Ori systems are not yet available on the mass market; the company is taking orders from developers. ZOM has pre-ordered units to install them in about 10% of the studio apartments at both Solitair and Avant at Met Square, a 43-story, 391-unit building in downtown Miami.

“At Solitar, the first units will come online end of this year,” Haun said. “At Met Square, March of next year.” 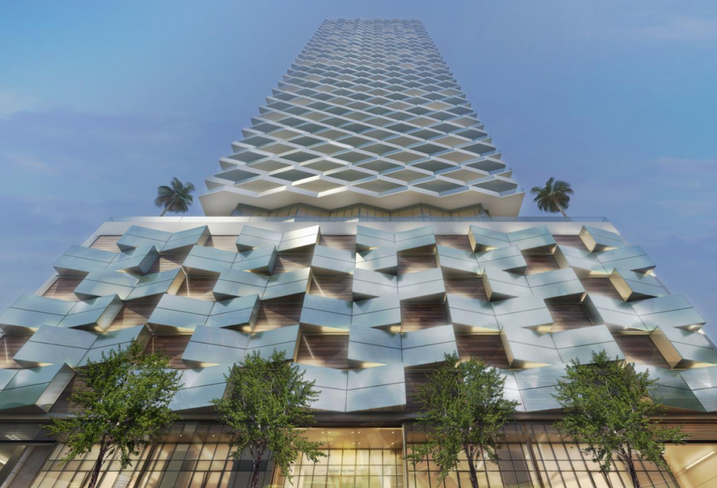 Courtesy of ZOM
Solitair Brickell is a 50-story tower by ZOM.

Haun said that ZOM has designed some units specifically to incorporate the furniture. Still, if they need to be taken out of a unit or moved, “they can be broken down and reinstalled easily,” Haun said.

Robotic furniture can also benefit developers by letting them fit more studios into their floor plans.

“If you can make them more efficient, with smaller units, there's an opportunity for sure,” Haun said. “If you got the same parameters to work within, and we're not restricted in unit count, you could potentially squeeze in more studio units that look, feel and operate more like a one-bedroom.”

Historically, the South Florida market has offered primarily one- and two-bedroom apartments, but he predicts that in future years, builders will focus on studios and one-bedrooms.

Haun first heard about Ori systems last year. He reached out to company founders and soon enough, ZOM became one of the developers partnering with Ori in a pilot program that is underway in 10 cities. Until its new buildings open, ZOM has one Ori system showcased inside a studio apartment in the Monarc at Met3, a 462-unit building that was completed in 2016 at 201 Southeast Second Ave. ZOM also just broke ground on Maizon at Brickell, a 262-unit multifamily complex, and Las Olas Walk, an eight-story project in Fort Lauderdale.

There are twin-, full- and queen-sized furniture units. They sell for about $10K apiece.

“The system looks clean and sleek,” Haun said. “It closes up nicely.”

"[The system] is designed to operate manually in case of power outage or malfunction, and we have a partnership with a national network of installers for any maintenance call," Larrea said. "All systems have a computer on them to deal with reliability, safety and connectivity to other smart devices like thermostats, speakers, lights, etc. The system can be disassembled the same way it gets installed.”

Ori is looking for applications beyond standard, for-profit apartment complexes. The furniture could even be used in affordable housing projects, where space can be a factor.

“The larger vision for the company is to expand the robotic technology behind Ori's first family of systems into many more solutions at different price points and for different markets," Larrea said. "In urban areas, where developers are dedicating a portion of their apartment unit mix to affordable dwelling units, Ori’s technology can help maximize space in a cost-effective manner if taken into account during the design process.”