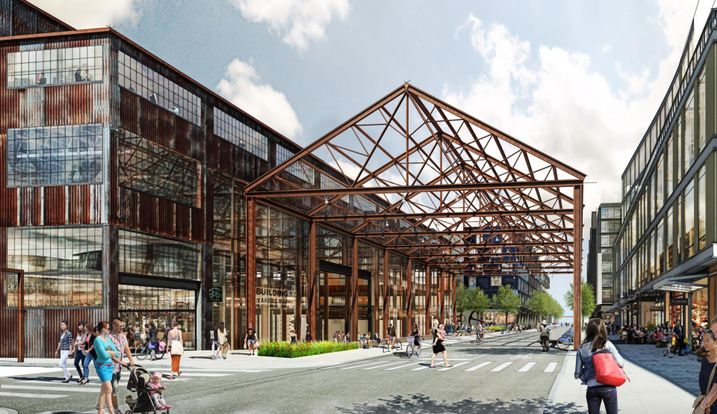 A host of factors enabled the Pier 70 developer (originally Forest City, which was acquired by Brookfield last year) to begin its project so quickly. Much of the work was done prior to approval, like when Proposition F passed in 2014, which allowed Pier 70’s tallest buildings to exceed a 40-foot height limit. But much of the quick turnaround can be explained by Forest City using several methods to garner community support for the waterfront project.

“I think they have a gold standard in community engagement,” Port of San Francisco Executive Director Elaine Forbes said of Forest City/Brookfield.

The Port owns most of the 69-acre master-planned Pier 70 area on which Brookfield is building, with Brookfield leasing its 28 acres from the Port on a long-term ground lease.

Brookfield Senior Vice President Jack Sylvan said his team went beyond the typical community outreach meetings in an effort to understand and extend the character of the adjacent Dogpatch neighborhood. In addition to those conventional meetings, Sylvan said the Pier 70 team hosted informative events on the site itself, including an “urban air market” that opened the site to the public for the first time in decades and presented the renderings to the community.

“Five thousand people showed up for an artist and craft fair with food trucks and music,” said Sylvan, who will join other developers and CRE experts at Bisnow’s San Francisco State of the Market event June 20.

Laura Crescimano and SITELAB urban studio, which led the design and master planning for Pier 70, also worked as the lead consultant for community engagement in the project.

The developer also hired S.F.-based graphic journalist Wendy MacNaughton to work with the Dogpatch and Potrero Hill neighborhoods. Sylvan asked MacNaughton to apply her work, which often entails sketching a certain area while talking to its inhabitants and using residents' own words to tell a story, to report back the pulse of the surrounding neighborhood.

The extensiveness of these efforts culminated in a development proposal neither the local community nor the city (or its most demanding planning commissioners) could refuse.

“Previously, the thinking for Pier 70 had been entirely commercial, mostly office,” Sylvan said. “And that doesn’t really look like San Francisco. That looks more like what happens on the Peninsula along the waterfront, like Oyster Point or something like that.”

A former shipbuilding hub, Dogpatch now teems with artists, restaurants and other creative industries that Sylvan says Pier 70 will accommodate. Currently in Phase 1, Brookfield’s three-phase project will result in not only up to 3,000 residential units (30% of which will be affordable and on-site) and 1.75M SF of commercial space, but also a 90K SF waterfront arts facility, a makers market hall and 9 acres of new parks and open space. 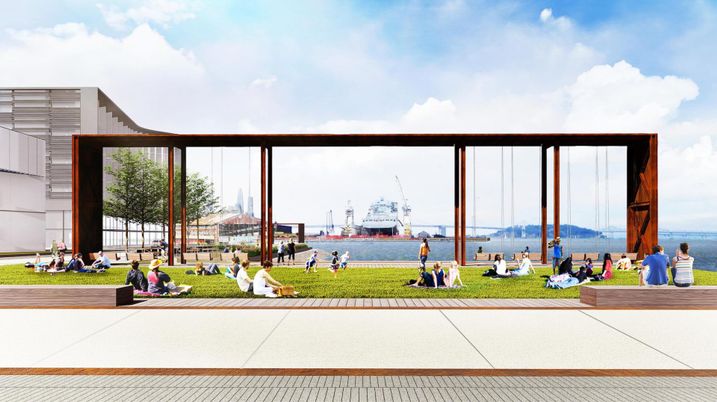 “It’s pretty common for master-planned projects to have residential and office or retail, but Pier 70 will have space for artists, space for makers, a focus on local tenants, and deliver a really high-quality waterfront park,” Sylvan said.

He said Brookfield would love to have a local grocer as the anchor tenant for the makers market, which he hopes also will include a brewpub or even a distillery paired with a bar and restaurant.

In its totality, the developer’s vision for Pier 70 is a far cry from the site as it has been over previous decades — the outcome of the company's ambition combined with the desires of neighboring communities and translated into the final design.

“One of the many issues for that area was that the connection to the bay was essentially cut off,” Forbes said.

Before the city approved Brookfield's proposal, staff described the Pier 70 area as containing 351,800 SF of buildings and facilities, most of which were deteriorating.

“People had never really been down to Pier 70. It had always been closed off,” Sylvan said.

Being so attuned to the community allowed the developer to start work unusually quickly in other ways as well. Sylvan estimates that before approval, Forest City spent $5M to $7M on design and engineering work that would have been lost had the proposal been rejected.

“The company felt comfortable with [advancing design work] because of the positive feeling about the project with stakeholders,” Sylvan said.

In addition, both stakeholder support and having already been on the ballot made it so no California Environmental Quality Act, or CEQA, lawsuit followed approval, Sylvan said.

Had Forest City and Brookfield’s community outreach not been so assiduous, the first phase of the development may not have started until around now. Instead, Brookfield will continue working on infrastructure through the summer and plans to break ground on a ground-up apartment building and the restoration of Building 12 (the makers market hall) by year’s end.

"The speed at which they moved from entitlement to being in the ground is extraordinary,” Forbes said.

Sylvan said the plan is to break ground on three more structures in 2020: the rehabilitation of an existing building into apartments, a ground-up condominium and a new office building. In all, Phase 1 of the three-phase project is slated to bring 665 units, 3.4 acres of new parks, the ground-up construction of five new buildings and the rehabilitation of three more, with the first buildings expected to open in 2021 or 2022.

Forbes said the Port, which itself has broken ground on the 9-acre Crane Cove Park on the northern edge of the Pier 70 site, is satisfied with the progress in the long-neglected area. Orton Development is finishing up its rehabilitation of six buildings in Pier 70’s historic core, and TMG and Presidio Bay Ventures are gearing up to break ground on around 250 units of the recently purchased Parcel K North, the San Francisco Business Times reports.

“One of the Port's major policy goals is to connect the city with the bay, and we've been trying to reimagine an active Pier 70 for some time because we see a revitalization of the area would not only be great for people who live in the area but for the entire surrounding community,” Forbes said.

“It's so rewarding to go to the site and see what's coming.”