In an age where the young and sociable set’s desire for new experiences is only rivaled by the retail market’s desire to create them, the sport of ax throwing has gained a serious foothold in a short time. 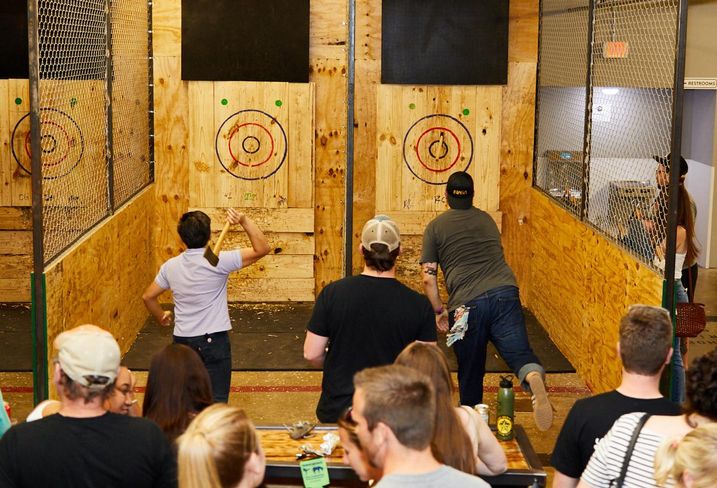 People have been throwing axes for sport for thousands of years, but the modern concept of a venue specifically dedicated to regulated ax throwing started in 2010, when Matt Wilson founded Backyard Axe Throwing League in Toronto after years of organizing it in his backyard. BATL had grown a following when Matt and Krista Paton visited in 2015, fell in love and co-founded Urban Axes in Philadelphia with partners Stu Jones and Shaun Hurley the following year.

For their first location, the founding quartet settled upon a former warehouse in the post-industrial neighborhood of Kensington — close to buzzy Fishtown, but cheap enough for a new company selling something no one had heard of. Matt Paton told Bisnow that when Jones described his vision for the space to the warehouse’s owners, one of them laughed and walked out of the building immediately. The other listened intently.

At that point, the only place offering ax-throwing in the U.S. was Stumpy’s Hatchet House in New Jersey, which had just opened in early 2016 and was a casual gathering place around a theme, according to Paton. Urban Axes owners certainly wanted to provide that, but they also wanted a place where the competition can become the focus, like the ongoing league the founders saw at BATL.

The concept took off immediately, with Jones and Paton quitting their full-time corporate jobs — “working for ‘The Man,’” as Paton put it — only four months after opening. They opened Urban Axes’ second location in Austin, Texas, on the one-year anniversary of its Philadelphia debut, and have since grown to locations in Baltimore and Durham, North Carolina, with Boston and Cincinnati opening before year’s end. In the first half of 2019, Paton expects to open four new locations, including one in South Philly. 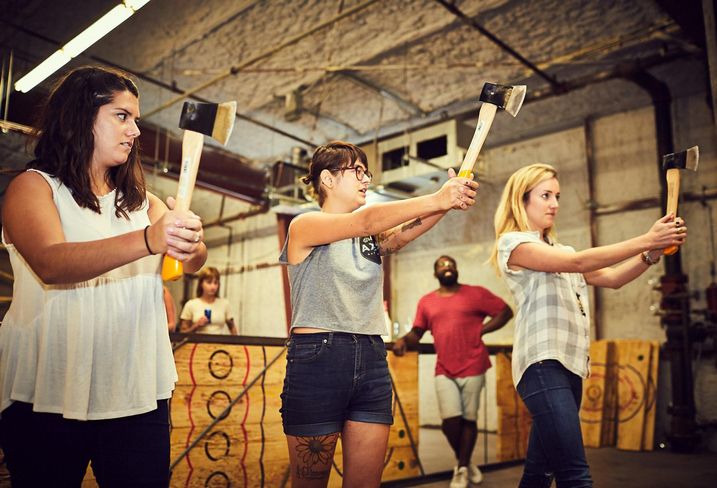 “We decided early on that we were a national brand, so having two locations spread out [between the East Coast and Texas] established that footing,” Paton said.

Any popular idea is bound to have copycats, and a retail market desperate for new ways to find experiences that beat a millennial’s couch is no exception. Mere months after Urban Axes opened in Philly, it joined with BATL and a few other early adopters to found the National Axe Throwing Federation. NATF member organizations follow the federation’s rules, from those governing competition to construction specifications that allow uniformity.

(Disclosure: The author of this article is a member of an ax-throwing league at Urban Axes' Kensington location.)

“BATL had grown and had a big, annual end-of-year tournament, and as other places started popping up, we decided to give a template for the best of the best,” Wilson said.

In the three short years of NATF's existence, it has grown to include 32 member organizations with 60 venues between them spread across seven countries — from Australia to Poland to Singapore.

“When we first opened [BATL], we were growing at what we thought was a rapid pace and membership was coming in quickly, but in the last 12-18 months, it’s been shooting through the roof,” Wilson said. “We’re fielding new calls all the time; we have about a dozen organizations in the pipeline that are in the process of getting started.”

Most organizations that wish to be a part of NATF start the process before they even build their first venue, and for a one-time, $100 startup fee, they receive guidance in how to space their lanes and arenas or what type of ceiling clearance they need, along with access to Axescores.com, NATF’s platform for scoring and recording statistics.

The statistics are a crucial element of NATF’s growth plan for ax-throwing, Wilson said. His next mission is to grow the concept of ax-throwing as a spectator sport, much like the cult ESPN2 favorite that the World Series of Darts has become. With more exposure, he figures, will come more interest and participation.

“An element that’s super important to growing a business and growing a sport is to be adaptable and be willing to evolve as it grows,” Wilson said. “My dream is to take this sport global, but before we get to that point, the shorter-term goal in the next year or two is to get to a point where we see our players competing in tournaments across America, wherein the prize money is their livelihood. I would love to build that through a series of grand slam tournaments, with regional and local events on down.”

As ax-throwing’s reach has grown, its diversity has as well. Urban Axes locates primarily in former warehouses to match the “gritty vibe” they want to cultivate, Paton said. And true to its name, the company stays strictly in urban areas with footprints between 6K and 12K SF. But multiple American locations are suburban and BATL has locations in two Toronto malls, due to both the concept’s growing popularity and retail landlords’ desperation to create experiences that will drive traffic to their locations, CBRE Global Head of Retail Research Melina Cordero said.

“Within bars, there was the big ping-pong trend a couple of years ago, then there were escape rooms, so there has been a push for group activities,” Cordero said, likening ax-throwing to bowling or fitness lifestyle brands like CrossFit. “It’s all part of the tenancy that’s an experience. It’s been around for a very long time, and it’s just taking different forms and different audiences.”

The bowling alley comparison is not lost on Paton, who said that Urban Axes’ inspiration for a South Philly location as a complement to its Kensington birthplace came from the local duo of North Bowl and South Bowl. Its next city will be on the West Coast, where Paton envisions opening two venues at once to capture greater market share from the start. 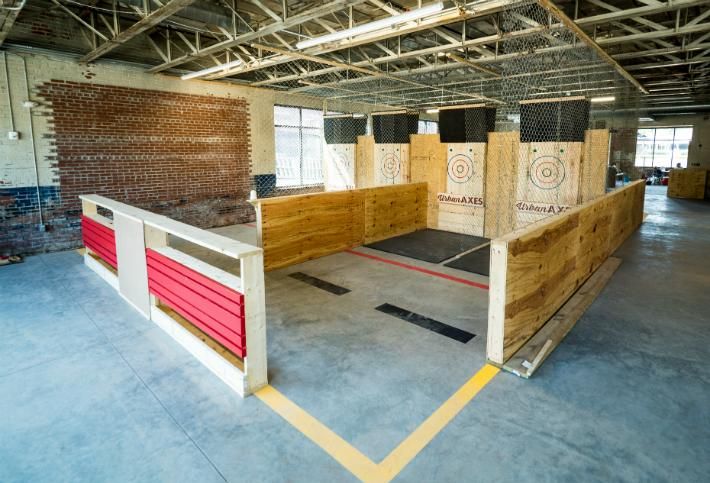 “There’s an element of success and an element of staking our claim,” Paton said when asked to describe the driving forces behind Urban Axes’ expansion. “While there are some competitors out there, we believe that Urban Axes is a superior experience.”

The words “superior experience” may sound like music to a retail landlord’s ears, and Paton said it comes from large numbers of extensively trained staff, so that supervision and safety are of the highest priority. For a retail concept that includes sharp projectiles and alcohol — Urban Axes’ Philly and Austin locations are BYOB and the others serve beer and wine, but no hard liquor is permitted in any location — safety is of the utmost importance to both landlords and insurers.

The guidelines established and maintained by NATF have gone a long way toward demystifying ax-throwing, according to Wilson. The organization that comes from a central governing body has proven to be crucial to ax-throwing’s viability as a real estate use just as it has been for its growth as a competitive sport.

“We’ve definitely heard from many organizations that the process of getting insurance and in with a landlord is much easier when they are associated with us,” Wilson said.

Ax throwing likely could not survive as a retail concept on competitive leagues alone, however: Group events are the industry’s bread and butter. More than that, they are the key traffic drivers that landlords covet.

“What becomes really interesting to analyze is when [ax-throwing venues] are going into malls, and what that means,” Cordero said. “Because then you can consider them in terms of filling vacancies.” 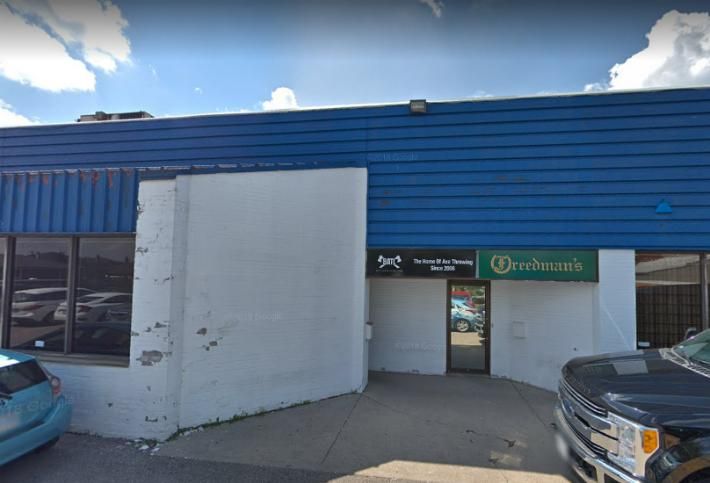 Paton claimed that at least one nearby bar began scheduling its Saturday shifts based on when groups would walk out of Urban Axes because of their tendency to want another beer or food after their event.

“Our primary product that we sell is a 2.5-hour structured event that people book one-to-eight weeks in advance,” Paton said. “So it’s a predictable amount of business, and that is a positive [for neighbors].”

Though Kensington’s proximity to Fishtown and position along public transit is the key driver of the neighborhood’s spike in real estate activity since Urban Axes opened, Paton has been struck by just how much transformation he has seen in the immediate surrounding area.

“It’s changed immensely, and I think that’s a positive, something we helped with, by bringing in groups of people for hours and adding vibrancy,” Paton said.

The sport’s pace of growth can’t be this feverish forever, and plenty of locations will fail for one reason or another, as is the case with any niche concept. But Paton and Wilson aren’t concerned with oversaturation.

“A lot of comparisons have been made to bowling, and there are many thousands of bowling alleys across the country,” Paton said. “With the expansion of the concept as a whole, I think there’s plenty of room for multiple locations in the same city, and Philadelphia is an example of that. There are around 10 ax-throwing locations in the area, and I don’t know how sustainable that is long-term, but we’ve seen enough sustained success for a second location.”

Even if ax-throwing never gains the level of mainstream acceptance as bowling, it has established itself as a viable retail format that can bring in the crowds landlords crave to energize their properties. In today's climate, that is as good as a bull's-eye.

CORRECTION, DEC. 3, 3:15 P.M. ET: A previous version of this article misstated BATL's full name. This article has been updated.