Learn About The Murders, Mysteries And Mishaps Behind 13 Haunted NYC Properties 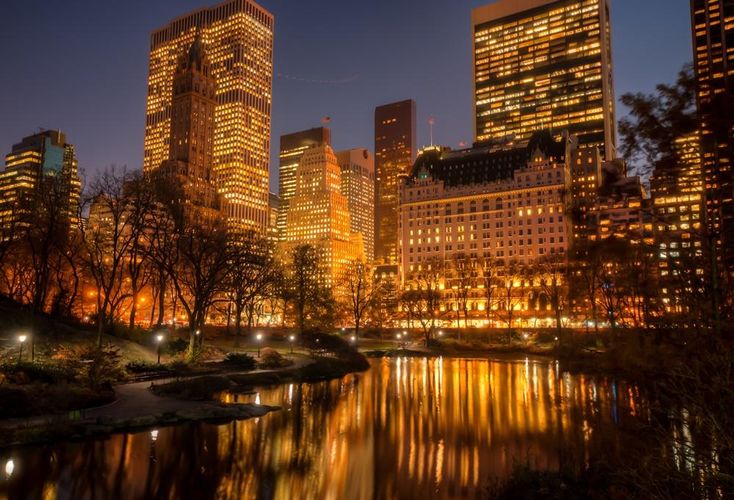 Saying New York City's history is "colorful" would be putting it lightly, and any city with this much...activity is bound to be a hotbed of restless souls. The city has dozens of properties with spooky, scary stories, but here are 13 that are particularly spine-tingling, in honor of Halloween in a little more than two weeks. 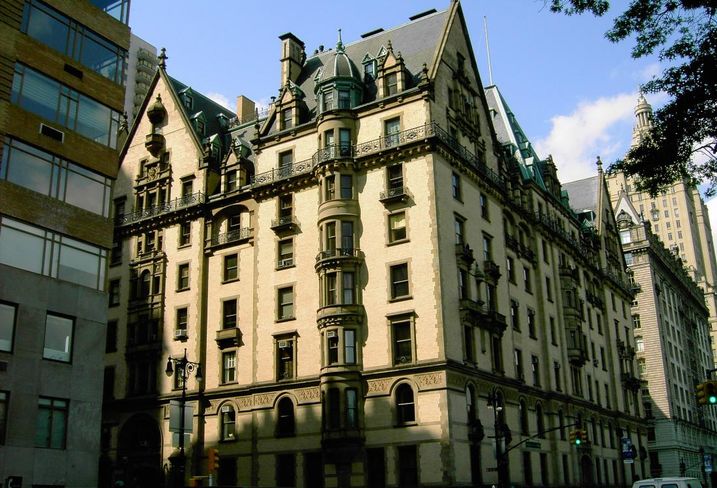 The historic co-op building was constructed on the corner of Central Park West between 1880 and 1884, but the weirdness didn't start until 1960s, when construction workers claimed to have seen an apparition of a man’s body with a young boy’s face.

Workers and residents have also frequently claimed to see a little girl dressed in period clothing, smiling and approaching residents.

The Dakota is also the site of John Lennon’s murder, and his ghost has been reported by various witnesses, including Yoko Ono, who saw the late Beatle sitting at his piano and heard him say, “Don’t be afraid. I am still with you.” John himself also claimed to have seen a ghostly figure, who he called The Crying Lady.

It was also the setting of Roman Polanski's Rosemary's Baby, if that wasn't enough for you. 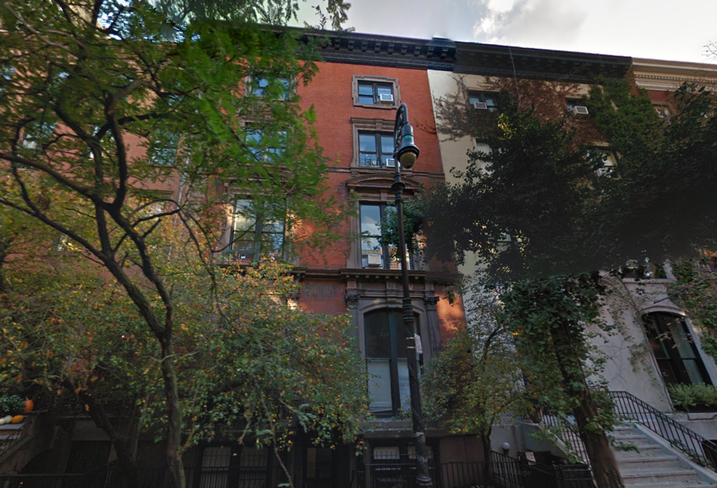 The West Village townhouse's ominous moniker comes from the fact that it houses 22 ghosts, including the white suit-clad spirit of Mark Twain, who stayed here from 1900 to 1901. In the 1930s, one resident said Twain came to her at the stairwell and said, “My name is Clemens and I has a problem here I gotta settle.”

The house was converted into 10 apartments in 1937, but the hauntings didn't stop, and reports of a lady in white, a young child and a gray cat were all too common. 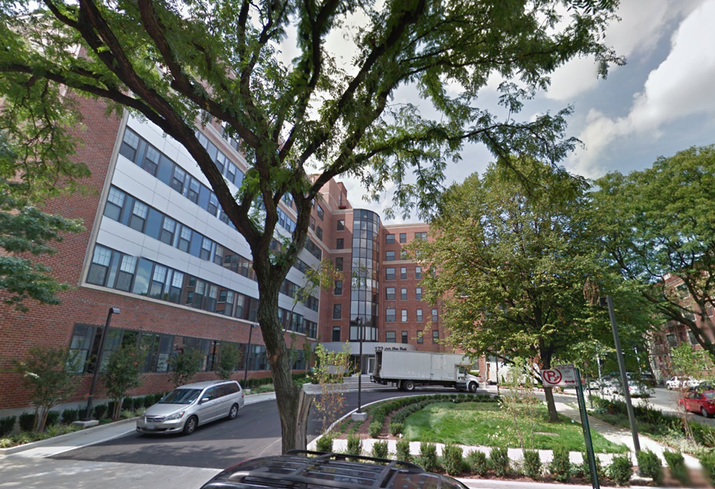 Formerly Caledonian Hospital, this Brooklyn luxury rental building boasts a roof deck, a fitness center, a yoga studio, a playroom and the ghosts of the former patients.

After opening in 2014, residents have reported strange voices and footsteps, eerie visions and horrific smells.

Three doormen fled the building over six months, and a doorman bluntly told the New York Post that the building “is a messed-up place to work because it’s haunted.” 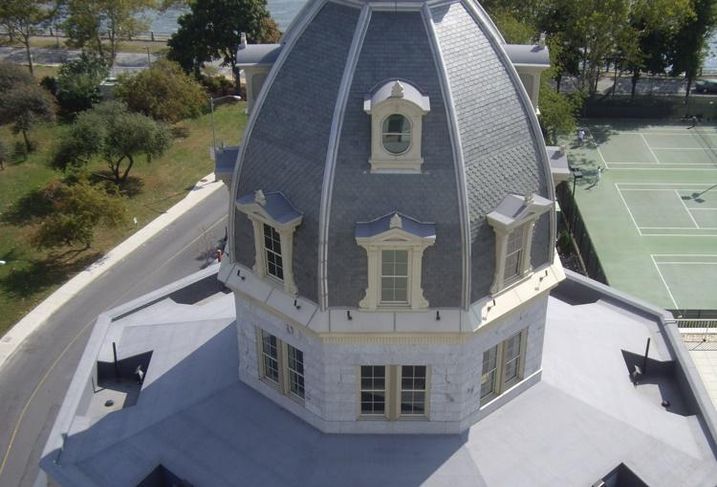 It was an insane asylum closed for staff neglect and abysmal conditions. Do we need to say more? Well, just in case...

Built in 1834, the building originally served as the main entrance to the underfunded, overcrowded NYC Lunatic Asylum, which opened in 1841 and was the center of the Nellie Bly's landmark 1887 exposé on the mistreatment of asylum patients, Ten Days in a Mad-House.

After years of decay and two fires, the hospital's last remnant was close to ruin, but was restored and incorporated into a large apartment complex. It now utilizes solar panels and fuel cell installations and has a LEED Silver Certification.

But green tech doesn't keep the ghosts away, and residents have reported various paranormal incidents, including pets refusing to go near the building's stairs. 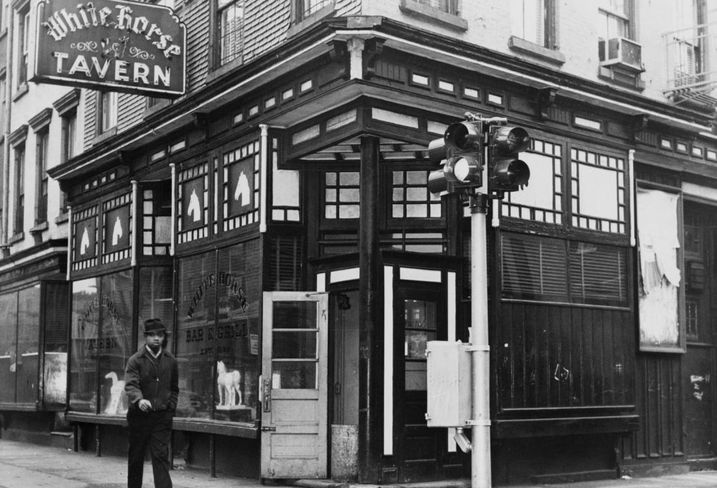 When it originally opened in 1880, the White Horse Tavern was more of a longshoremen's bar, but, in the '50s, it became a major gathering place for Greenwich Village's Bohemian writers and artists. Famous patrons included James Baldwin, Bob Dylan, Jim Morrison, Hunter S. Thompson and Jack Kerouac, who was thrown out of the tavern several times to the point someone has written "JACK GO HOME!" on a bathroom wall.

Poet Dylan Thomas went the extra mile, supposedly drinking himself to death with 18 shots of whisky. Although his spirit mainly "resides" at the nearby Chelsea Hotel, where he died, he seemingly can't deny himself a good drink even in death, and visitors claim he still sits at his favorite corner table and hangs around outside the tavern. Bartenders say beer and shot glasses randomly appear at his table. 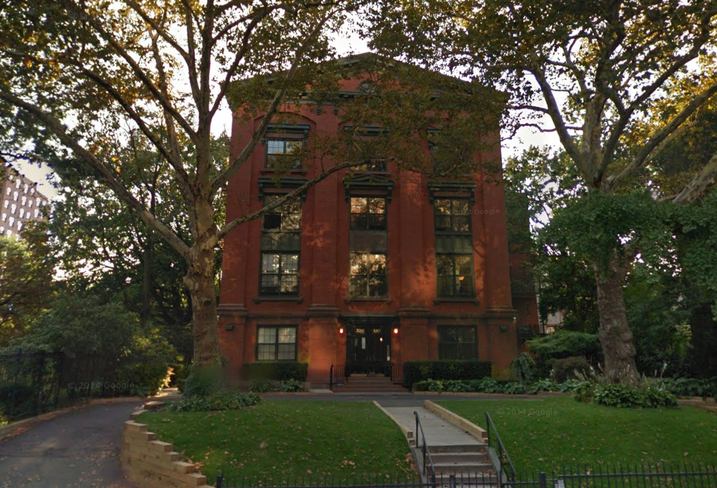 The imposing brick building in Clinton Hill was originally a state-run asylum for homeless, poor women. After it's closing in the 1950s, the building found a new, more...interesting life as The Bull Shippers Hotel, a drug and prostitution den.

Overwhelming reports of illicit activity saw the building shut down, boarded up and painted black in 1985, and it was only a matter of time before rumors of hauntings began to arise. Even since the building was converted into luxury condos in 2001, there have been countless reports of spirits of women, young and old. 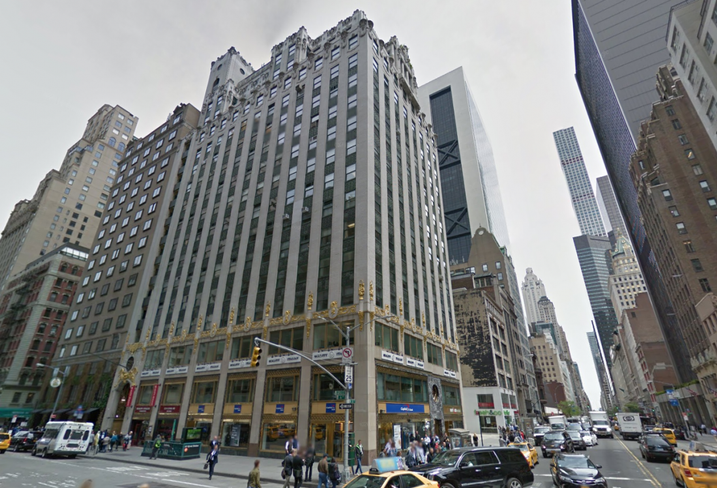 In the '20s, Albert Champion—French track cyclist and spark plug inventor—married Edna Crawford. Albert, the larger-than-life figure that he was, had been married before, but it ended after his numerous, high-profile affairs led to his first wife divorcing him and sue for "extreme cruelty."

Edna, a showgirl, took a different path. After beginning an affair with Charles Brazelle, the two lovers supposedly killed Albert, although they told police Charles had punched Albert and the cyclist died of a "weak heart."

The two used the inheritance from his death to buy the tower's penthouse. Things turned sour, and a jealous Brazelle held Crawford prisoner in the penthouse until beating her to death with a telephone. He was then tossed out the window by Crawford’s bodyguards (who knows where they were before...).

Vacant for years, the penthouse was bought by Carlton Aslop, who abandoned it and committed himself to a mental hospital after multiple horrific sightings, hearing both Edna's high heels and the couple's violent arguments, his wife leaving him, and his dogs having nervous breakdowns. 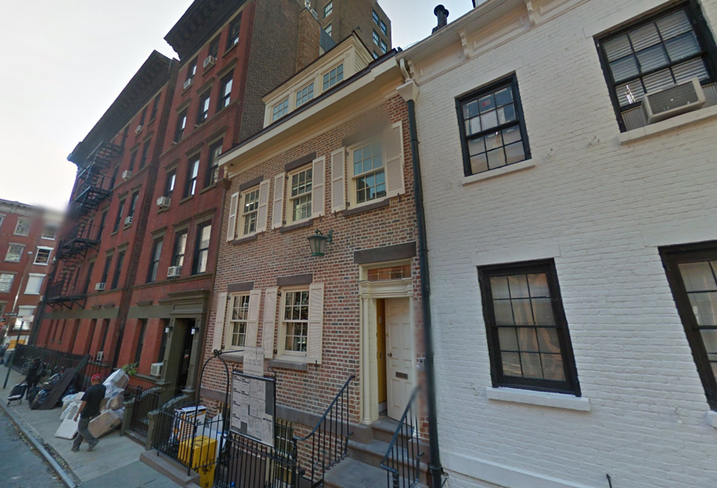 This Prohibition-era speakeasy was purchased by corrupt mayor Jimmy Walker as a home for his mistress and chorus girl, Betty Compton. Neighbors have insisted they've seen flapper-era men and women roam the streets, as well as a dapper figure in a cloak and top hat known as the "Gay Street Phantom." 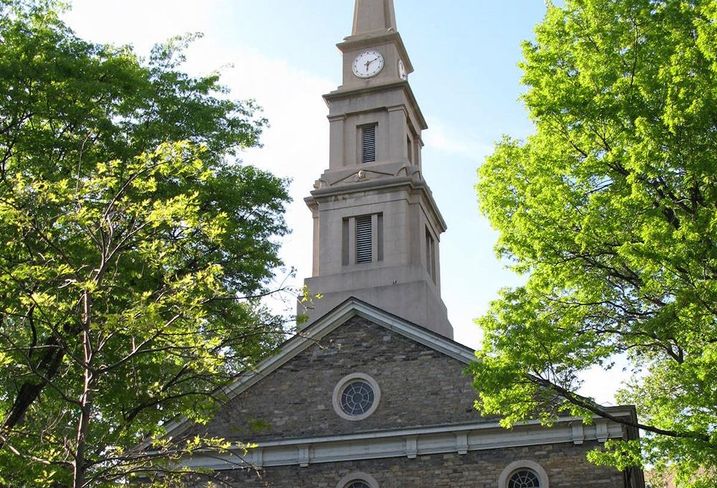 The centuries-old church is not only New York's oldest site of continuous religious practice and the second-oldest church building in Manhattan, but it's also the burial site of New Amsterdam governor Peter Stuyvesant, who was buried in a vault under the chapel in 1678. "Ol' Silver Leg," as he was known for his ornate prosthesis, still harasses holy men by ringing bells and singing Calvinist hymns. 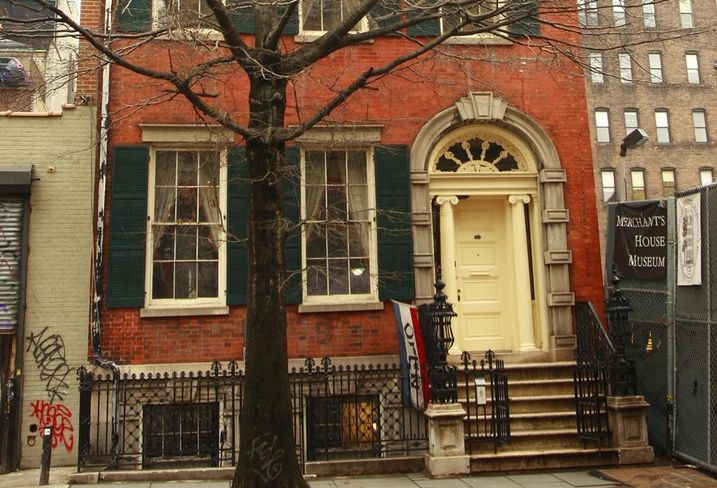 Wealthy merchant Seabury Tredwell and his family moved into this Noho townhouse in 1835, and the massive family's influence has been felt ever since.

Gertrude Tredwell was born, raised and lived in the house for 93 years until her death. Living alone for 24 years, Gertrude was supposedly obsessed with preserving her home as the surrounding neighborhood transformed into tenements and semi-industrial properties.

Some say she's still knocking around, and more than 100 incidents total have been reported since the museum's staff began recording them 15 years ago.

Some have even claimed to see full body apparitions during the day. In 1995, a state Judicial Department official claimed to have had a conversation with a "tattered and musty" gentleman, who then mysteriously vanished. The staff told her the man was the long deceased son of Samuel Tredwell. 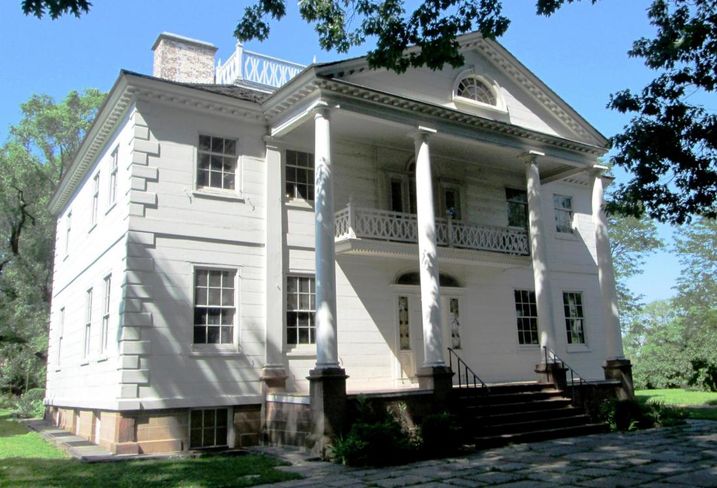 Photo: Wikimedia: Beyond My Ken

Built in 1765 by British military officer Roger Morris, this Washington Heights relic served as HQ for both sides at different points in the American Revolution. It was then purchased in 1810 by French merchant Stephen Jumel for him and his wife, Eliza Bowen Jumel.

When Stephen died in 1832 from injuries received in a carriage accident, Eliza, then one of the wealthiest women in the city, married Aaron Burr. After her divorce in 1836, Eliza supposedly descended into madness and died in 1865, with many declaring her eccentric and insane. She supposedly still wanders the house in a purple dress, banging on walls and windows. In 1964, when a group of schoolchildren toured the home, her ghost appeared and told them to be quiet.

But she's not the only spirit that calls the mansion home. The ghost of a young servant girl, who committed suicide by jumping out of a window, has been seen in the mansion's servants quarters. A Hessian soldier from the Revolution has been seeing coming out of his portrait on the wall. There's also a talking grandfather clock.

On the lighter side, the house once overlooked the Polo Grounds baseball and football stadium, and Lin-Manuel Miranda wrote portions of his hit musical Hamilton at the mansion. Maybe the clock gave him some good lyrics. 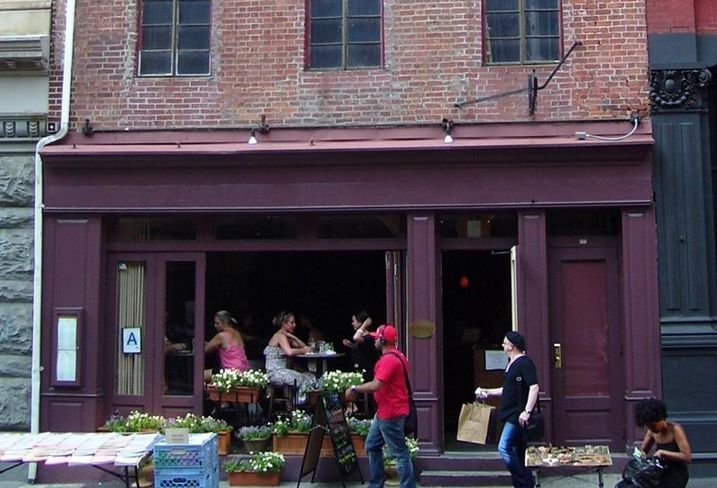 Photo: Wikimedia: Beyond My Ken

Located in the heart of COS's SoHo shop sits an 18th century well. The site, once known as Lispenard's Meadow, was not only the possible location of a British sex prison, but also the scene of one the most infamous unsolved murder cases in NYC history.

In 1799, Gulielma Elmore Sands left her boarding home to meet Levi Weeks, with whom she was having a secret romance. Two weeks later, Gulielma's body was found at the bottom of the well, with clear suffocation marks.

Levi was accused of murdering Gulielma in order to hide a pregnancy. Despite public outcry, he was acquitted with the help of the city's top attorneys: Henry Brockholst Livingston, Aaron Burr and Alexander Hamilton. The true killer was never found.

The well was built over in 1817 and remained undiscovered until 1980, when work was being done in the building. Since then, many believe Gulielma has begun haunting the property. Perhaps this is why the now-shuttered Manhattan Bistro had such terrible Yelp reviews? 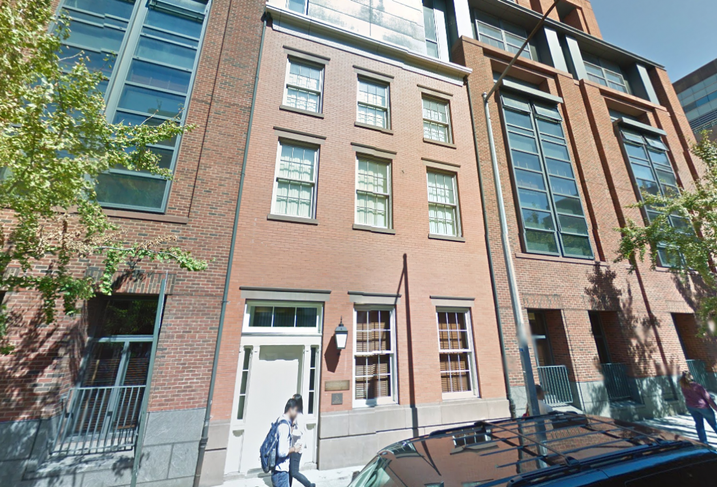 Anything associated with Edgar Allen Poe is bad news, cosmically speaking, and this Greenwich Village building is no different. The building served as the ill-fortuned author's residence from 1844 to 1846, where he wrote The Cask of Amontillado and parts of The Raven.

Although a majority of the house was demolished in 2001 to make room for NYU Law School's Furman Hall, the university kept a facsimile of the building's façade and one original banister. Law students have seen Poe's spirit climbing the banister, although it doesn't lead anywhere in the building.