Will New Jersey Keep The Momentum For 2016?

New Jersey had a strong 2015 from a development, leasing and investment standpoint. But will that momentum continue? We asked the experts last week at Bisnow's Fifth Annual New Jersey State of the Market event at the Newark Club. 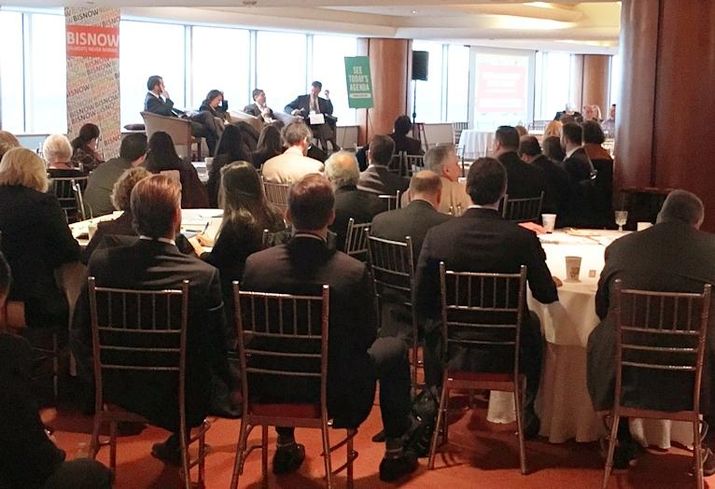 Technology is one of the hottest topics for the industry, so we gathered VTS regional director Alec LeFort, whose firm produces lease and asset management software for 2.6B SF, and Onyx Equities managing principal Jonathan Schultz, who, as an owner and investor, embraces technology to stay ahead.

One thing Bisnow often hears about is reluctance to adopt new technology in the industry.

What technology operators need to do is reduce the level of concern people have about adopting technology, Alec says. It shouldn't be a daunting, scary or time-consuming process. Provide the resources to remove those burdens, he urges.

Companies also need to be able to justify the cost of their technology and show an ROI that impacts users' bottom lines. For instance, Alec explains, if you can access information and make a decision quicker than your competition, you're going to make money. If a broker can expedite a negotiation, he'll get his commission more quickly.

What's the cost if you don't implement technology? Jon says the industry is at a point where it needs to adapt. He acknowledges it's difficult to understand sometimes, especially as you're just getting into the fray of technology and changing the way your entire company is going to work.

"In your heart, you have to believe that this is real and it's going to work," he noted. He believes that with the demographic shift to a workforce that's 50% Millennials—who were born with cellphones in their hands—there will be more expectation of having tools that will make work more productive. "As a company, and an industry, if you don't start thinking that way, you're going to be at the back of the bus as time goes on."

Executives are fundamentally hurting their companies by not taking the leap and understanding the power you can get from technology. "It boils down to the most natural emotion in our lives and business lives—fear," Jon adds. It's critical to get everyone involved from every level to assuage that. 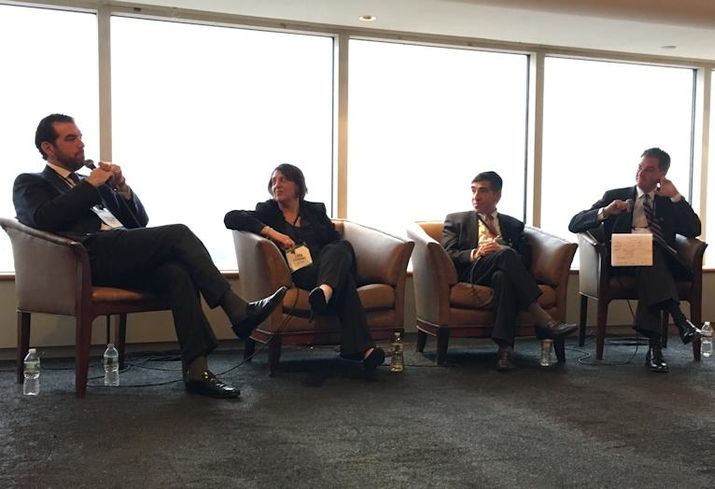 Somerset Development is behind Bell Works, a repositioning of the 2M SF Bell Labs in Holmdel. The project is part of an even bigger trend in NJ, in which the state suffers from having a lot of vacant, to-be-vacant or should-be vacant office parks.

"These are mind-numbing places where no one wants to go to work and are built for the old way," Ralph said.

But as people are freed from their desks, no one wants to sit in a cubicle farm anymore. Somerset is taking advantage of the Bell Labs location and giving the suburban campus an urban vibe where people could collaborate and not have to battle two hours of traffic to get to work.

On the residential side, Ingerman is also grabbing on to the trend of revamping underutilized space. One example is a planned apartment building in Bayonne that is taking the place of an old parking lot. "When we look at communities, we're looking at places that are good to live, where people want to be, have a social aspect and great commuting, and are adjacent to transportation," Lara says.

She believes that Bayonne is the next big area of development along the Gold Coast, and she described the town as having great bones, a municipality with an administration that wants to work with developers and a downtown revival. "Where we're going as a development company is looking at the whole package."

Jonathan says it's about accessibility and visibility, whether residents are in suburban or urban environments. What they care about is one, price and two, getting in and out of New York City quickly.

"We focus on how close we are to public transportation that will get you into Manhattan," he said. "Are we within 500 to 1,000 feet of a PATH station?"

Overall, tenants want a clean, safe environment filled with amenities that they'll actually use, he says, whether swimming pools or bowling alleys. Covered parking, gathering spaces and a 24/7 doorman are basics, but what they've come to expect. "We're all competing with the best amenities and being creative so we can edge out each other for tenants." 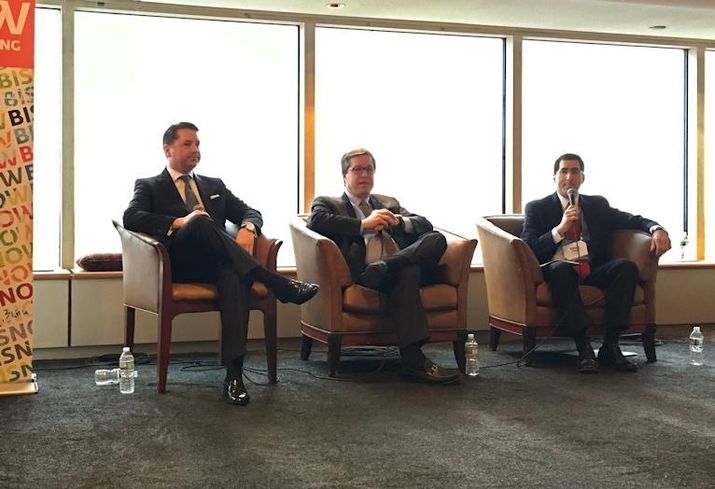 David noted that in 2015, Colliers research shows there was more leasing activity in the office sector in NJ since there's been in 2002—that's 15.3M SF of leases signed, and 21 of those leases were 100k SF or more, compared to only 12 in 2014. Average asking prices were up 2.2% across the board, and there was 2.6M SF of positive absorption.

Chris said Mack-Cali's activity over its portfolio (24M SF of office and flex space) was well above the three-year average and saw positive absorption and decreased vacancy, while the REIT has been able to drive rents in Parsippany and Jersey City. He expected a similar pipeline in 2016, but one note of concern—and it's only anecdotal—is that he's heard tenants talk about layoffs. "That may be a storm cloud on the horizon."

Jeff said SJP, which has 5M SF in NJ, also had a terrific year on the leasing side, with several tenants expanding (including Valeant in Bridgewater, which started with 150k SF and has grown to 620k SF with SJP in 24 months). Overall, there was a significant increase in occupancy rates and rents, but some markets were stronger than others. He also expects 2016 to be a positive year for both leasing and build-to-suits, the latter of which he's seeing more.

Chris and Jeff agree that the waterfront is going gangbusters, and there's a barrier to entry, especially in Jersey City, where there's been a dearth of development sites due to the residential boom. Princeton is experiencing a dramatic slowdown in activity, they also said. And the pair had differing opinions on Parsippany and Morris County's overall office health. 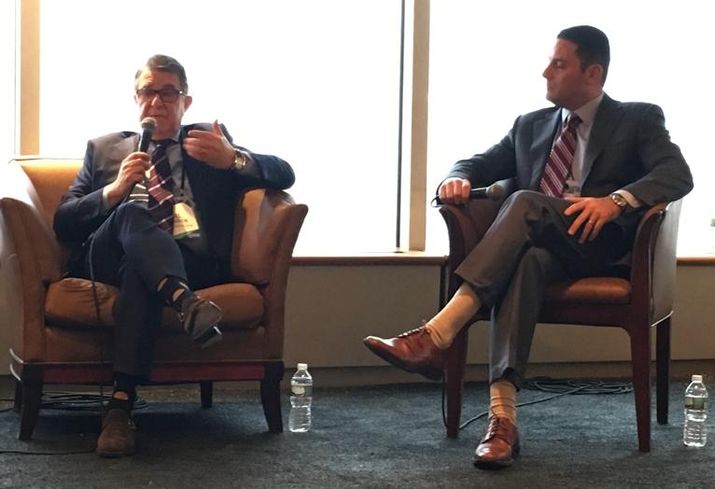 One of the biggest topics that our investment and development panel covered was the industrial market. Lincoln Equities Group president Joel Bergstein (left, with Cole Schotz member John Stewart, who moderated) says his company's greatest focus is on warehouse distribution, and this is the global era for that product in NJ and surrounding states, driven by the market's e-commerce and retail focus.

"The buildings need to be bigger, delivered faster and designed in ways different from years gone by," he said. But there's difficulties, particularly with available land and entitlements. The sector requires a lot of speculative building to meet timing needs, and he says that Lincoln is pretty far out on the spec side of things.

"We look forward to that continuing in a judicious way throughout 2016," he said. 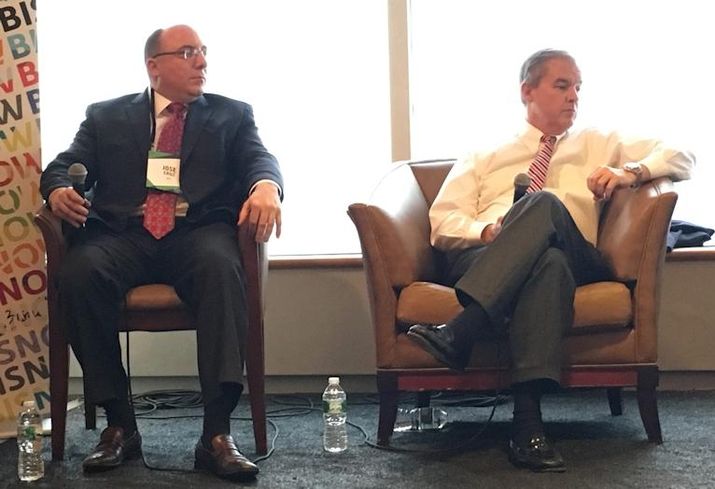 Matrix Development Group CEO Joe Taylor (right, with HFF senior managing director Jose Cruz), who's also in that space, said industrial developers all want to be on the corner of Main and Main with their boxes, but that intersection has been largely taken. "We're finding reasons to be in some more discreet markets," he said, noting a 1M SF project Matrix is developing in Salem County to service the Philly market. "Would I rather that be an 8A or 7A or further north? Yes, but it's just not available to us for the most part."

Joel agrees, noting that Lincoln is building in Piscataway, a market it would have never considered five years ago.

Joe continues that in order to be successful, you have to supply all the "must-haves" like truck storage and auto parking, and if you don't, you're off the list right away. "Your buildings have to be designed to do an Amazon, which is a challenge unto itself, yet work for a more conventional user."

Jose notes that many current industrial buyers are underweighted and in need of product. The challenge: there needs to be an opportunity to buy enough of the product to make a dent. "You can buy a $100M multifamily deal or buy a $100M retail deal, but trying to find a $100M industrial deal is difficult unless it's a portfolio, which is very hard to come by in the Tri-State. Demand is there, supply is not."

And when investors do find product, the pricing—especially in the Meadowlands—can have cap rates in the 4s with potential leasing risk and PSF prices north of $200. "It's an interesting time in the industrial market, and some of the deals are even worth more than the office market," he adds.