9 U.S. Museums That Are Works Of Art

While museums house some amazing works of art and exhibits, many museums are blocky and indistinguishable from one another. The architects of these nine museums stepped away from traditional museum design to create some amazing buildings that are just as memorable as the artwork inside. 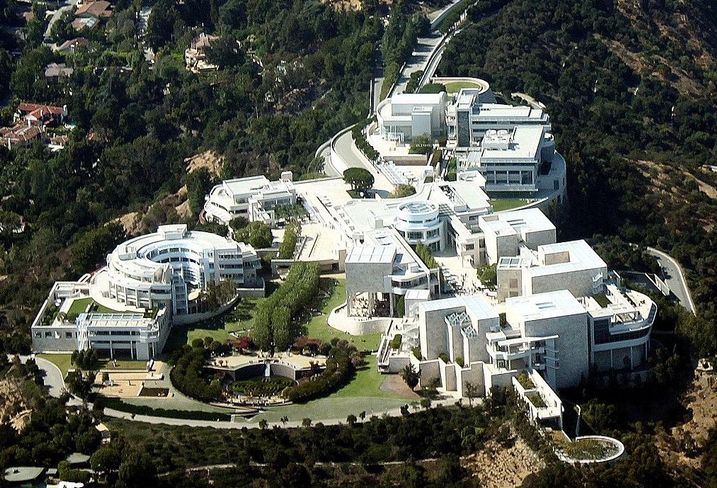 The Getty Center not only houses thousands of pieces of artwork in one of the most eye-catching buildings along the 405 freeway, it also offers among the most stunning views of Los Angeles. The museum designed by Richard Meier sits on a 110-acre hilltop site within the Santa Monica Mountains.

When the idea was first conceived in 1987, the Los Angeles Planning Committee issued a height limit that led to more than half of the building being below the hilltop level. Construction used about 300,000 pieces of travertine quarried in Italy and used for cladding or paving. The site has about 1M SF, most of which is underground. The architect’s plan also included a large central garden, which was taken on by artist Robert Irwin. His work included a zigzag walkway for the garden and a water feature. 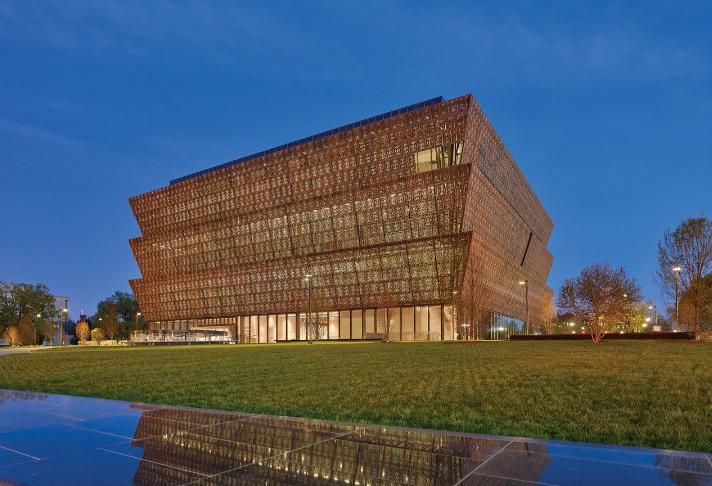 While the David Adjaye-designed National Museum of African American History and Culture in Washington, DC, displays more than 37,000 objects highlighting African-American history, the building is meant to serve as a powerful symbol. The 400K SF building’s exterior uses 3,600 bronze-colored cast aluminum panels shaped similarly to a traditional Yoruban crown. The three-tiered exterior also is meant to symbolize hands in prayer. 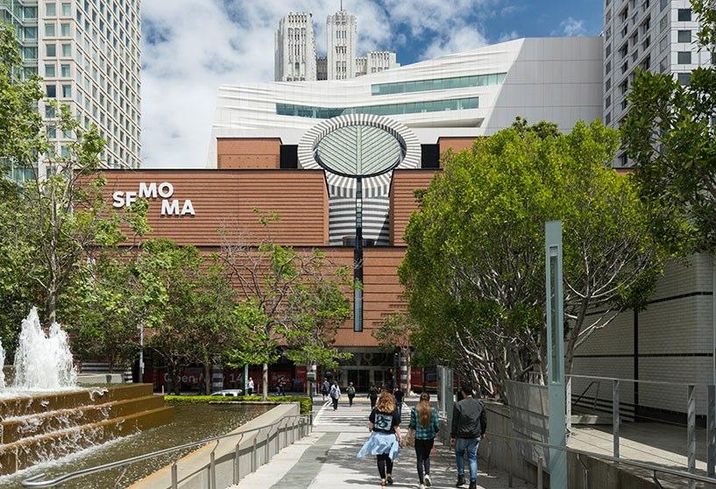 A renovation at the San Francisco Museum of Modern Art created 170K SF of new and renovated indoor and outdoor galleries. The new building designed by Snøhetta added 45K SF and was partially inspired by the water and fog of San Francisco Bay. The new building has 700 shaped and fabricated fiber glass-reinforced polymer panels. Depending on the time of day, the movement of light and shadow animates the rippled surface. Silicate crystals embedded into the surface reflect the light. The SFMOMA is one of the first museums to use LED lighting throughout the gallery space. The museum is targeting LEED Platinum certification. 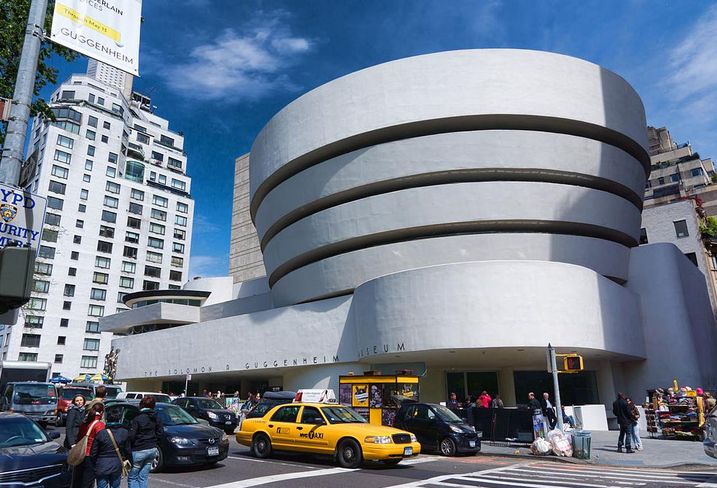 When Frank Lloyd Wright was commissioned to design a building to house the Museum of Non-Objective Painting in 1943, he spent 16 years drawing 700 sketches and six separate sets of working drawings for the building. Construction did not begin until 1956 and was finished six months after Frank Lloyd Wright’s death. The design features a spiral ramp that reaches toward a domed skylight. Wright originally envisioned a 10-story tower behind the small rotunda, but the plan was scrapped for financial reasons. In 1990, Gwathmey Siegel & Associates Architects revived the plan with an eight-story tower museum expansion.

Museum of Contemporary Art in Cleveland 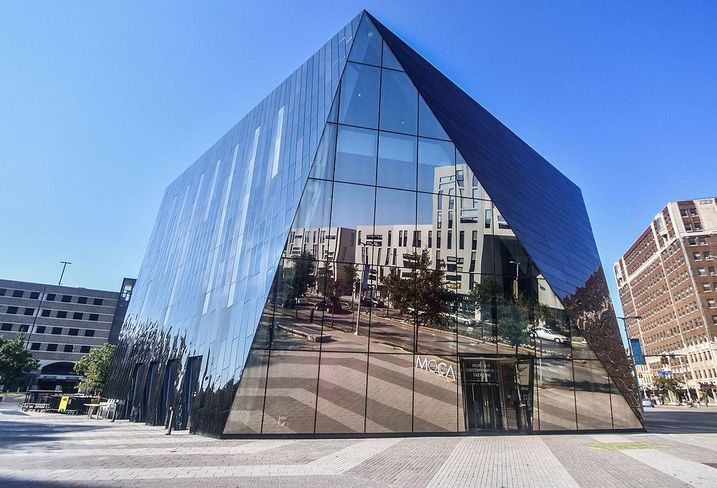 The Museum of Contemporary Art in Cleveland fast became the gem of the city. The museum’s 2012 expansion was the first U.S. building to be designed by Farshid Moussavi Architecture. The four-story, 34K SF building provides a geometrical form with a six-sided base and four-sided top, creating eight triangles and trapezoids. The exterior features reflective black stainless steel and uses geothermal wells under the adjacent plaza to heat and cool the panels. The MOCA is certified LEED Silver.

Modern Art Museum of Fort Worth 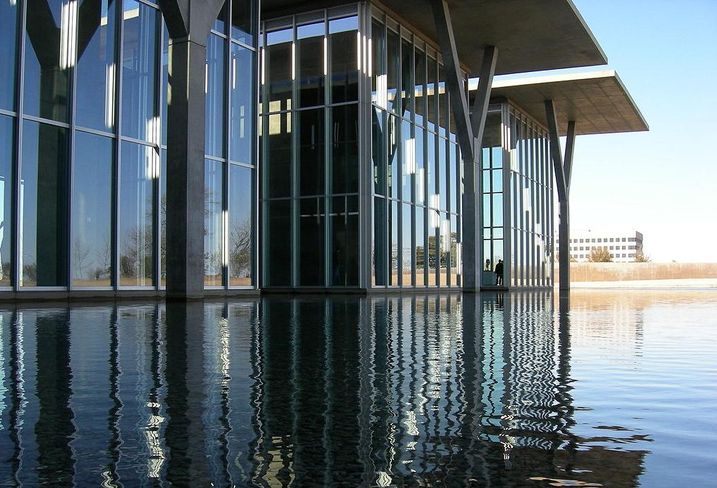 Transparent glass-framed walls 40 feet high surround the Modern Art Museum of Fort Worth. The building, designed by Japanese architect Tadao Ando, includes a reflecting pond, outdoor sculpture and landscaped grounds. The design was influenced by a need to use diffused and reflected natural light within the gallery. Cantilevered cast concrete roofs provide shading to the exterior and allow for natural light to enter the galleries. At night, the building looks similar to a large lantern floating on a reflecting pond. 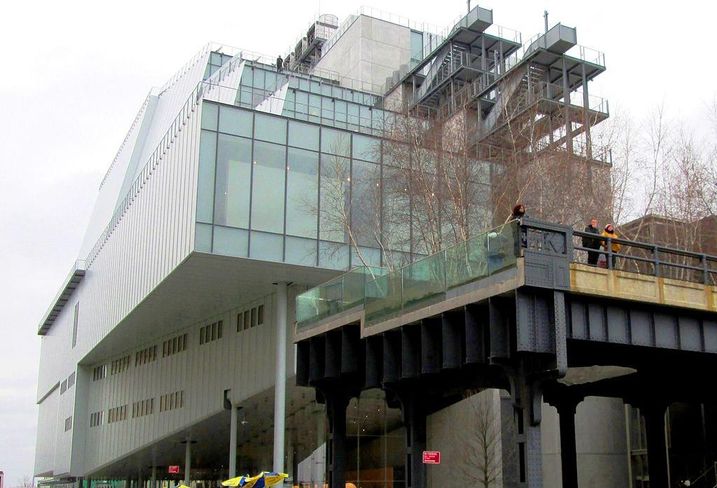 Beyond My Ken / Wikimedia Commons
Whitney Museum of American Art

The Renzo Piano-designed Whitney Museum of Modern Art offers 50K SF of indoor galleries and 13K SF of outdoor exhibition space. The museum's 18K SF special exhibition gallery is the largest column-free gallery in New York City. The design uses asymmetrical forms as a reflection of its location in the industrial Meatpacking District. The eight-story building’s exterior is clad with pale blue-gray enamel steel panels. The entrance is within a cantilevered plaza that serves as a public gallery. The museum also houses a 170-seat theater with views of the Hudson River. 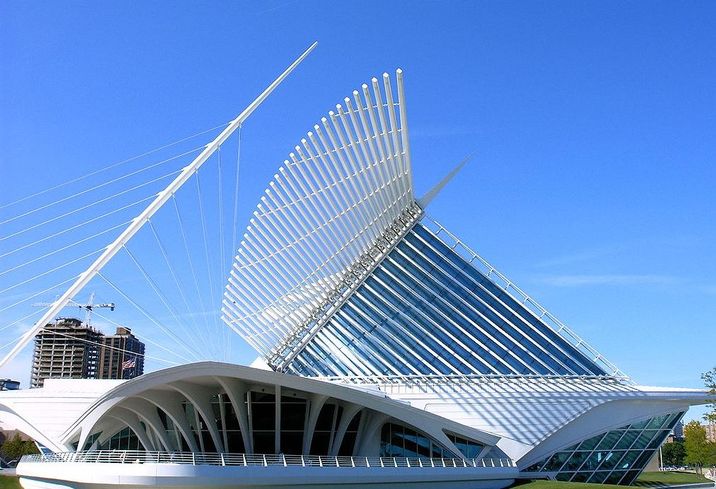 Andrew C. / Wikimedia Commons
The Quadracci Pavilion at the Milwaukee Museum of Art

Three architects played a part in designing the three structures at the Milwaukee Art Museum. Eero Saarinen designed the War Memorial Center as an art collection and veterans’ memorial. The modernist building is shaped like a floating cross and has wings cantilevered from the central base. The Santiago Calatrava-designed Quadracci Pavilion offers a vaulted 90-foot-high glass ceiling and a movable 217-foot sunscreen that unfolds and folds twice daily. A pedestrian bridge connects the museum to the city. The Cudahy Gardens designed by Dan Kiley incorporate lawns divided by hedgerows and fountains. 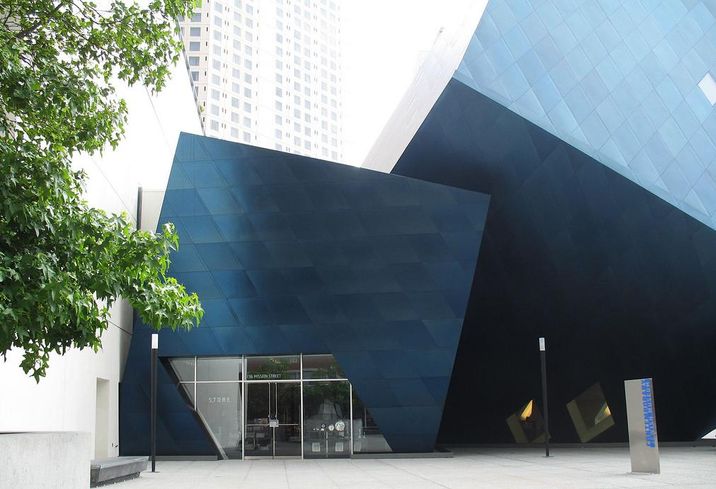 The Contemporary Jewish Museum used to be the Jessie Street Pacific Gas & Electric Power Substation designed by Willis Polk. In 1998, Daniel Libeskind was commissioned to design his first project in North America. As part of the conversion, the architect created an extension with 3,000 luminous blue steel panels that change color depending on the time of day. These panels were treated with a chemical bath that will prevent them from decaying, fading or chalking. Libeskind’s design is based on the phrase "L’Chaim" (to life), and the extension is meant to look like the Hebrew letters that spell the word for life, the “chet” and the “yud.”