In the first month after the coronavirus ground the U.S. economy to a halt, the opportunity zone marketplace had slowed along with the rest of the commercial real estate industry.

The opportunity zones program has been described by the Trump administration as a tool to inject hundreds of billions of dollars into underserved communities. In its first two years, the program had yet to live up to the buzz it generated throughout the industry.

But over the past month, opportunity zone investors have been some of the most active players in the real estate market, closing deals and starting new projects as most traditional sources of capital stay on the sidelines. 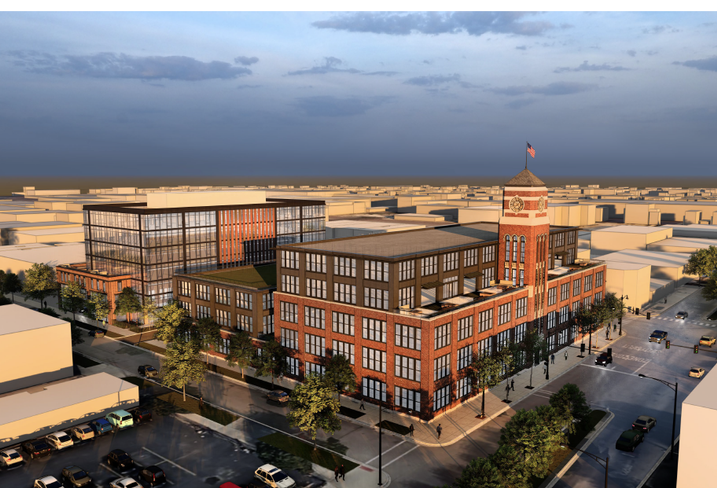 “I do think that the coronavirus is the direct trigger to the uptick in the opportunity zone investments,” Chicago-based developer Phil Denny said. “The stock market pausing and a downturn occurring after such a long run-up have people wondering what to do with their capital gains.”

Several qualified opportunity zone fund managers and experts say they have noticed a considerable increase in the amount of deal activity occurring in recent weeks. This has included a flow of new money coming into opportunity zone funds, and many deals that had been in the works closing and moving forward with construction.

“There has been an uptick in activity both from [opportunity zone] funds raising capital as well as transactions occurring since mid-April, where it seems like some of the momentum that had been built in Q3 and Q4 is coming to fruition,” Economic Innovation Group Director of Impact Strategy Rachel Reilly said.

The program relies on investors deploying capital gains, and the volatility during the pandemic led to them pulling money out of the stock market and searching for a place to park it. Many have chosen opportunity zone funds, experts say, leading to a surge in fundraising in recent weeks.

In April, professional services firm Novogradac & Co. said 406 qualified opportunity zone funds listed on its site had raised more than $10B in equity before March 13 when the president declared a national emergency. Since the start of January, more than $3.3B has been raised and more than 100 new funds have been added to the list.

But after fundraising paused slightly, it ramped back up, experts said.

A host of opportunity zone deals that had been in the works prior to the crisis have closed on their construction financing and broken ground over the last month, in part because of the nature of the deals. A large portion of the opportunity zone projects are apartment buildings with relatively affordable rents in emerging areas, a type of development investors and lenders remain bullish on despite the economic crisis. 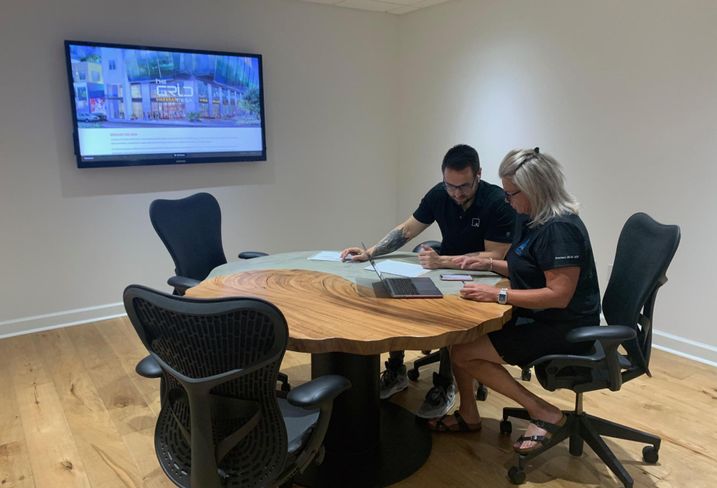 Opportunity zone deals have also managed to close during the crisis because of the long-term nature of the investments. To realize the program’s full benefits, investors must hold onto the asset for 10 years. This has given investors confidence that the projects will have time to make it through the recovery and realize value appreciation before they plan to sell.

In the D.C. area, at least four opportunity zone developments have begun construction since March. In Los Angeles, the Ventus Group is in the process of transitioning its $450M mixed-use development project in South Los Angeles next to the University of Southern California into an opportunity zone investment, and start building shortly thereafter.

In Chicago, Peppercorn Capital plans to begin construction on two retail centers totaling 80K SF in the Fulton/West Loop neighborhood in the next two months, said Denny, who owns Peppercorn.

Tampa Bay-based Opp Zone Capital launched a $40M fund shortly after Florida shut down the state in April. The following days, officials at the firm said they were surprised by the high number of calls and emails they received about the fund.

Passed as part of the Tax Cuts and Jobs Act in 2017, the program allows an investor to roll over capital gains into a qualified opportunity zone fund, which then becomes the investment vehicle to invest in a business or property long-term in any of the more than 8,700 designated census tracts across the nation in return for a tax break, which includes tax-free gains if the investment is held for at least 10 years.

The goal of the program is to provide economic growth and jobs into areas that historically haven’t seen much development.

Critics have said the program only benefits wealthy investors — and the program has been plagued by corruption allegations and backroom dealings — and could accelerate gentrification and displacement in neighborhoods that were already attractive development markets. 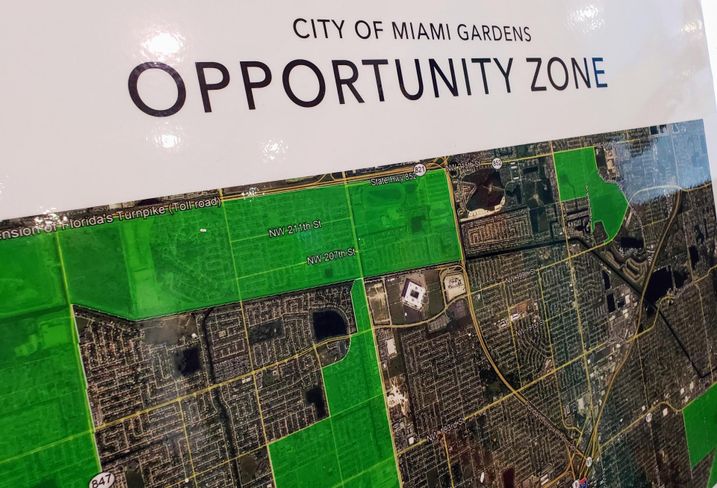 Whether the program will ultimately achieve its goals remains to be seen, but the surge in activity opportunity zone stakeholders had been waiting for appears to have begun in recent weeks.

“I think as soon as the pandemic hit, a lot of people pulled money out [of the stock market],” Opp Zone Capital co-principal Jeanine Blake said. “They may have lost some money but still had some gains and now, they are all wondering, ‘What the heck do I do with it?’ We’re seeing a lot of that.”

Qualified opportunity zone funding has steadily risen since Novogradac began tracking fundraising numbers in May 2019. And while the firm says there have been more than $10B placed into funds, it believes the amount raised is probably much higher, since the survey is voluntary and there is no reporting requirement involved with opportunity zone investments.

All that capital — $4.5B raised before December, for which the clock is ticking — is still being deployed, pandemic be damned.

Part of the reason the deployment is still happening now, experts said, is clarity in the rules. After two years of back-and-forth with stakeholders, the Department of the Treasury finalized the opportunity zone program’s guidance in December, giving investors final rules and regulations for them to act on.

“We have a significant amount of dry powder,” PTM Partners' Mike Tillman said. “We’re looking at a handful of projects right now. Given what has taken place in the market, there’s definitely reason to believe we’ll see some more interesting opportunities, coupled with the fact regulations are now complete, so there’s more clarity.”

PTM raised $98M in February to invest in opportunity zones on the East Coast.

“A lot of the traditional players are playing defense right now, but because opportunity zones are a relatively new program, those funds are in development they don’t have operating assets,” Meyer said.

Bridge Opportunity Zone Strategy Chief Investment Officer David Coelho said last year, his company deployed $950M into 21 OZ transactions. This year, it hopes to be just as active, especially in what it sees as a down market.

Coelho said land pricing has dropped and construction costs are down. Since many developments take at least a year to build, the current downturn has benefited OZ investors. He said he has seen some traditional capital sources pull out of deals in recent months, creating avenues for opportunity zone investors to step in. 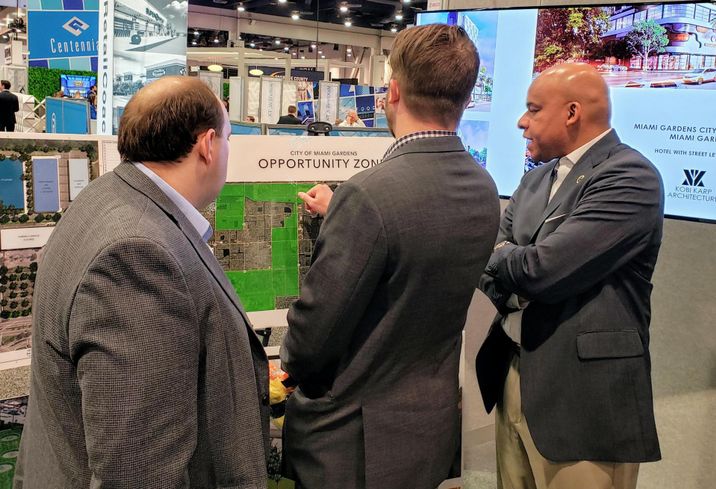 “A lot more deals are coming back our way,” he said. “A lot of deals had capital lined up and that capital has fallen out. I think that trend will continue. It’s good for our strategy and for opportunity zones in general as non-opportunity zone capital decides to sit on the sidelines and consider whether there will be distressed opportunities, I think they’ll be less focused on development.”

Five months into this year — and two months into the pandemic — his team expects to surpass that number. They are currently working on financing or refinancing five opportunity zone deals in California and Colorado, he said.

Davies said since many opportunity zone deals have residential components, they have been easier to finance. Other asset classes, especially retail and hospitality, have been hit hard and capital has shied away.

“2019 was a good year for [capital] gains,” Davies said. “There is a tax benefit to an opportunity zone deal. Investors don’t need as juicy of a return, so it’s more feasible to get it done.”

Coelho said it helps that many opportunity zone investments come in the form of equity, making their deals easier to finance.

“A lot of these, the financing is either not required at all. In that case, it might be an all-cash build, so they already have a huge equity commitment,” he said. “Investors need to deploy cash into projects anyway, so that’s why you’re seeing a high likelihood of those things getting finished vs. something that needs outside financing.”

Some see investors putting money into opportunity zone funds as a way to hedge against an uncertain economic future. Many states and cities are facing devastating budget shortfalls and investors are reading the writing on the wall.

“There is a near-universal agreement that at some point in the future, taxes are going to go up due to all of the government spending,” Greenberg Glusker Tax Partner Michael Wiener said. “With an opportunity zone investment, you sort of have a hedge against that. If you fulfill the 10-year hold, [the profits are] not taxed. It’s these investments that make these projects even more valuable in this current climate.”

The Centre for Public Impact Senior Associate Ryan Goss said with the uptick in opportunity zone investments, it is important to remind investors and developers that this program has a bigger social impact purpose than tax-free gains.

“You are investing in a long-term vision of the community,” Goss said.

Opp Zone Capital co-principal Edmon Rakipi said given the current market, this is the best time to invest in a real estate program that could provide a hefty tax benefit for the investors and help community members in distressed areas.

“You can do good and do well in the opportunity zones program,” Rakipi said. “You’re choosing to put capital in these underserved communities that normally do not see it, and on top of that you get the tax incentive. On our end, that’s very important. We can ensure that we are living up to the spirit of the opportunity zone program. Overall, the goal of the fund is to revitalize and rejuvenate these communities.”