WeWork continues to evolve beyond a coworking company and into a multi-channel service for all manner of office users, including non-WeWork members.

WeWork's office and property management arm, Powered by We, has signed its largest client yet in financial services giant UBS. The Swiss-based company has tasked WeWork with renovating the 100K SF U.S. headquarters of UBS Wealth Management in Weehawken, New Jersey. 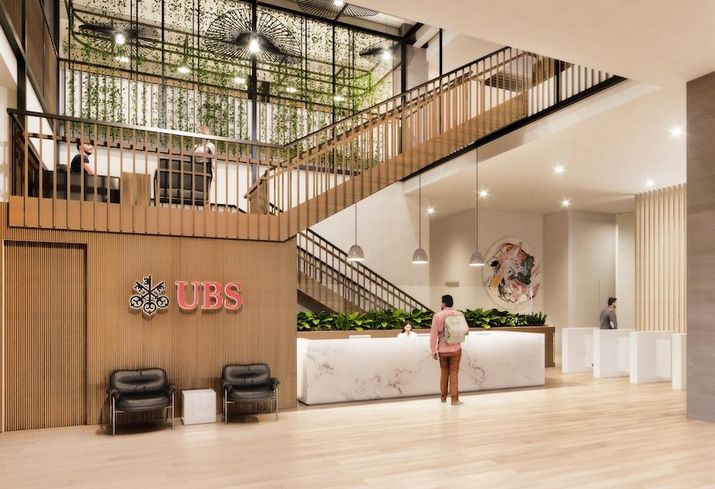 Courtesy of WeWork
An internal rendering of WeWork's Powered by We redesign of UBS Wealth Management's American headquarters in Weehawken, N.J.

The redesign is expected to be finished in 2021. It will focus on common and flexible areas that can serve as both social and workspace, like a cafeteria and auditorium each with adjacent lounge spaces that can open up for meetings or social events.

The entire building won't be turned into the controversial open office, but Powered by We will add more greenery and natural light to give the office more of an airy, open feel. In addition, the main elevator banks in the lobby will be replaced by an open staircase leading up to a café to encourage interaction between employees and customers entering and leaving the building.

WeWork also will leverage its analytics and research platforms to optimize the space at the outset, and to continually monitor its efficacy for future improvements. Powered by We also offers in-house staff to manage the office, but UBS has not decided on whether or not to use them, Bloomberg reports.

This deal adds to the 30 offices worldwide serviced by Powered by We, which Bloomberg said generated $13.7M in revenue this past year after $12.7M was spent in build-outs. Powered by We is one of an ever-growing number of revenue streams WeWork has created to justify its valuation, which could be as high as $40B.

Several large, pre-existing companies have signed leases with the company, some for entire WeWork locations. Those "enterprise members" now make up 25% of WeWork's total membership base, according to a release. For smaller companies expanding beyond WeWork's walls, the operator has launched what seems a lot like a brokerage to help them find their next office.