Will The AI Revolution Kill The Back Office?

All it could take to empty out millions of square feet of back-office space in the next 10 years is a few powerful computers. 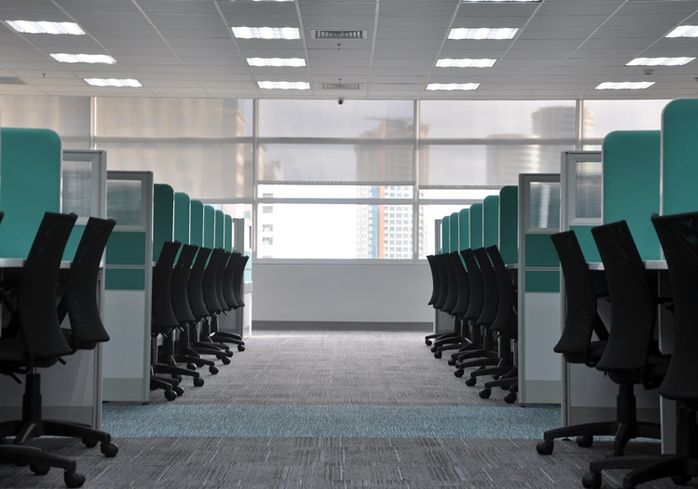 Thirty-six million jobs, or 25% of all jobs in the U.S., are under heavy threat of being replaced by artificial intelligence, according to a 2019 report from the Brookings Institute. Another 52 million, more than a third of all U.S. employment, are considered at medium risk of being taken over by AI.

“Professions that are often about analytics, number crunching, performed by midlevel individuals … that stuff will be at risk," said Brookings Institute Senior Fellow Mark Muro, who authored the report. “Some of this back-office [work] is what disappears, and that involves a lot of real estate.”

For investors into office buildings, the loss of office-using employment is a scary prospect, especially as companies are consolidating their real estate footprints and assigning more employees into less space. It could very well render many office buildings that are now hubs for back-office operations obsolete and leave investors stuck with buildings that are difficult to refill.

Now, many are following the example of companies and their site selection experts by focusing on markets that have a highly educated talent pool.

OA Development partner Brian Granath said the potential for disruption caused by AI makes the company more cautious. He said it also makes OA Development consider investments market by market, and "would absolutely give us pause" in some secondary or tertiary markets.

According to a July study by global consulting firm McKinsey & Co., 8.1 million office support jobs are at risk of being replaced by automation and AI by the end of the decade. As of 2017, the office support workforce tallied 20.7 million workers.

“Companies are squeezing more and more people per square foot,” Granath said. “But we haven't yet noticed the demand decrease because of AI. But I think in the next five years, it's coming.” 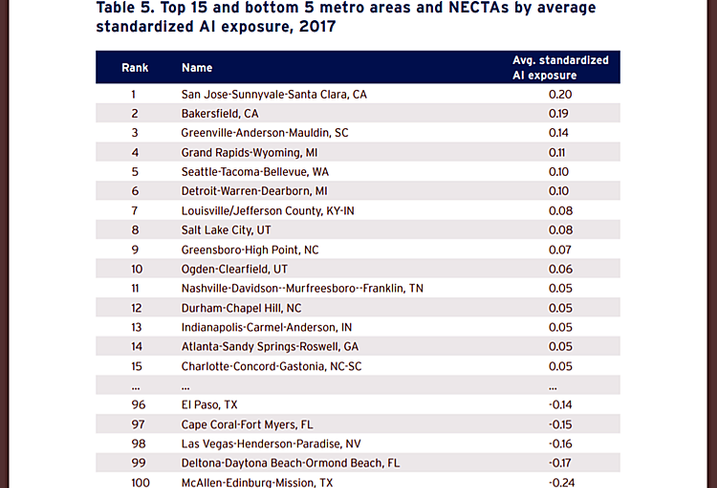 The Most Vulnerable Markets

It is hard to gauge just how much of the billions of square feet of office space in the U.S. is used for back-office and clerical office functions. But experts can guess which cities’ workforces will be most at risk from the impact of AI.

Toledo, Ohio, ranks as the top major market in the U.S. where most job functions are at some risk of being replaced by AI and automation, according to Brookings. Toledo’s top employers include ProMedica Health Systems, Mercy Health, Whirlpool Corp. and FCA USA, which makes Chrysler vehicles. Since the Great Recession, Toledo’s job market has been strong, with its unemployment rate falling from 12% in 2009 to 4% by the end of 2019.

But, according to Brookings, nearly half of all job functions in Toledo face some risk of replacement, with 29.7% of them at very high risk.

Even with an unemployment rate that dipped below 2% last year, Greenville, South Carolina, ranks second in the U.S. among markets with the most job functions at risk, according to Brookings. Like Toledo, many of Greenville’s top employers are focused on healthcare and manufacturing.

AI’s threat to white-collar jobs isn’t limited to the Rust Belt. Some of the most tech-talent-rich markets in the U.S. are also exposed to job loss due to AI, including San Jose, California, which, earlier this year,  KPMG declared was on the path to eclipse Silicon Valley for having the most tech talent in the country.

“High-tech digital services such as software publishing and computer system design — that before had low automation susceptibility — exhibit quite high exposure, as AI tools and applications pervade the technology sector,” the Brookings report states.

Places that rely heavily on tourism, like Las Vegas or South Florida, have fewer jobs that can be replaced by AI, Brookings found. Maybe counterintuitively, many small towns are also better insulated than some bigger cities.

“Tech jobs tend to be concentrated in major metros, and increasingly so. So if there is going to be dislocation of higher-value functions in finance and insurance and tech, those jobs are predominately in major metros,” Wassmansdorf said. “I think we're starting to see some of those impacts.”

Wassmansdorf said there has been a surge in the number of chief digital officers, whose focus is on digitizing the workplace, in C-suites. And those roles are being found in industries he least expected: insurance, communications and media, and banking.

Education has become such a critical factor when companies consider cities to locate offices that many local economic development agencies involve college and university presidents in their outreach efforts, The Boyd Co. founder John Boyd said. The larger the educated talent pool in a region, the more likely a company will consider it.

Many companies are looking beyond institutions of higher learning, evaluating whether the kindergarten through 12th-grade public school system is producing college-ready graduates as well as students specializing in trades or high-skilled jobs, Wassmansdorf said.

“Whereas 10 or 15 years ago, we were concerned primarily with university and college education ... more and more we're asking about the K through 12 system and what the long-term talent pipeline trajectory looks like, including do people stay, or do people go when they finish high school or they finish college locally?” Wassmansdorf said. “It's one thing to produce talent, it's another to keep it.” 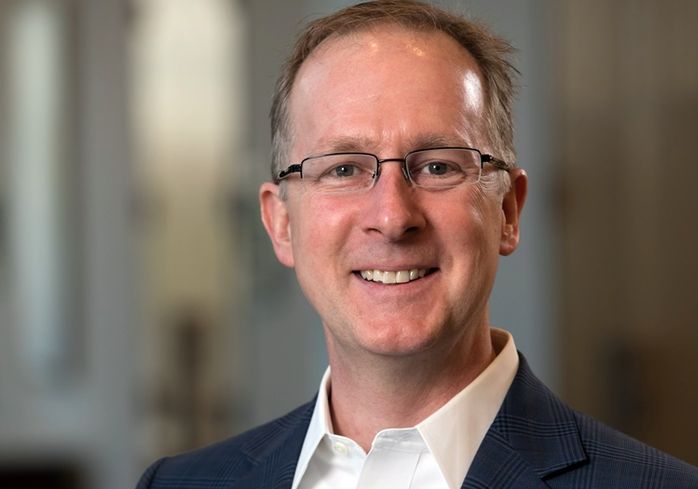 Montreal is one of the North American cities that has embraced artificial intelligence by becoming a center of AI innovation. Over the past decade, the city has focused on growing its AI workforce and attracting companies focused on AI, and it has paid off. Montreal has boomed, becoming the second-fastest-growing city for high-tech jobs in North America behind Boston.

Cities with high risks for AI replacement but with a pipeline of tech talent should pay attention, Boyd said.

“It's a wake-up call to successful second-tier back hubs, like Jacksonville, for example, to begin investing and promoting itself as a center of excellence of artificial intelligence,” he said.

Wassmansdorf also said cities should not only focus on their tech talent but the wider range of college disciplines.

“What is a tech company today? Human-machine interface, you need to create a user experience, which means you should probably be interested in their psychology and sociology department. Tech companies now are challenged with the ethics of AI. Where do they get that talent? That's psychology. That's law,” Wassmansdorf said. “You can't just say, ‘Hey, we produce 1,500 software engineers a year, come locate.'”

The Buildings At Risk

OA Development owns $350M in commercial real estate entirely focused on suburban office parks, much of which is used as back-office operations. Granath, who oversees its acquisitions and property management, said he looks first at the underlying education of local demographics before buying a property.

“It's very important that the areas we're investing in have a positive long-range horizon so the employers will want to be there,” Granath said.

The rise of AI will create new jobs and new opportunities for companies. That will only emphasize the trend that the U.S. office market has experienced this past decade: companies trying to attract talent with offices rich in amenities in urban environments.

Aside from being cautious in suburban office investments in secondary markets and small cities, Avison Young principal Steve Dils, citing the Brookings report, said investors should also be wary about owning offices in strong technology markets.

“If you’re in Silicon Valley, and you [own] a mid-rise building that they tend to build out there. What are the people doing that are in those?” Dils said. “Yeah, that could have a potential impact.”

Suburban office buildings won't disappear. But landlords need to differentiate their properties if they want to survive the AI revolution.

“The idea of building an office campus out in the suburbs not connected to anything [is] a challenging investment proposition now,” Wassmansdorf said.