Are You A Millennial Looking To Buy A Home? It Could Take Up To 32 Years

It is going to take more than forgoing avocado toast to spur millennial homeownership, as new research shows a staggering disparity between millennial debt and average salaries.

Only 32% of the country's largest generation (which consists of 75 million Americans) own homes. Those that do are flocking to interior markets, which tend to be cheaper and more cost-effective than most coastal markets.

As the front line of millennials enter their mid-30s, financial security is not guaranteed. Instead, the generation is beleaguered with student loan debt and salaries that are 20% lower than what their baby boomer parents earned at that age, according to a report by real estate research site Abodo.

The average net worth of a millennial is $10,090, or 56% less than what it was for baby boomers at the same point in life, according to Federal Reserve data.

Coupled with rising home prices, it could take decades for a millennial to be able to afford a down payment on a house in places like San Diego or San Francisco. This may be why more millennials live with their parents than any other generation in the last 130 years. 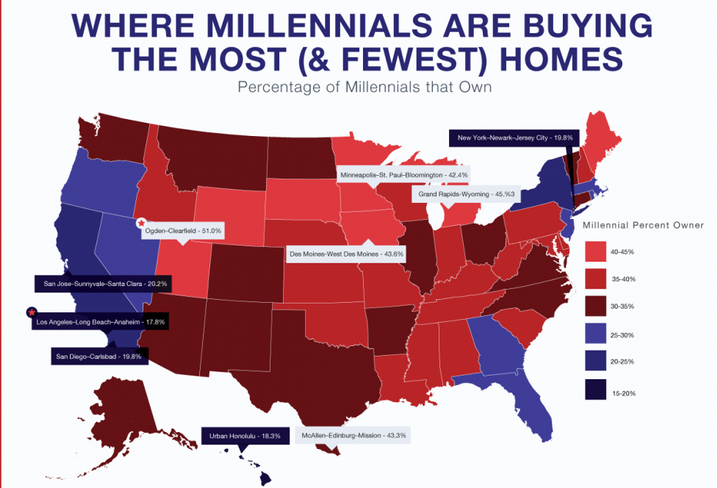 Courtesy of Abodo
More millennials are buying in the interior U.S. than pricier coastal markets.

Astronomical home prices in coastal markets have led millennial homeowners to more affordable interior cities like El Paso, where they can get more bang for their buck. At nearly $143K, the average house bought by a millennial in El Paso is worth 4.6% more than the market average. San Antonio and McAllen are two additional markets in the Lone Star State where average millennial home prices exceed the MSA's average home cost.

Millennials living in the country's biggest cities, including New York City, Boston, San Francisco and Los Angeles, are not as fortunate.

“Millennial-aged buyers are facing a highly competitive market here in the Greater Boston area,” Nickerson Real Estate Partners founder and principal Lisa Nickerson said. “Even those who are well-compensated, or may have access to funds and want to take advantage of the low interest rates, may be challenged buying in Boston as supply is limited and prices continue to rise.” 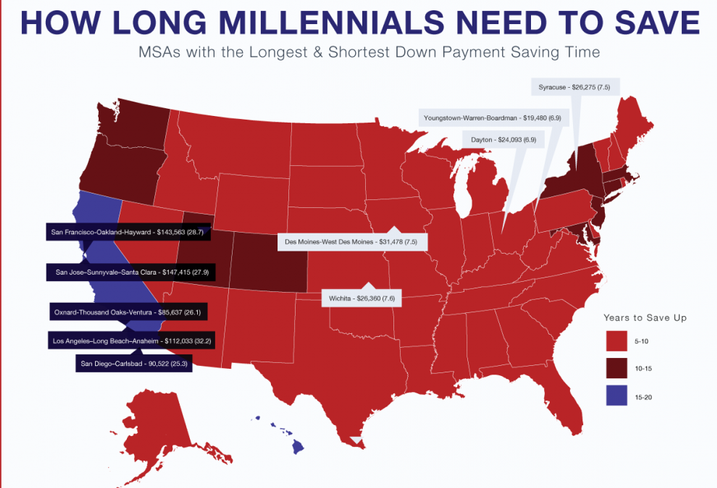 Courtesy of Abodo
It takes as long as 32 years in some parts of the U.S. for millennials to save up for a down payment on a house.

Nickerson said millennials have started looking for properties in more suburban markets outside the city. These markets tend to still have the same live-work-play dynamic that urban markets do, including functional transit stations that allow for easy commutes into the city without the cost burden of a car.

Nickerson said many are shrugging off the idea of homeownership entirely, preferring the services and amenities of a building without the repair and maintenance costs.

“Quite frankly, some aren’t worrying about saving because they’re happy with their current lifestyle and not looking to buy any time in the near future,” Nickerson said.