How A Prolonged Government Shutdown Could Impact Commercial Real Estate

The federal government shutdown entered its 13th day Thursday, just the eighth shutdown ever to eclipse the 10-day mark. The shutdown has begun to impact facets of the commercial real estate industry, from multifamily loans to government contracts to retail spending — and the effects could be greater if it does not end soon. 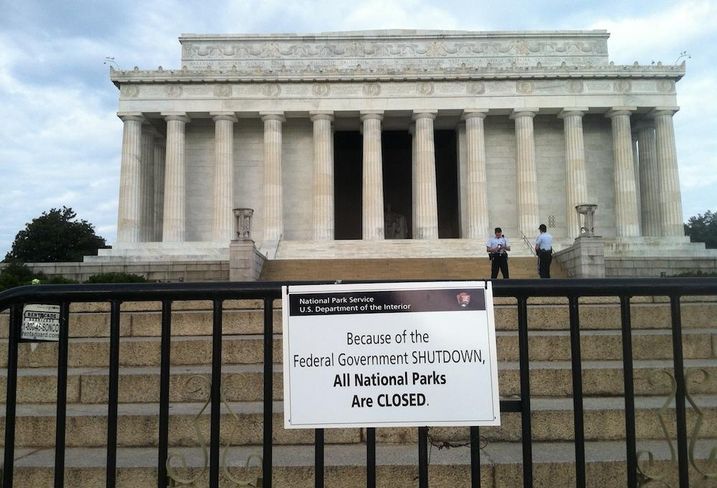 Increased political gridlock, with Democrats taking control of the House of Representatives Thursday and President Donald Trump still insisting the federal budget include funding for a border wall, has made the prospect of passing a spending bill to end the shutdown appear bleak. If it continues to Jan. 12, it would become the longest government shutdown in U.S. history, and it could potentially drag on longer.

This shutdown, the third and longest of Trump's presidency, is technically a partial shutdown, with some agencies funded from previous appropriations bills. But 380,000 federal employees have been furloughed from their jobs and another 420,000 are working without immediate pay.

Reduced spending from those 800,000 employees, and the ceasing of the functions they performed in government, have created ripple effects across several major commercial real estate sectors. 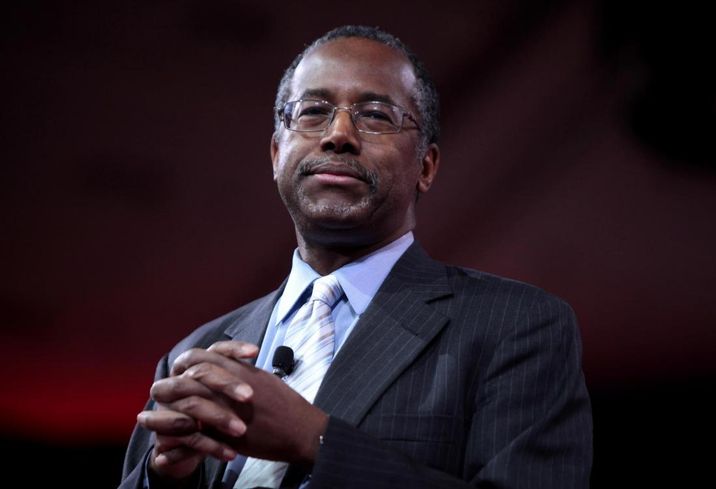 The Department of Housing and Urban Development is short-staffed during the shutdown, limiting the processing of loans for housing projects and enforcement of federal housing regulations. Of HUD's 7,497 employees, just 343 were projected to work full time during a shutdown, according to guidelines the agency released last year.

The Federal Housing Administration will endorse new loans in its single-family loan program, but it will make no new commitments in the multifamily program, according to a report from the National Association of Realtors.

"Right now there's a housing shortage for owner occupancy and rental, so if there's a delay in approving some of the multifamily projects, that is not good news," NAR Chief Economist Lawrence Yun told Bisnow. "Housing was already on a bit of fragile ground, and now the shutdown is not adding to the strength. It is an unambiguous negative to the real estate market and to the economy."

The government's enforcement of fair housing regulations and quality inspections has been delayed during the shutdown, NPR reports. HUD's guidelines show just nine of 454 employees in the Fair Housing and Equal Opportunity Office were projected to work full time during a shutdown.

The processing of forms in the Internal Revenue Service, including some that are required by lenders for housing loans, has been suspended during the shutdown, according to NAR. Fannie Mae released temporary guidelines Wednesday to help process mortgages during the shutdown if the borrower is a furloughed federal employee or needs forms from the IRS, HousingWire reports. 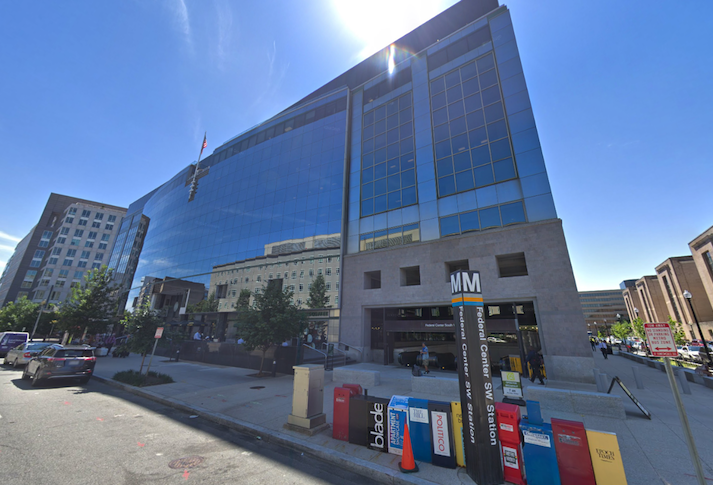 Small businesses will have a more difficult time obtaining loans during the shutdown, potentially affecting the booming PropTech sector and other startup companies looking to expand their office space, plus small retail businesses looking to open up shop.

The Small Business Administration, in a Dec. 22 Facebook post, said it will remain inactive until further notice because of the lack of government funding. This will mean the agency will not process loan applications that help startups obtain financing, USA Today reports.

Banks could also reduce the loans they provide to small businesses during the shutdown. According to Forbes, small-business loan approval rates at big banks dropped by nearly 20% during the September 2013 shutdown, compared to the same month the prior year.

Businesses that rely on government contracts could also be hurt by the shutdown. Departments representing roughly a quarter of the government's $1.24 trillion in discretionary spending have had their funding lapse, the Washington Business Journal reports, cutting off the funding source for contractors that rely on those departments. The Pulse of GovCon, a Northern Virginia-based government contracting market intelligence firm, said companies with strategies dependent on the Department of Homeland Security, State, Transportation, Agriculture, Justice and others should be concerned.

D.C., Maryland and Virginia receive the most federal contract dollars, followed by New Mexico and Connecticut, according to a WalletHub report released Thursday.

"The states that have the highest federal contract dollars per capita are some of the most affected during this partial government shutdown," WalletHub analyst Jill Gonzalez wrote in an email. "Until funds are unblocked, contracting business will come to a halt."

Landlords who lease office space to federal government agencies through the General Services Administration likely don't have to worry just yet, but a prolonged shutdown could present problems.

"It's not going to hurt your investment," JLL Managing Director Joseph Brennan, who runs the firm's Government Investor Services Practice, told Bisnow ahead of the January 2017 shutdown. "They're going to pay the rent, and you should fulfill your lease obligations ... The broader question I don't think anyone has the answer to is what happens if it goes 60 or 90 days and gets into two or three rent payments." 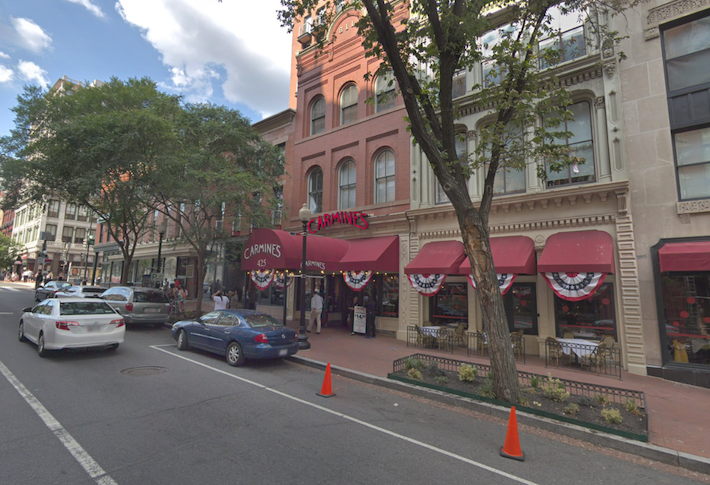 Google Maps
Carmines in Downtown D.C., one of several restaurants offering special deals to federal workers during the shutdown

Hundreds of thousands of employees not receiving paychecks could reduce the level of spending at retail establishments, especially in areas with high concentrations of federal workers.

Restaurant Association of Metropolitan Washington CEO Kathy Hollinger said the group is hearing from D.C.-area restaurant operators that foot traffic has been lighter and business has been slower during the shutdown.

"The pressure the shutdown puts on the local economy is tremendous," Hollinger said. "Local, independently operated restaurants rely on foot traffic, and a lot of that business is created by federal employees, as well as visitors. The impact is far-reaching and severe."

Restaurants and bars in the nation's capital have already begun courting federal workers who may be hesitant to dine out while their pay remains in flux. At least a dozen D.C. restaurants offered special deals to federal workers as of Tuesday, WTOP reports, including free sandwiches during lunch at any of celebrity chef José Andrés' restaurants.

Breweries around the country could face challenges during the shutdown. The Alcohol and Tobacco Tax and Trade Bureau posted a notice on its website that operations have stopped during the shutdown and submissions will not be reviewed or approved until funding is restored.

This means breweries are unable to get new beers or labels approved, delaying their ability to release new offerings, according to a newsletter from Craft Beer Cellar.

"We work hard to get ahead of our business and this just wrecks our plans," Bill Butcher, the founder of Alexandria, Virginia-based Port City Brewing, wrote in the Craft Beer Cellar newsletter. "If we can't get our new labels approved in a timely manner, then it affects our entire operation. It hurts our employees, our farmers who provide our grain, our hops suppliers, our label printers, our box manufacturers and ultimately our distributors, retailers, and beer drinkers." 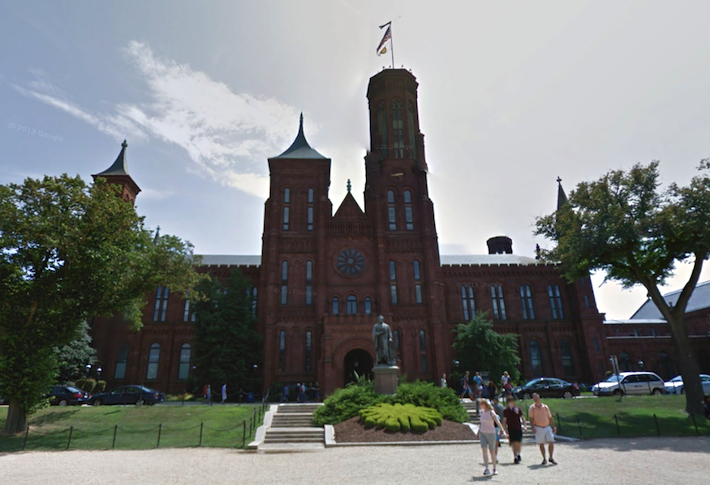 Google Maps
The home of the Smithsonian Institution, which has closed all of its museums during the government shutdown

National parks and federally funded museums from D.C. to Alaska could see a drop in visitors during the shutdown, potentially reducing tourism and hurting the hospitality industry in surrounding areas.

The Smithsonian Institution was able to keep its facilities open during the holidays, but the continued lapse in funding forced it to shut down all 17 of its D.C. museums and the National Zoo Wednesday.

"During the holiday season when visitors were here in D.C., the impact was felt but it was somewhat held at bay because many local attractions remained open," Hollinger said. "Now that we're going into the first week of January and the Smithsonian and National Zoo are impacted, there is more concern."

Major National Parks across the country have also been impacted by the shutdown. Many have remained open but have had critical functions stopped, leading to waste overflows and unsafe conditions.

Yosemite National Park remains open but its restrooms, visitor centers and trash collections remained closed, the Los Angeles Times reports, and human feces have been seen on roads at the park. Visitors are also able to access Joshua Tree National Park in California, but have found overflowing trash cans and locked restrooms, the Washington Post reports.

As the government shutdown continues on without a clear end in sight, it remains unclear when everything from waste cleanup to multifamily development loans to retail spending will go back to normal.